Swap out your wheels, cockpit, saddle, fork, and presto — a new bike! Well, sort of. Introducing the Convert FF1.

Ask any cyclist how many bikes they actually need, and almost all of them will tell you, “One more than I have.”

To be sure, owning a large stable of bicycles is pretty impractical for most folks’ needs (and budgets). But owning two or three for different activities — like commuting, mountain biking, and maybe a swift-paced weekend road ride — isn’t so far-fetched.

Enter the Convert FF1, launched at last month’s Eurobike show. In the FF1, Convert offers a single bicycle frame (plus derailleurs and cranks) with add-on kits that convert the bike between commuting, road riding, and mountain biking. 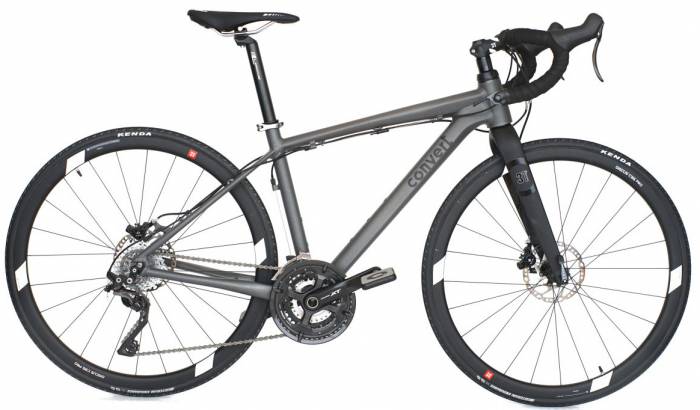 At its core, the Convert FF1 is a 7005 aluminum-alloy frame with the basics for a bike build but not the goodies. You get cables, headset, and Shimano XT 8000 groupset with Hallowtech II crankset. Mind you, that includes a 3x setup.

All in all, it’s a pretty basic frame — standard aluminum, a mix of components, and unaggressive geometry. Yet it costs nearly $1,400.

But the real selling point, according to Convert, is the add-on capability. The German brand offers four kits to complete the bike build. There’s a trekking kit, road kit, and two mountain kits (standard and “pro”). According to the manufacturer, swapping out the kits’ wheels, fork, saddle, seat tube, and handlebars takes less than five minutes.

The trekking kit is the entry-level, commuter package. It comes with an aluminum fork, flat bars, disc-equipped Exal DC19 wheels with Kenda 35c hybrid tires, and an 11-speed SunRace 11-36 cassette. This seems adequate for casual cyclists looking for a ride capable of grocery runs and enough gnar to hop the occasional curb. 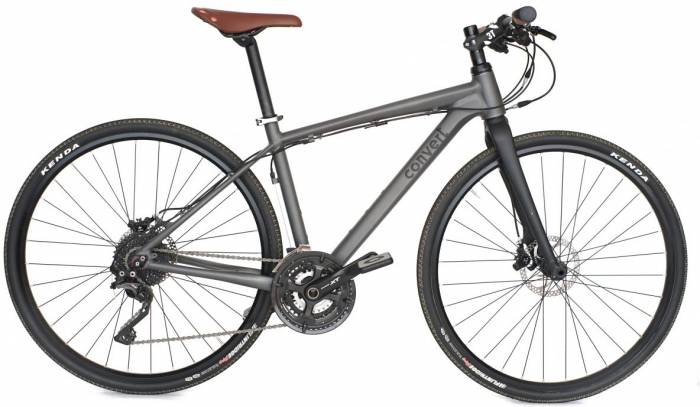 That results in a 25-pound bike and adds another $1,000 to the sticker price. But that’s just the start.

You can also add a road kit to the mix for a more aggressive ride. It comes with a 3T Luteus II carbon fork (nice), 11-speed SunRace (11-32) cassette, and alloy 3T Discus Pro wheels with 28c Kendas. Fully built, the road bike weighs in at 23 pounds, which is by no means light. The wheels and fork are respectable and make up a healthy chunk of the $1,700 it costs to add this kit to your cart. 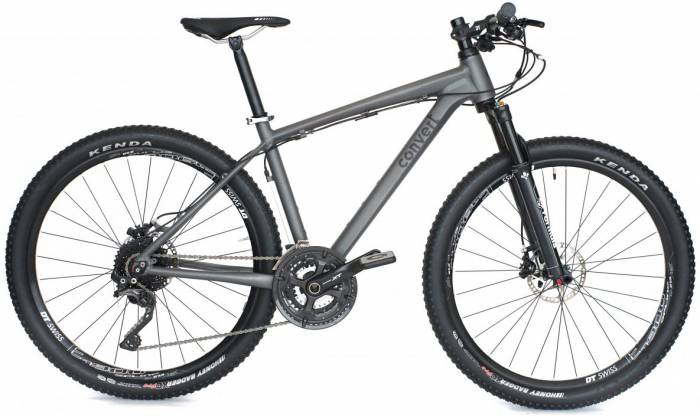 The “pro” MTB kit costs $1,700 and upgrades the fork to a Formula 33 with 100-mm travel, DT Swiss X 1900 rims, Kenda Honey Badger treads, and an improved SunRace cassette. This sheds 2 pounds off the standard kit.

In all, the Convert FF1 aims to save some garage space — and probably a few spousal arguments — by axing the bike quiver to one. And that’s a wonderful idea.

But when that single do-all bike costs $1,400 for the frame alone, $2,300 for a midlevel commuter, and a whopping $5,300-5,900 for a full set of conversion kits, we have to wonder who will invest in this thing. Most cyclists would gladly sacrifice space to save a few grand and have three purpose-built bikes for varying adventures.

But if space is the primary consideration and you just need a bike capable of tackling most pursuits — if not dominating any — Convert is taking orders for the FF1 now. The brand said it expects delivery to begin March 2019, teasing some “early bookers” discounts for those who buy in now.

Up Next: Maximize Your Training for Epics: How to Be Ready on Race Day

Saving…
Maximize Your Training for Epics: How to Be Ready on Race Day
Orbea Gain Review: You’d Never Guess It Was an E-Bike
×