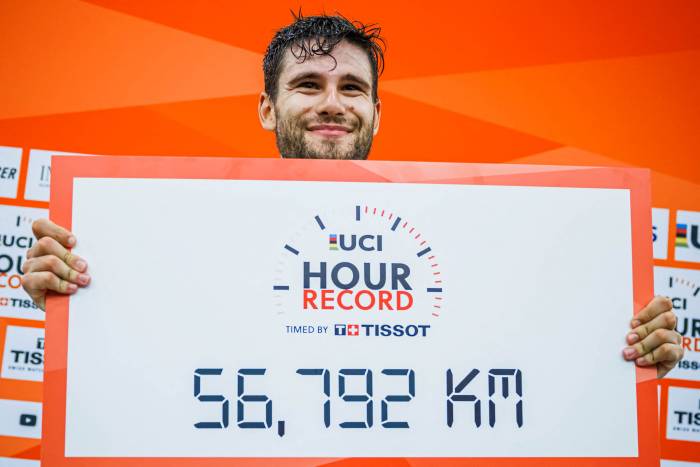 Filippo Ganna poses with a placard after breaking the hour record with a distance of 56.792 km in the Velodrome Suisse on Oct. 8, 2022; (photo/Valentin Flauraud via Getty Images)

So many cycling races throughout the season offer exciting storylines and characters.

Downhillers thrill fans with massive jumps and steep terrain, and road cyclists marvel at the grit of world tour riders who cover thousands of miles in the Tour de France, Vuelta a España, and Giro d’Italia. Gravel and cyclocross aficionados enjoy seeing riders struggle with new obstacles and extreme distances.

But one event in cycling has long held a place as a unique proving ground that only the fastest riders even consider attempting: the world hour record.

Unlike other cycling disciplines, which include weather, team dynamics, crews, and many other factors that can give riders an edge, the UCI Hour Record is a solitary race in controlled conditions that only the best riders in the world can manage.

Since the 1800s, cyclists have thrown their hats into the ring to set the world record for the longest distance someone can cover on a bike in an hour flat. The race for the record began on penny farthing bikes and has progressed over the years to highly specialized time trial bikes.

The challenge is bare bones. Riders must attempt the record in a velodrome, starting from a stationary position. After that, they have one hour to ride as far as possible. It is suffering incarnate, as they have to hold their focus while giving maximum effort the entire time.

As with other cycling disciplines, the hour record has been fraught with controversy over the years. Riders have tapped into new tech and aerodynamic body positions that have since been banned to gain an edge.

In an attempt to level the playing field across decades of industry development, the UCI in 1997 created two categories for the challenge: the Best Human Effort and the UCI Hour Record.

The Best Human Effort allowed for modern equipment like helmets and bikes designed with an aerodynamic edge, while the UCI Hour Record held riders to similar equipment that was available to Eddy Merckx when he set the record in 1972 at 49.431km.

Chris Boardman took up the UCI Hour Record challenge in 2000 and clinched victory at 49.441 km, a razor-thin margin over Merckx. Boardman already held the Best Human Effort title since 1996, with a distance of 56.375 km.

However, he completed that task using Superman-style handlebars that flattened his body into a position the UCI disallowed, so that effort did not stand for the stricter UCI Hour Record. Ondrej Sosenka upped the ante and hit 49.700 in 2005, though his time was later clouded by doping allegations.

The Women’s Battle for the Unified UCI Hour Record

Another rule change from the UCI in 2014 brought a new era of competition to the hour record. The switch created a unified category in which riders may use any bike that meets UCI standards for track pursuit races.

The men’s benchmark under the new rules stood at 49.700, set by Sosenka in 2005, though there were faster times in the Best Human Effort Category, including Boardman’s. The latest record for women came in 2003 when Leontien van Moorsel posted a distance of 46.065 km.

In 2015, Molly Schaffer Van Houweling edged out the previous record set in 2003, reaching 46.273 km during her attempt at the record under the new unified rules in Aguascalientes, Mexico.

On the men’s side, Jens Voight set a new benchmark in September 2014 at 51.110 km. One month later, Matthias Brandle pushed the distance to 51.852 km. An onslaught of successful attempts followed in 2015.

That year, Rohan Dennis brought the record over the 52km mark with a total distance of 52.491 km. A few months later, Alex Dowsett hit a distance of 52.937 km, followed by Bradley Wiggins, who claimed the crown at a beastly 54.526 km.

Victor Campenaerts took up the challenge in 2019 after a lull following the 2015 rush. He set a new record of 55.089 km. Ineos Grenadier’s Dan Bingham brought the record up to 55.548 in August 2022, setting the stage for his teammate Filippo Ganna to make his attempt earlier in October.

Before Ganna’s attempt, Boardman’s Best Human Effort held steady since he set it in 1996. Ganna, however, put down a scorcher of a ride on Oct. 8 that bested both Boardman and Bingham’s records, clocking 56.792 km.

Where Does the Record Go From Here?

The recent hour-record renaissance has seen distances and average speeds previously unheard of. The current record holders, Ganna and van Dijk, established commanding leads in their latest efforts, leaving many wondering whether the record remains within reach for anyone else.

But every time a new record springs up that seems impossible to beat, there is usually, if not always, someone waiting to come out of the woodwork to move the needle even further. Much may come down to UCI rules and regulations and how extensively bike manufacturers can tinker with these bikes to make them even more aerodynamically efficient.

If a rider can find the right mix of power, grit, and tech in the next couple of years, and have a great day in the saddle, the hour record could still be a thrilling test for years to come. 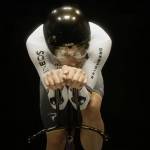 Each run at the Hour Record implicates a dedicated team of specialists, scientists, athletes, and even dreamers. Watch one record effort play out here. Read more…