Diamondback today lifted the veil on a new mountain bike family, the ‘Catch and Release,’ with a highly-engineered rear suspension that impressed our reviewer. It hits the market today.

Squinting through the red dust ahead of me I caught glimpses of a rider slaying the trail. The mountain was his playground, riding as if there was no consequence for error. It seemed almost as if he was skiing in powder; it was otherworldly.

Although it felt like a dream, I was a witness, one of a group riding behind a pro rider while testing a new bike from Diamondback.

Both on the road and trail, Diamondback has been investing in R&D. Its top of the line road bikes were redone for pro teams a few years ago, and now the mountain bikes are getting a big dose of investment.

Diamondback introduces a rear-suspension design today, the “LEVEL LINK.” It might not be as good as Diamondback’s pro riders, but I was favorably impressed with the suspension platform, seen in two styles of bikes and five models, all announced today.

The Catch and The Release

The rear-suspension platform appears on a 27.5-inch wheeled bike I tested, the Release, and a 27.5+ bike, the Catch.

I tested the Release in top spec, the Release 3, climbing and descending the best trails in California’s Santa Ynez mountains outside of Santa Barbara, and was impressed … very impressed.

The Release pedals like an XC bike and descends like a good Enduro thanks to an excellent suspension platform. Diamondback brought in Luther Beale, a grand master of rear suspension kinematics, for the build. He is an excellent bike rider, and a better engineer. His holistic understanding of the many factors that make rear suspension work well are what makes his bikes shine.

One of Luther’s strengths is understanding that all aspects of a rear suspension effect the others. It does not do any good to hone in on one variable like wheel path or anti-squat or chain growth or whatever the in-vogue aspect of frame design might be at the time.

With that said, he hones in on what riders can actually feel. So more on wheel rate or chain growth than anti-squat or the location of the instant center of momentum, for example. A frame design with bad chain growth, like my 2013 Santa Cruz Tallboy, can be felt, I can attest.

This bike separates pedaling forces from the bump forces extremely well. Diamondback likes it enough that they are patenting the design, which is pending now. It is a four bar dual short-link counter-rotating design, which is not new, but this iteration is a significant evolution of prior designs. 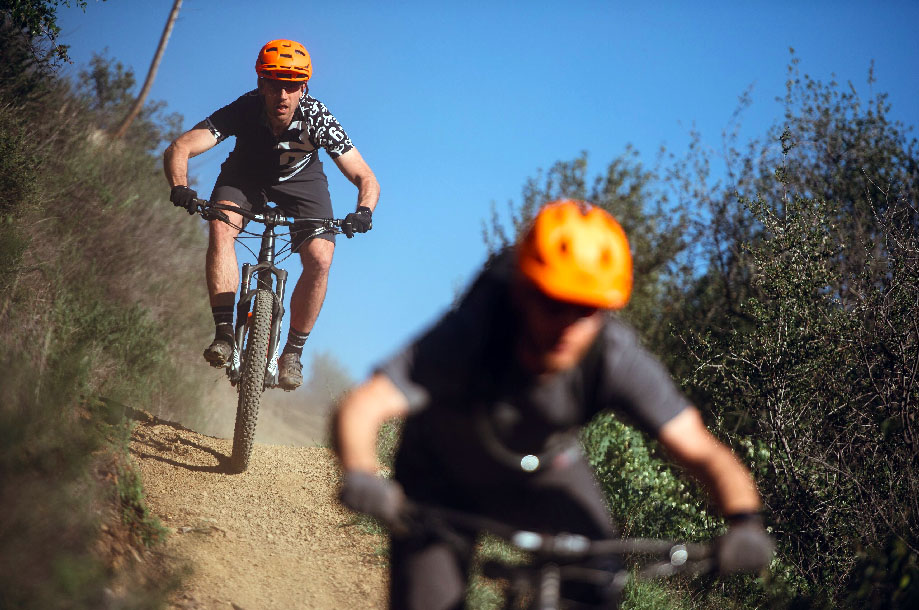 It’s easy to get in way over your head when learning about rear suspension, but the important thing is that you like the way it rides. A bike that does not suck energy from your pedal stroke, with suspension that remains plush and active for traction and control is the ideal. Although the Release is not perfect, the performance of the rear suspension is exceptional.

I rode the Release 3 (MSRP $3,900), which will be available next week. Three years in development, the Release is a 27.5 inch-wheeled bike with 150mm of travel up front, and 130mm of travel in the rear. It weighs 30 pounds and is equipped with SRAM X1 components and a dropper post. The frame alone is 7.25lbs with everything (shock and paint, bolts. etc.) The geometry is modern with a very slack 66 degree front end, fairly long top tube and short chainstays at just 425mm. 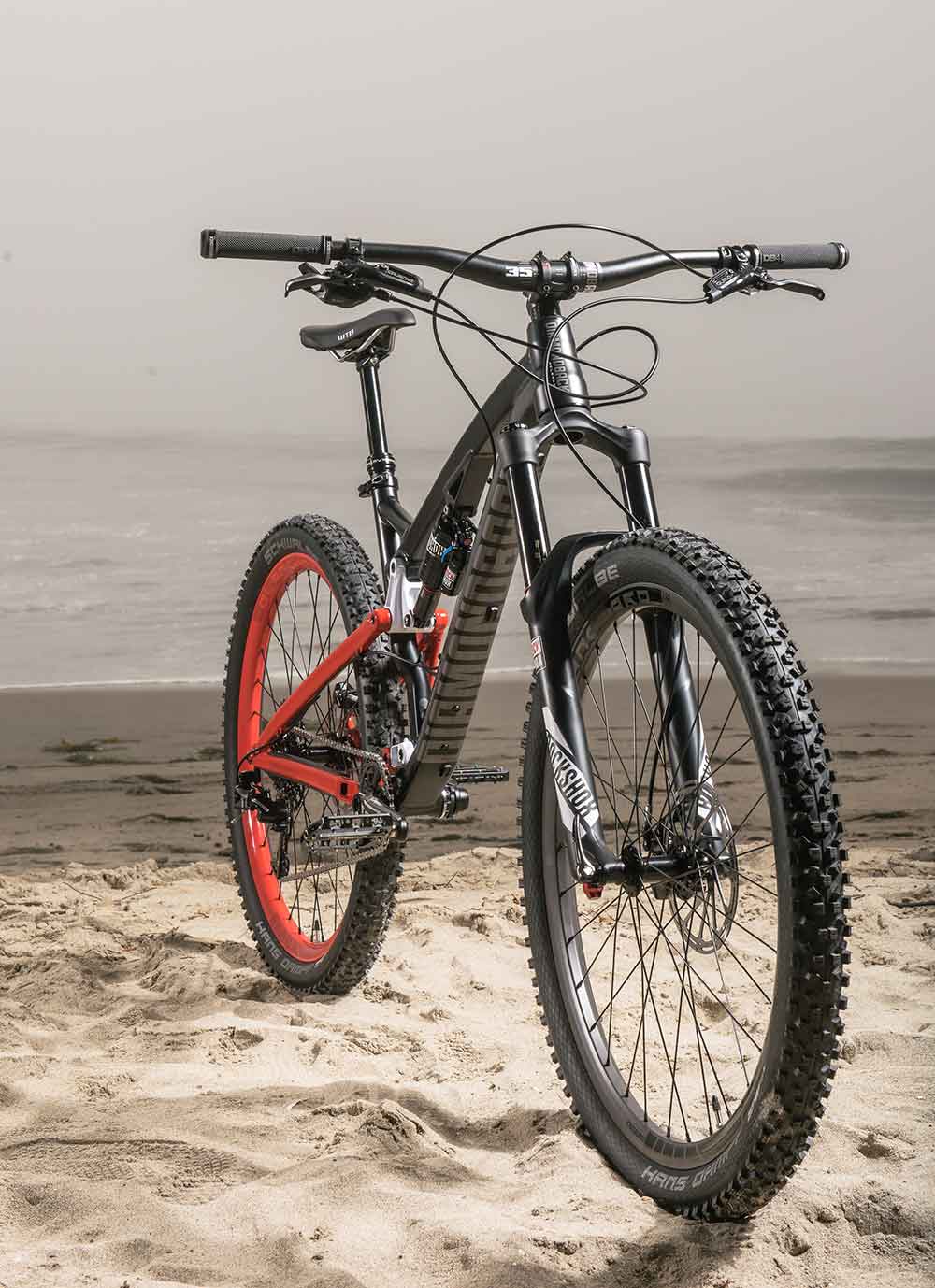 The build puts the money in smart places with the bulk of your cash going to the suspension design and execution, the sweet Rock Shox PIKE front fork, and very nice SRAM components. It saves money in other places, the most notable of which is the aluminum frame, but also the Novatec hubs (cheap, but light), a dropper post that we found a bit unreliable and house brand wheels (although they both rode well and stood up to a lot of abuse).

The Catch, which we did not ride, is similar, but has a less slack front end (read more vertical, such that the front wheel sticks out less) and comes with 27.5+ sized tires. 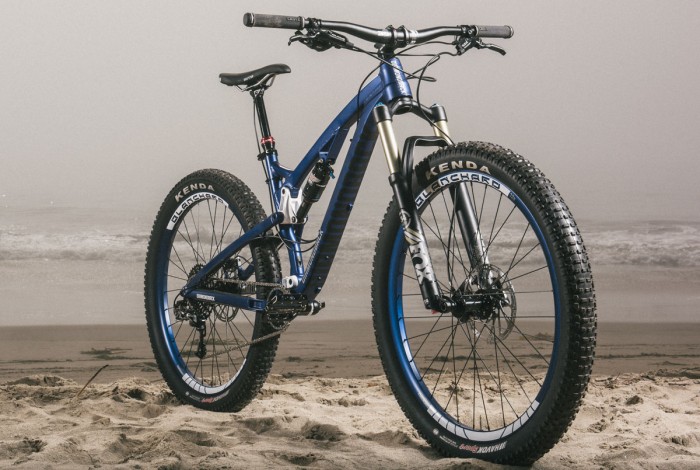 This burgeoning wheel size allows for almost-fat bike style riding over soft terrain. It’s a popular and growing category, especially in adventure oriented bikes. It’s priced similarly as the Release, with two models available, one at $3,500, and a budget version at $2,500.

The Release is very playful. It flicks around corners much quicker than the brand’s previous bike, the Mission.  The short chainstays bring the bottom bracket rearward, which helps snap the bike around turns faster, and aids in descending because it’s so easy to move weight backwards over the rear wheel.

Diamondback says this bike is not specifically a Trail or Enduro or Free Ride or All-Mountain bike. But lets all agree we are not calling bikes these annoying labels anymore because they are too narrow, don’t really mean anything, and should go away. 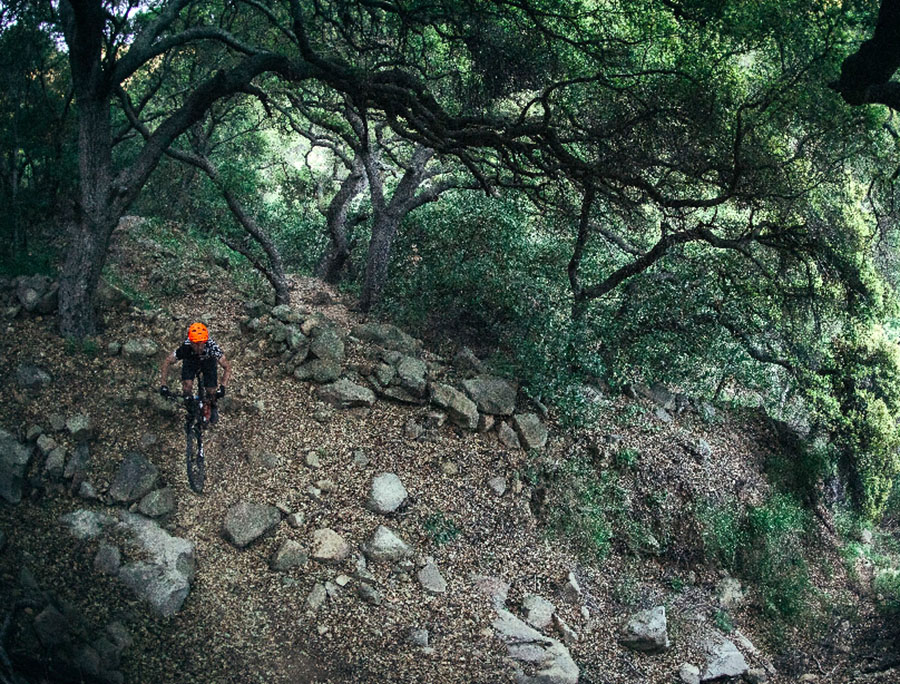 This bike pedals well but you’d be hurting if you raced it cross country because it’s 30 pounds and has bars wide enough to clear a forest. It descends well but doesn’t have nearly enough travel to race DH. For everything else in between it’s extremely capable and huge fun.

I felt a small amount of brake jack through the chatter, but none when the rear wheel had constant traction. The real rave was how well it pedaled, without bob and without reducing the suppleness of the suspension when climbing rocks and roots. Did I already mention the Pike front fork is superb.

The bottom line for most of us is how much fun can you have for how many dollars. The ratio is perhaps as high as it’s ever been with this one. It may not be from a brand you expected, but Diamondback did it.

We rode down the mountainside away from the jumps, ledges, tunneled trail and waterfalls above, down into some traffic and people doing mundane things. But a good day on a good bike had delivered me to someplace special, and the images from above kept flashing through my head. It was hard not to feel like the day might have been a dream.

Up Next: Build-Your-Own Bamboo Bike Kit