A former Israeli fighter plane engineer brings his expertise to a startup company poised to disrupt the cycling industry.

Everysight’s new Raptor glasses eliminate the need for a bike computer by displaying cycling information on a heads-up display (HUD).

I tested the Everysight Raptor for two months, using the glasses on the road and while singletrack mountain biking.

In short: The Raptors, available now for $650, prove a technological tour de force. But they are not without their faults.

The first HUD to hit the cycling market, the Everysight Raptor is a standalone device that gathers its own GPS data. Its OLED projector displays the information it collects onto a half-mirrored screen inside the lenses. This provides an infinity-focused display in the rider’s field of view. This visual overlay on a real-world backdrop is called “augmented reality,” or “AR.”

This technology benefits the rider by allowing them to keep their head up while viewing ride data. That means heart rate, power, speed, distance, and maps remain visible without the rider looking down to view a handlebar-mounted display.

Plus, the Raptor’s processing power is huge: There’s not much it can’t do. To take a 1080p video, simply say, “Go Everysight, record video.” Swipe a finger forward, backward, or down along the temple sidepiece to negotiate the onboard menu. Tap to listen to music stored on its 32 GB of memory.

Perhaps most importantly, the Raptor allows riders to leave the phone and Garmin or Wahoo behind. Its built-in GPS will collect speed and distance, and even show location with its built-in mapping feature. 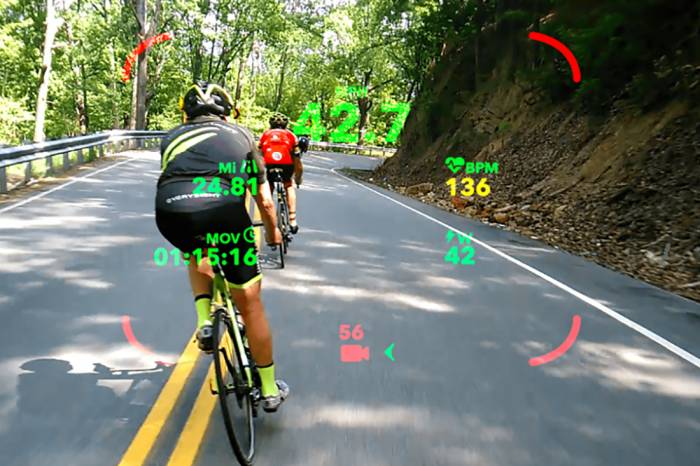 Of course, the Raptor isn’t fully independent of personal devices, but it can pair with them. While it can’t connect to cellular networks by itself, it can receive and display calls, emails, and texts via Bluetooth if you have your phone with you.

As for fitness, the Raptor paired seamlessly to my HR strap and my Pioneer and Quarq power meters on multiple bikes.

The Raptor can even overlay the location of stars across the sky to create an augmented astronomical reality. Everysight aimed high: All the features you could think of are included.

I found the HUD to be particularly valuable while riding in a group, as it can be treacherous to take your eyes off the rider ahead. But it also proved helpful on singletrack, where even a brief look down can result in a missed rock, root, or turn.

And riding with others wearing Raptors inspires even more confidence, as it’s less likely they’ll be looking down when they need to be paying attention.

Raptor setup is a breeze with an easy-to-use app (Android or iOS). And the software proved more polished than I expected from a startup brand. That’s especially good news for the GearJunkie crew, which has regular office meltdowns a few times a year when one of us can’t get our Garmin to pair, update, or sync to Garmin Connect.

To experience what it’s like to ride with the Raptors on, I highly recommend checking out the brand’s interactive demo. Having tried the real thing, I found this demo impressively realistic!

Plus, the glasses carry an eight-hour battery life. Everysight claims its tests showed riders had a 120-mile range with the glasses — more than enough for most road rides.

The Raptor team will soon release a development kit that allows third-party apps to be developed, and I’m excited to see what the Raptors can do when paired with other tech.

OK, time for the downsides. Raptors are not very comfortable. They’re not adjustable and didn’t fit a fellow big-headed tester well, resulting in a headache after about two hours of use.

Also, they are not particularly good-looking either. The amount of tech onboard is impressive, and it’s crammed into a reasonable size. But it’s still pretty obvious you’re a cycling cyborg when you roll up at the coffee shop. To be fair, they could look worse, but my wife and I were underwhelmed. 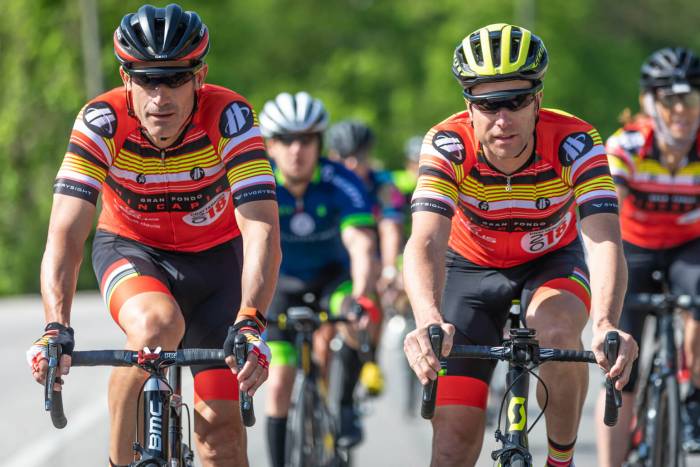 But the design is not all bad. The bulky size doesn’t look nearly as out of place when worn with a helmet. I also appreciated the availability and usability of the Raptor’s different lenses in different conditions.

In the end, I was satisfied with the Raptors. They do it all right out of the box. It’s an incredible experience to have all of that data in an augmented reality environment, without massive inconvenience or cost. I was definitely impressed!

But are they a solution to a problem that doesn’t exist? For me, yes. But that’s an indictment on the concept as a whole and not of this product. I love my Wahoo Bolt. It’s easy to use, lightweight, affordable, and lasts basically forever. And at $650, the Raptors land at the high end of the cycling stat device market.

So for now, the old-fashioned computer remains my go-to when I need data on rides. But that’s a personal preference. If you’re interested in augmenting your cycling reality, the Raptors will allow you to have all of your cycling data right in front of your eyes.