Fat tires and a powerful electric-assist motor make this bike one of a kind. 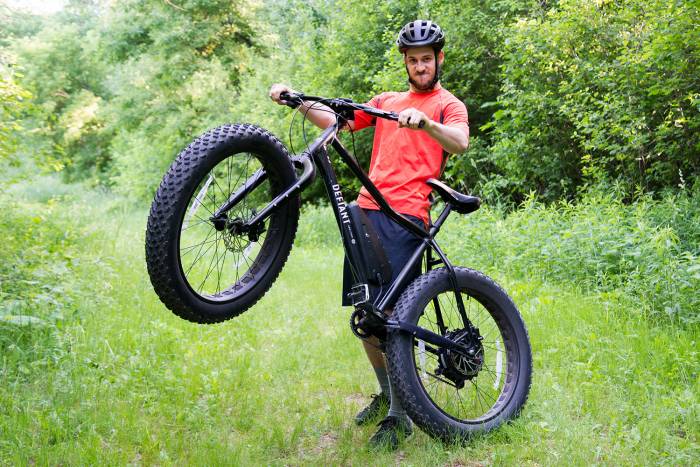 “I am a cheater!! It’s electric, I’m a fake!” These words race through my head. I want to shout. But I’m smiling the whole time.

Defiant Bicycles is based in Minnesota, a state where fat bikes were arguably born (if not massively popularized). Defiant takes the genre to a powerful new place by adding a motor.

The pedal-assist bike is a beast. It weighs about 50 pounds and costs a healthy $3,300. The company employs a 500-watt motor and five modes of assistance to pedal through almost anything.

You can ride 20 mph with ease. Cranking it to the max, I felt giddy. Read on for my first impression review. 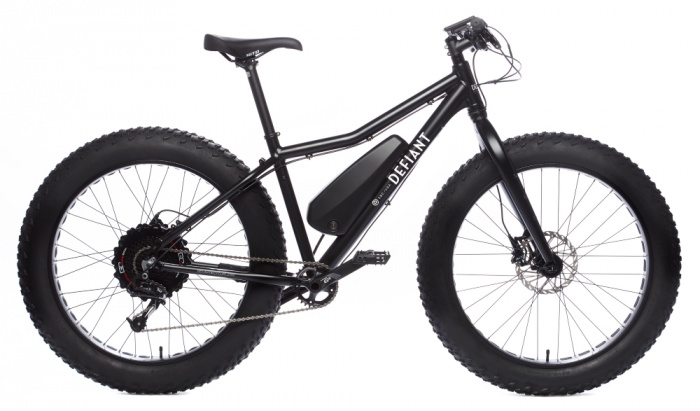 I pedaled from 0 to 20 mph, posture relaxed and upright, all without breaking a sweat. Meanwhile, I zoomed past nearly every cyclist within eyeshot on the trail. It felt a little evil.

There is no throttle. The Defiant e-fat bike operates with a pedal-assist motor. The motor powers the rear wheel, in addition to your pedaling.

A slick dashboard display reveals your speed, power outage (in watts), and battery life. A large battery locked onto the frame connects with cables to the motor on the rear wheel.

In its highest setting, the battery lasts a couple rides, roughly 25 miles for us. On its lowest, the bike is still fast and runs for 50 to 60 miles. The display shows your real-time power outage in watts and alerts when the battery is getting low.

GearJunkie had the fat bike for a week and in that time we tested it commuting, on road rides, and on singletrack.

The first test was for commuting. An e-bike can replace a vehicle for many people. It’s easy to ride 10 miles or more on a bike like this, and you can arrive at work or school fresh and not sweaty.

Defiant markets this bike for commuting in some scenarios. Granted, it’s overkill for anyone in an urban environment — you don’t need fat tires or this kind of bike for the city grid. Defiant and other brands sell road-ready e-bikes.

How Specialized Changed My Opinion On E-Bikes

The Turbo Levo FSR mountain bike is kind of like a jet ski. Ya just can’t help but smile when you’re on it. Our contributor put it through the paces for this review. Read more…

But if you live in a northern place where snow is a part of the commute each year, then consider a fat bike. Many people in Minnesota commute daily through the winter on a fat bike.

One point on urban riding: Locking up the Defiant was a challenge. The wheels and frame are gigantic, and I wasn’t able to use my U-lock. (I opted for a folding lock from Abus.)

I would be inclined to commute with this bike if I had easy access to internal bike storage that didn’t require hauling it up or down stairs. It’s too heavy to carry and move around indoors. 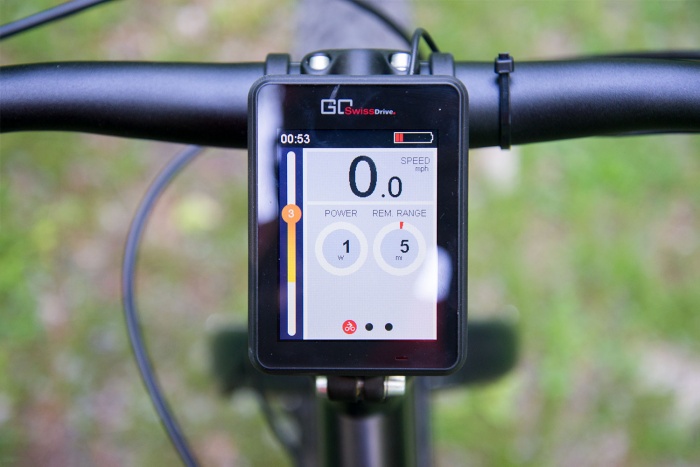 Fat bikes are able to ride on all surfaces, but they are slow, especially on pavement. With a motor, a fat bike is fun and fast. You hear the rubber on the road — the huge tires grip tarmac and make for fast and fun banking turns.

The bike was quick to hit its 20 mph limit. Defiant adds a governor on the system, so 20 mph is the motor’s max. Otherwise, the bike would change classification and require different licensure.

That said, at 20 mph the bike wants to go faster. Specifically, the gear ratio shifted to its highest gear resulted in a very high cadence. It’s kind of similar to setting your bike to its lowest gear and frantically mashing the pedals only to move at a snail’s pace. Because of this, I wasn’t able to ride at top speed with optimal pedaling.

I tested the e-fat bike on some singletrack near downtown Minneapolis. Put simply, I passed everyone, cooked it on the downhills, and averaged 10 miles per hour on the uphills. I did three laps in the time it takes to do one.

The bike’s weight, at 50 pounds, is difficult to manage on tight terrain. As much power as the back wheel has, its weight is cumbersome on hills, berms, and especially tight technical turns.

Singletrack is designed for standard mountain bikes. The turns, jumps, and features are all expected to be taken at specific speeds. With the e-fat bike, I went much faster, and it resulted in a lot more speeding up and slowing down. Which isn’t the worst thing, it just didn’t feel like the best use of the bike.

All that said, the bike was a blast. It puts you in full hero mode while rolling singletrack. And despite the motor, you can get a workout on the bike, though just at a faster pace.

Founder Kevin Spreng explained to us there’s really no way to describe the sensation of pedal assist. I had yet to ride one, and with an open mind, pedaled away, happy as a clam.

I’d recommend the Defiant e-fat bike to those looking to spice up their commute and have some fun, without necessarily breaking a sweat, on trails.

And for those in snowy climes, the extra power is sure to make commutes and singletrack euphoric.

With singletrack, one audience is anyone with compromised physical ability. The “assist” on the bike will enable anyone with bad knees or other issues to keep up with younger and healthier riders.

For those curious, try one out. Demo an e-fat bike at your local bike shop and see what all the rage is about. Just don’t be surprised when you can’t control the big, ear-to-ear smile sure to happen.