Is this the ‘best’ mountain bike on the market? Our editor opines on the state of MTB via the lens of the latest iteration of Santa Cruz Bicycles’ Bronson mountain bike. 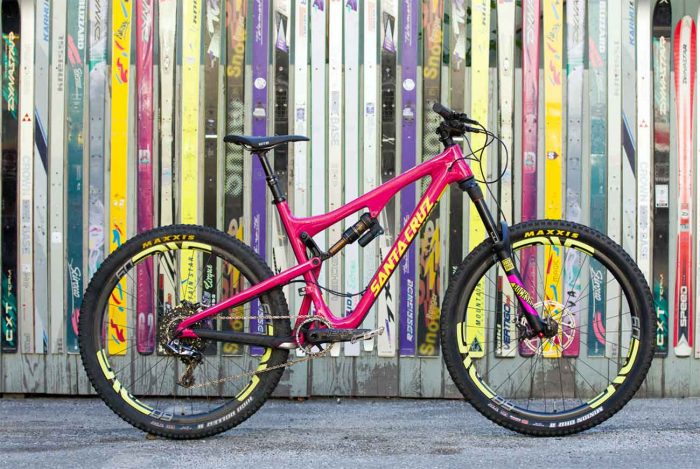 Mountain biking, as a term, has become highly-segmented. But if your personal definition includes riding rugged, rocky trails, both pedaling up mountains and shredding back down, then this bike, the Bronson, is surely a contender for the “best mountain bike.”

The original Bronson was released three seasons ago to much accolade. The updated Bronson is long, lean, and likeable, with improvements in standover clearance, suspension tuning, and general trail manners. Shorter seat tubes, up to half-an-inch on the new model, afford excellent standover clearance, and the stable wheelbase shines in the confines it’s designed for — classic, variable singletrack mountain-biking trails.

I’ve been riding it since last October for this review. Rolling on 27.5-inch wheels, the Bronson fits firmly into the “enduro” category if you want to slot it somewhere. That means “all mountain” in traditional siloing, as this machine is neither sleek XC-racer nor burly downhill weapon, but it can comfortably, and competently, handle both extremes.

I tested it all over the place. As I ricocheted off the fist-size chunks of tire-slashing shale on one double-black trail, I was thankful for the 150mm of suspension travel, which saved my onions on more than one rock-strewn way.

In what has become de rigueur on many modern trail bikes, our size large Bronson featured 800mm wide carbon bars combined with a short 50mm stem. This kept handling in the sweet spot when railing through the chunder. However, when things got tight in the trees it did require some deft maneuvering — bashing bloody knuckles on tree bark is a painful reminder to wear full-finger gloves.

People tend to gush over full-suspension bikes for their descending capabilities. But I think they are equally beneficial for climbing. When the trail snaked upward, and I had to navigate gnarly rock gardens, the Bronson’s longish top tube, coupled with short chainstays, gave it surprisingly good manners.

Seated climbing with a smooth power transfer gives the rear wheel incredible traction. Even though the Fox Float X Factory EVOL rear shock offers its vaunted “C-T-D” — Climb, Trail, or Descend settings for maximum efficiency — I rarely switched it out of the “descend” mode.

But let’s not prevaricate around the bush. When the trail does begin its descent down the fall-line, loamy sections of dirt around each corner just begging for you to make those classic braaaap! noises, the RockShox Reverb dropper post gets the saddle out of the way and the Bronson makes you feel like you’re wearing velcro-soled shoes in a room full of shag carpet.

A bike of this caliber can easily make you a better rider, instilling confidence when the going gets rowdy, but also keeping you fresh for long days on the trail.

It’s tempting to think Santa Cruz named this bike after 70’s action star Charles Bronson. But, in reality, it’s a nod to the brand’s original physical street address in Santa Cruz, Calif. And, in my estimation, I’d say its prowess is a little more Steve McQueen, anyway.

But if you’re in the market for a new mountain bike, you’d have a deathwish to not consider the Bronson (see what I did there?). With varying build kits, and two versions of its carbon frame, the Bronson can range in price from $3,599 all the way up to a nose-bleedingly expensive $8,699. As tested, with a SRAM XO-1 group, our bike was set at $6,599.