The SB100, from enduro-focused brand Yeti Cycles, isn’t the lightest short-travel mountain bike on the market. But it might be the most capable and versatile. 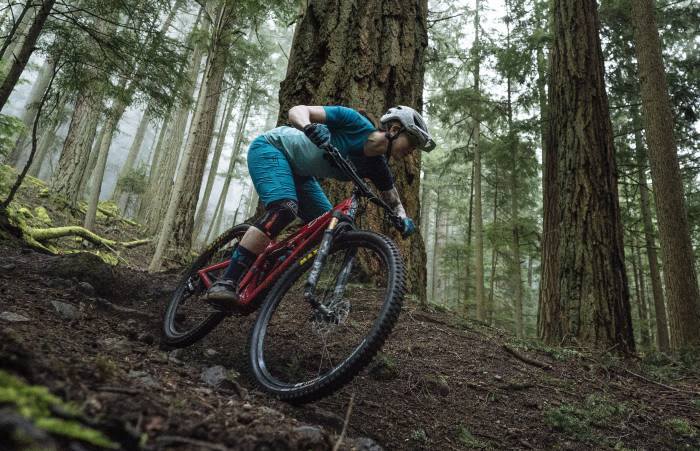 Yeti Cycles rolls out the SB100, its new full-suspension cross-country 29er with 100 mm of rear travel and 120 mm of front travel. I had the opportunity to test it over four days on loose, dry, sometimes sandy dirt in Los Barilles, Mexico. Cactus-rimmed trails punched up and down steep slopes, skidded through hairpin switchbacks, and whooshed through tight ravines. 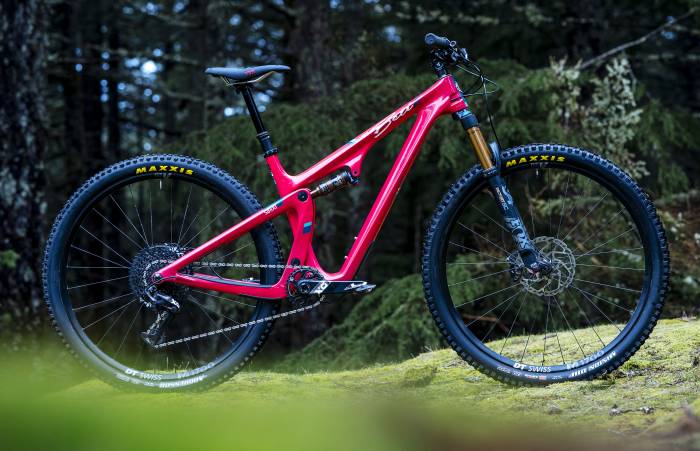 Its low-slung frame has significantly more standover than other Yeti models. This makes it great not only for smaller riders, but also for riders who want to run a longer dropper post so the bike is out of the way on technical descents. It’s the bike I’d choose for the BC Bike Race, or any other marathon trail event or epic ride.

Yeti built the SB100 to be the most capable 100-mm bike on the market, and to ride like other Yetis. This means being able to handle technical and challenging terrain on the downhill.

And this 29er climbs better than any other Yeti I’ve ridden. It’s maneuverable and nimble in even the sharpest corners, both uphill and down. The SB100 has a super-efficient pedaling platform, but on the downhill you can rally.

The Yeti SB100 utilizes Switch Infinity, pairing a 100-mm Fox rear shock with a patented auxiliary suspension unit. This technology provides a stable pedaling platform on climbs and a bottomless feel on descents.

In this bike, Yeti changed the leverage ratio and the slope of suspension curve so that it feels even more supple on the front end than bikes designed for more aggressive descending. But as you get deeper into the bike’s travel, the middle of the suspension curve feels stable. 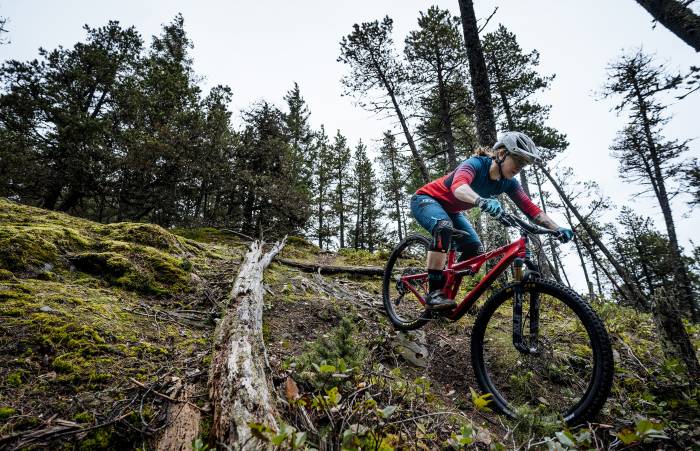 At the same time, the suspension tune lets you use all the travel you have. And it does it without compromising pedaling efficiency, or giving the rider the feeling that the suspension is better in the beginning or end of its travel. Using Switch Infinity, Yeti artfully controls both.

With the SB100, Yeti moved the Switch Infinity behind the seat tube and made its components smaller and lighter. The brand also added a splash cover to the mechanism to protect it from being blasted with dirt, mud, and water.

Yeti maintained its signature feel with the SB100. But it changed the tube geometry to give the bike exceptional standover height, which is good for smaller riders like me. And thanks to the uninterrupted seat tube, any rider can run a dropper post with more travel than on other Yeti frames.

The stiff, compact frame has a 68-degree head angle, a 74.5-degree seat angle, and the same 17.2-cm chainstays Yeti uses on some of its other bikes. The short offset fork tracks better cornering and rides more nimbly in switchbacks, both climbing and descending. A longer reach paired with a 50-mm stem gave great front-end grip in loose dirt on descents. 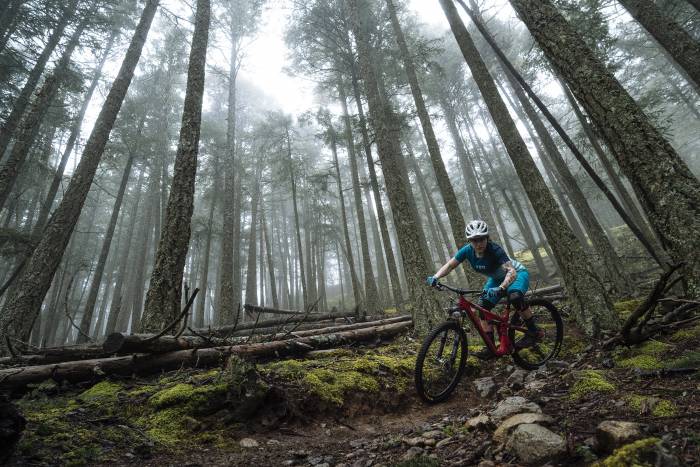 Sometimes, manufacturers spec a bike to keep it light instead of including parts riders want. For example, brands sometimes use light, low-tread tires that don’t match the bike’s personality. After purchase, the rider then has to drop $150 or more on new tires.

Not so with the SB100. It comes with real rubber: a Maxxis Minion DHF 2.3 in front and a Maxxis Aggressor 2.3 in the back. The tires gripped and cornered well in Mexico. I’m looking forward to riding it in Vermont as soon as the trails dry out.

And the SB100 has a 760-mm-wide handlebar to help you maintain an aggressive body position descending.

The biggest gripe riders have had with Yeti Cycles is that none of their bikes hold a water bottle cage inside the main triangle. To remedy this, all sizes of the SB100 frame accommodate a water bottle in that location.

In other frames, there are mounts on the bottom of the downtube, where the spout of your water bottle is sure to get crusted with mud, dirt, and cow poo. If you’re going light and fast and don’t want to wear a pack, you’re stuck with being really thirsty or chancing giardiasis.

Mechanics will thank you for riding the Yeti SB100 because it’s designed to be easy to repair. The Switch Infinity still essentially requires zero maintenance, which saves a little grease.

There’s no more fishing around inside the tubes for dropper or derailleur cables. The brand uses a tube-in-tube system, which aids in feeding a derailleur or dropper cable from its source to its terminus.

The Yeti SB100 comes with the Fox Transfer dropper, my personal favorite. A serious brand upgrade, Ergon GE1 handlebar grips come standard on all SB100 builds. And the brakes will stop you, even in steep downhills; the rear brake uses a 180-mm rotor.

In addition, Yeti finally made it easier to upgrade to carbon wheels through its website or an outside dealer. The brand previously offered the Enve wheelset, which cost $2,400. Depending on which model you buy, Yeti now offers a DT Swiss XRC 1200 25-mm carbon wheel upgrade for $900–1,200. 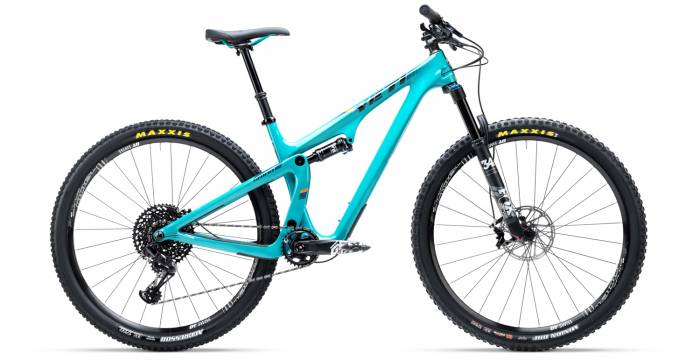 Yeti Cycles SB100 Beti: Women Get Their Own

Yeti Cycles makes the best bikes for aggressive female riders because it doesn’t dumb down the geometry, construction, or specs.

Yeti Betis, including the Yeti Beti SB100, have a shock tune for lighter riders, a women’s saddle, and shorter cranks. Hopefully, Yeti will soon offer a lighter shock tune for men too.

Based in Golden, Colo., Yeti Cycles continues to grow by 30 percent each year. Its bikes consistently make riders feel capable and have fun.

“We’re too dumb to know what the market wants, so we built what we want to ride,” said Yeti co-owner Chris Conroy. I think Yeti knows exactly what its riders want, and, once again, the brand has nailed it.

Like the rest of Yeti’s fleet, the SB100 inspires confidence with its stability and maneuverability. Like other Yetis I’ve ridden, it helped me reach my potential on trail.

The bike is relatively heavy for a 29er XC. So if you’re counting grams, get a different bike. Personally, however, I can’t wait for more time on this bad boy. The SB100 is available for purchase now on YetiCycles.com.

Up Next: Fresh Edit: Danny MacAskill Shows Off in Switzerland