The first full-suspension gravel bike takes the shoulder pain and ass agony out of washboard, potholes, and bad pavement.

After testing it for myself, I can assure you the brand succeeded. I rode this bike for a month. I spent the first 2 weeks pushing its limits on broken pavement, dirt roads, and undulating singletrack through Vermont and Colorado. During the other 2 weeks, I fully committed to this first-of-its-kind build, traversing the country of Jordan from tip to tail on every surface imaginable.

In short: I’d buy the Niner Magic Carpet Ride bike for touring or just horsing around. It has the relaxed, comfortable geometry of other drop-bar gravel bikes, not the overly slack geometry of a mountain bike.

Those who argue there’s no need for full suspension in gravel, or who say that 29er mountain bikes fill that gap, are missing the subtleties of what this bike brings to the table. It provides efficiency both uphill and downhill. Its geometry is made for pedaling. And the suspension works best for a rider who is sitting, not hanging their butt over the back tire. 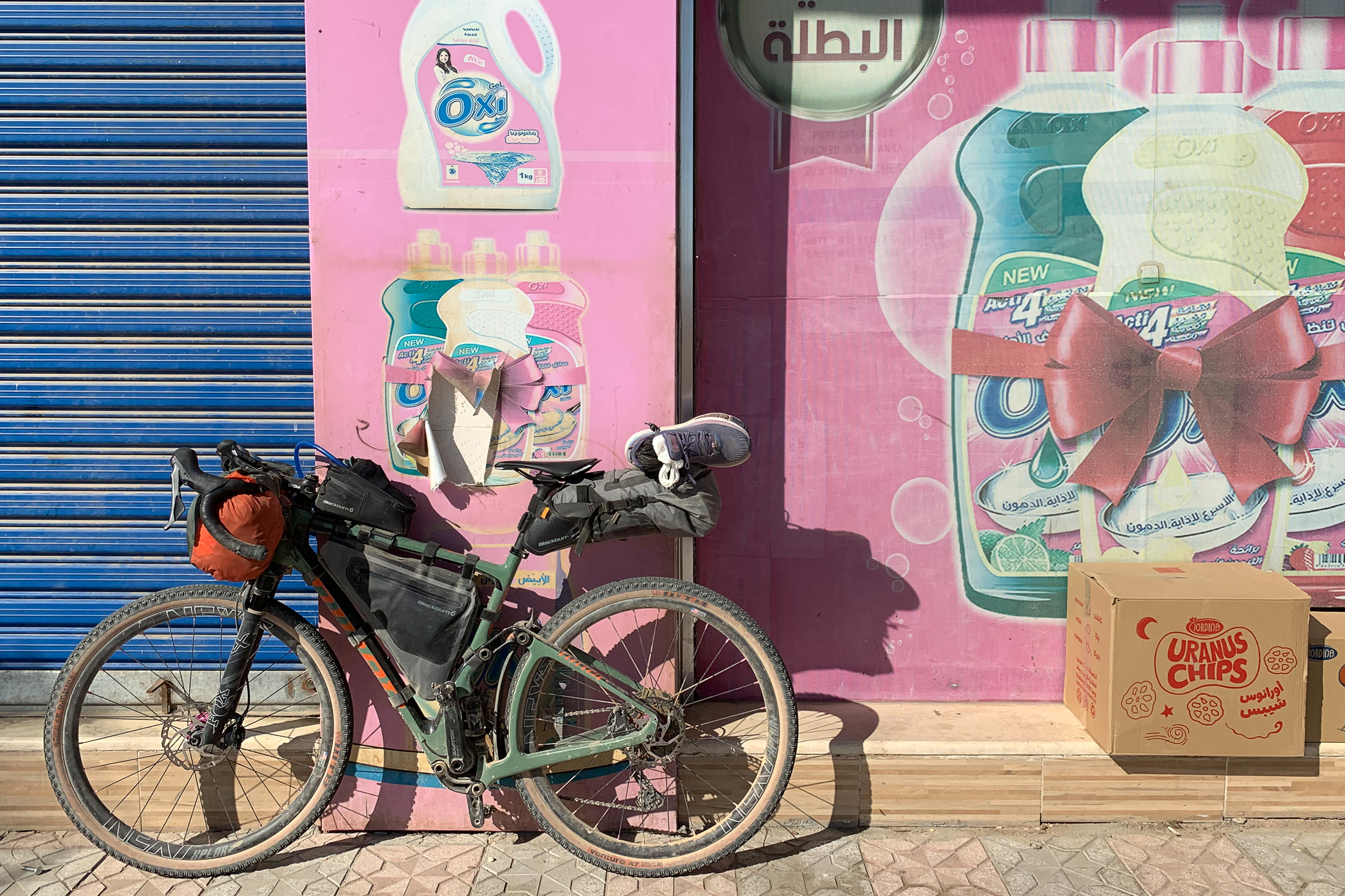 When you’re loaded down for touring and don’t know what’s around the next corner, the MCR is the bike you want to be on. In Jordan, I rode blacktop so new and smooth it was still steaming.

I also rode sandy trail littered with baby-head rocks and gravel so rough that without suspension, it would have launched me out of the saddle. The grades both up and down were up to 24% and hit 20% more frequently than I like to remember.

But the Niner handled it all — sometimes passably, sometimes brilliantly. I can’t think of another bike that would have done as well across all conditions.

Beefy, mountain-ready 50c tires alone can’t absorb everything. And when you load a bike with 2 weeks of gear, it makes any bike handle differently. But Niner designed this frame to bear those extra shocks and carry that extra weight, though it remains nimble and responsive without it.

Put simply, Niner set this bike up for an adventure. An integrated rear fender protects the rear shock components and keeps rain and mud off your butt. Full-sleeve internal cable guides kept out sand and dust, so shifting and braking remained smooth. There’s also a port for a dropper post if you decide to add one.

For carriage, 11 fixed mounting points hold frame bags, bottles, and more. And there is basically clearance for whatever rim and tire combo you want to ride, up to 700 x 50c and 650b x 2.0.

With the suspension open or closed, the MCR’s carbon fiber mainframe and rear triangle, which have forged, one-piece linkages, felt both comfortable and quick-handling. Using rigid internal and external molds to hold the carbon during the curing process, Niner achieved tight construction tolerance with more refined ride tuning, strength, durability, and weight reduction.

Those molds yield a more consistent compaction of the carbon layers, better control of wall thickness, and reduced chance of resin pooling in the finished product, which could have deadened the ride feel. 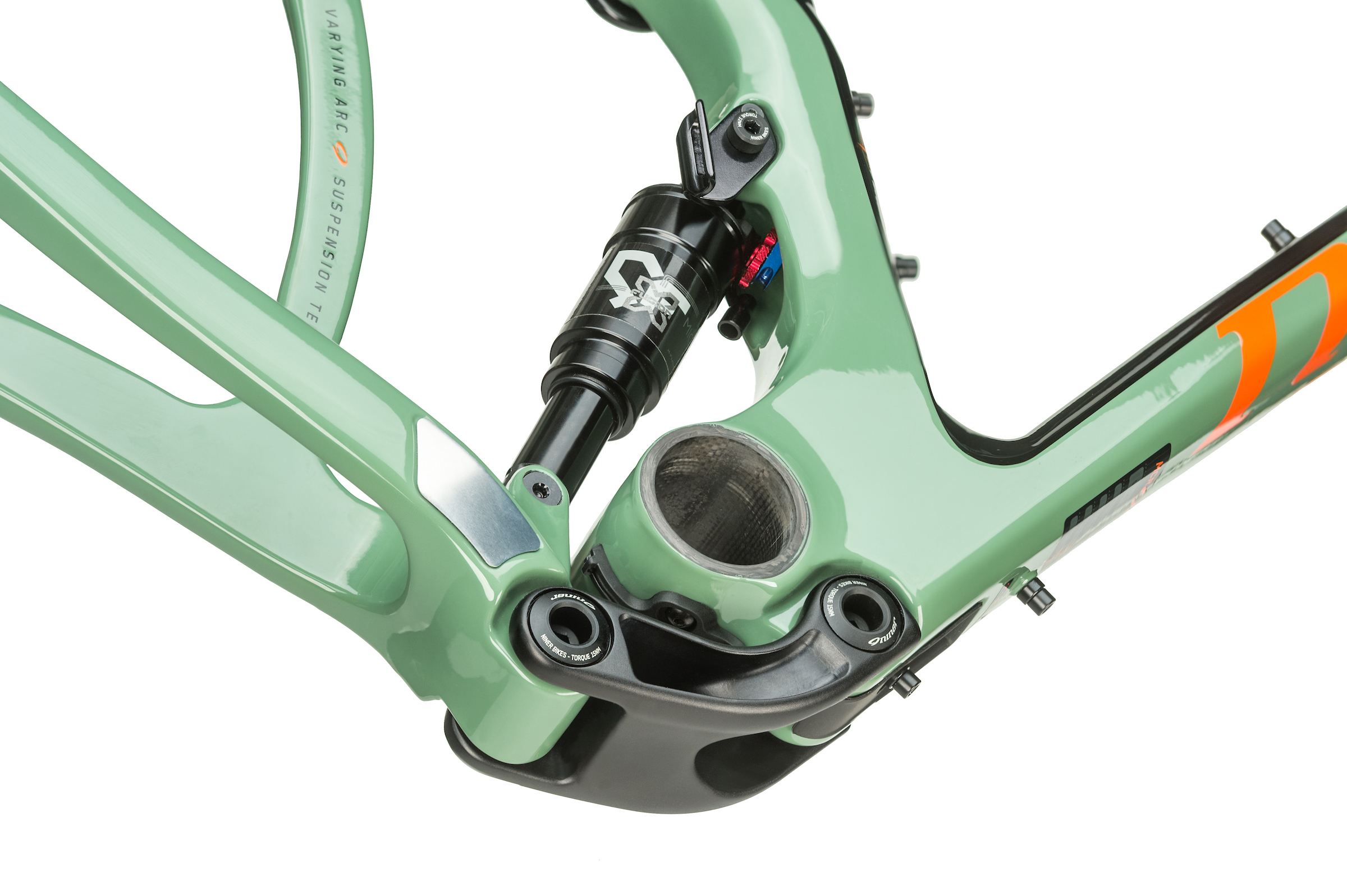 “People have been scared to go too far with skinny tire suspension because of weight,” said George Parry, the brain behind the MCR’s design. Niner’s engineering and production manager, Parry brought his knowledge as a former mountain bike racer and supercross enthusiast.

His goal was to create an in-between solution for people who don’t care about being the fastest per se, but who want to go have fun and do it as comfortably as possible. To achieve that, Niner’s biggest challenge was finding a tunable 50mm stroke shock.

“After investigating available damping systems, like the type used in industrial machines or for motorcycle steering, it was clear we’d have to develop and manufacture our own,” Parry told me.

“Knowing this would significantly increase our time to market, we decided it would be better to use an existing bicycle shock, not a spring.”

So after Fox and RockShox said no, X-Fusion stepped up to the plate — despite both the relatively small quantities Niner wanted and general skepticism that full-suspension gravel could just be a flash in the pan.

Parry incorporated the X-Fusion shock into Niner’s signature Constantly Varying Arc (CVA) suspension platform. CVA is the path the rear axle follows as the suspension moves through its travel. When it’s compressed, the rear axle moves past the sag point in a gradual, constantly varying arc, upward and inward toward the bike.

Tunable air-sprung shocks manage a wide weight range, while oil damping controls compression coming from the rider and gear, dissipating rebound when the suspension recovers. By suspending the bike and rider, the rider gets the most cush ride possible.

“We tucked the shock behind the seat tube and ended up with a really functional system,” Parry said. “We wanted to keep the road bike look and the ability to put frame bags on.”

The result was a success! In Jordan, I ran a frame bag that claimed all the real estate in my front triangle without interfering with the shock.

Comfort is one reason to have full suspension. The other is that the more your tires are in contact with the ground, the better control you have. Suspension takes the jarring bounces out of rides. And for any gravel rider who will tackle more technical terrain, having full suspension will keep the rubber on the road more of the time.

The MRC’s suspension is good, but we expect to see improvements in the coming years as mainstream shock manufacturers like Fox and RockShox jump on board. Both of those companies make suspension with more sophisticated damping circuits and a more finely tuned rebound. In the current MCR, small clicks make big changes.

Despite the lack of refinement, this bike does the job. When I didn’t want full squish in the back, I hit the bar-mounted shock lockout lever, and the read rode rigid. Although the suspension wasn’t nearly as refined as on a high-end mountain bike, I was satisfied with the ride, especially while the bike was loaded for touring — on skinny tires. My expectations were low, and I was pleasantly surprised.

I’m pretty sure this is the beginning of a trend. Last year, Cannondale introduced the Topstone, which uses flexing rear stays to absorb road vibration, bumps, and other irregularities. It’s a technology the company introduced in mountain bikes years ago. Meanwhile, Specialized specs a hidden head shock in its gravel bikes. But Niner was the first to tackle front and rear.

“This isn’t a full-suspension mountain bike,” Parry said. “It’s a big step forward from a rigid gravel bike that brings both comfort and ability to the table.”

As Niner gets more riders on this bike, it will refine its suspension pressure charts and hone in on the curve, making it even better than it is. Hopefully, it will also design alternate mounts for the rear shock lockout. With the ultralight handlebar bag I prefer, which wraps and clips around the bar, I couldn’t reach the rear suspension lever. So I awkwardly angled the lever to make it work.

Up Next: The Other Side of Revelstoke: Boulders, Berms, and Bikes

Saving…
The Other Side of Revelstoke: Boulders, Berms, and Bikes
Sending Scree: Saddle Up for a ‘Freeride’ With a Red Bull Rampage Legend
×