Overbuilt, grit-hungry road bikes capable of steamrolling tarmac and conquering trails are flooding the marketplace. Our test drive of Open Cycles’ Unbeaten Path proves it to be near the top of the pack. 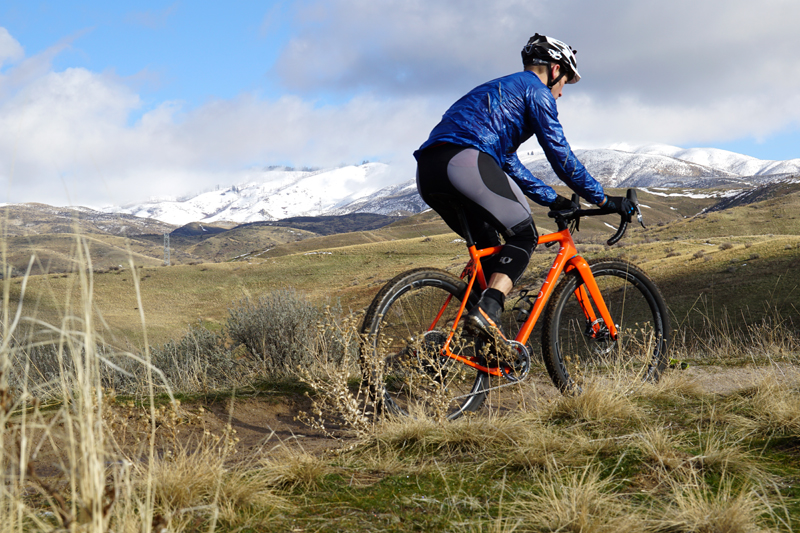 Seems most everyone with a bike brand is pitching some variety of the gravel bike these days. Just as you thought the ‘cross games have reached critical mass, the industry has oozed into new off-road territory with a breed of plus-size, adventure ready mountain-“ish” gravel bikes.

This fall, we got our hands on a deliciously plump, orange-cream bike by Open Cycles. Never heard of them? Well, you’ve likely heard of the founders’ other projects: Gerard Vroomen cofounded Cervélo Cycles and Andy Kessler was the CEO of Swiss juggernaut BMC bikes.

Fastidious perfectionists, the pair’s Unbeaten Path (U.P.) bike is the second steed in Open Cycles’ stable in four years. (Open’s first bike was a lithe hardtail frame that barely tipped the scales at 900 grams; that’s lighter than most road frames, people! It earned a title of the lightest 29er on the market.)

The new U.P. is a transformer of adventure bikes. Clever engineering has managed to preserve its racy road geometry while affording plush mountain bike tire clearance.

The company calls the U.P. a performance-oriented “gravel-plus” cross/road bike with clearance for mountain bike tires “so you can ride anywhere, and ride fast.”

We put the U.P. frame paired with 650b (27.5″) mountain bike tires to the test on Boise, Idaho, area roads and foothill trails, where we tackled both gravel and the beyond. Unbeaten Path or boulevard of broken dreams… read on to hear our take.

The priciest real estate on a bike crowds around the bottom bracket, where the chainring, crank, chainstay, and tire all fight for precious space.

Mountain bikes buy extra room for the knobbies by pushing the chainstay (and hence the chainring and cranks) out laterally, yielding more clearance. But this wider space doesn’t accommodate the narrower cranks and gearing found on cyclocross and road bikes. 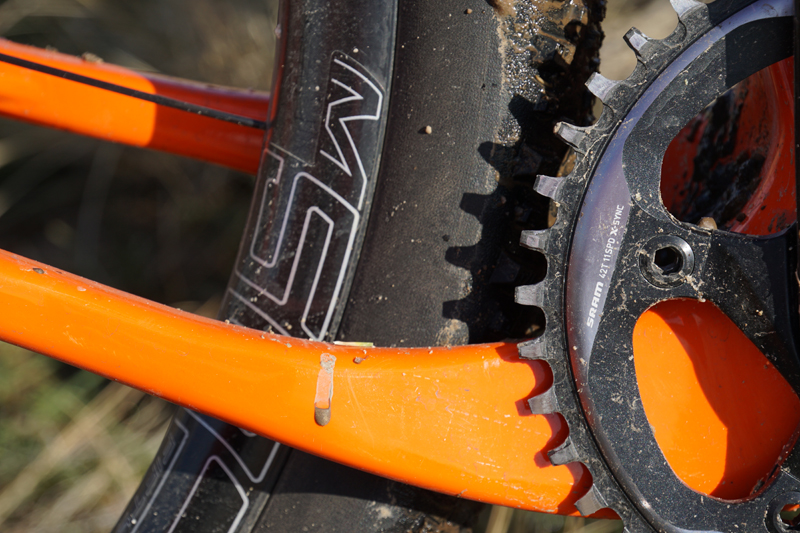 By dropping the drive-side chainstay, Open picked the space gridlock, clearing nearly twice the space of the typical road bike while keeping the wheelbase short and sprightly.

And because the radius of a 700c road slick, 40mm cyclocross tires, and 650b mountain bike tires are nearly identical, the U.P. pulls a true hat trick, capable of running all three wheelsets on one frame without compromising the bike’s handling.

Once you wrap that 29 rim in a 2.1″ tire, you start to choke out that narrow chainstay space and risk tire rub. And extending the wheelbase to accommodate the added girth would compromise the bike’s handling.

Keeping the overall radius at or below 650b keeps a relatively compact wheelbase, applying more power on the rear wheel and ensuring a responsive ride.

First blush and it’s impossible to miss how clean the bike looks. All cables quickly duck into housing and route internally to the brakes and drivetrain, allowing the clean frame to effortlessly shoulder up cyclocross race course runups.

And should you want to strap on some frame bags, the cables are tucked out of the way and free from straps and errant snags in the wild. 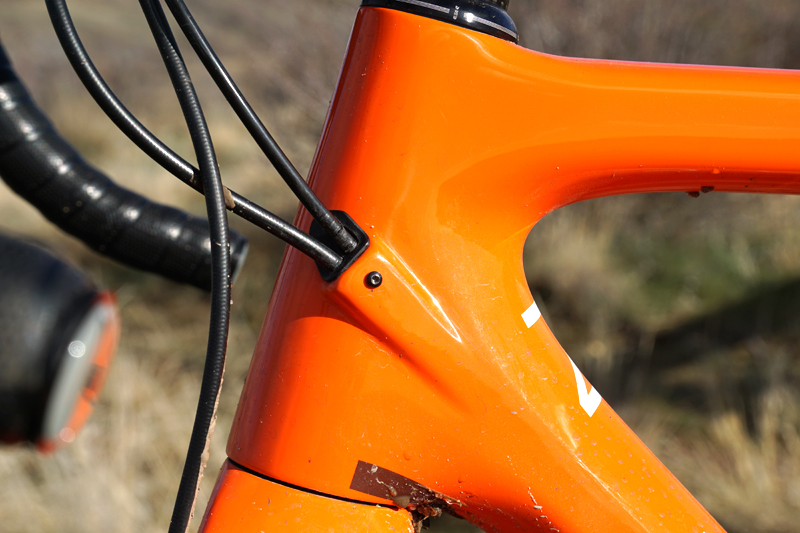 Of course, the naked veneer makes for a helluva good looking frame and a real head turner when cranking watts on the road.

The frames are offered in small, medium, large and x-large in orange and chocolate brown, and they cost a cool $2900, a fair amount of coin for just a frame and fork.

But the price is not outrageous when considering that this one frame can pair with so many uses with the simple swap of a wheelset. Inevitably this implies the ideal owner will pony up for several wheels to match the terrain. 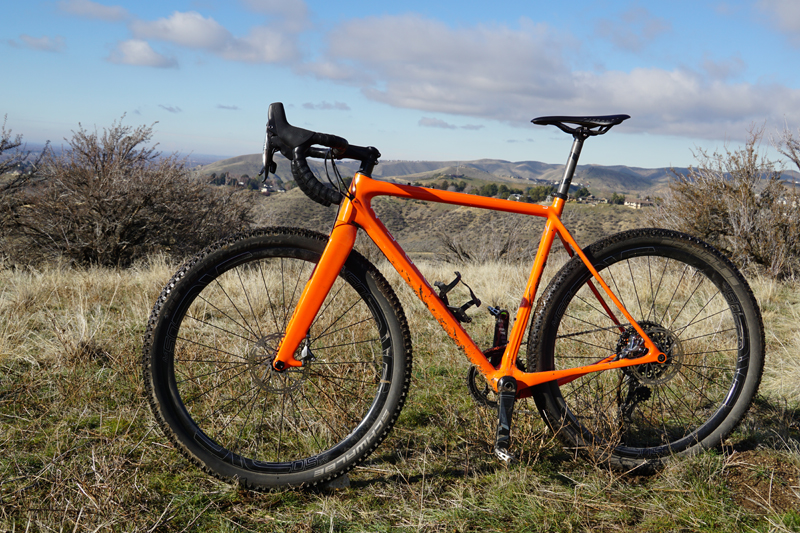 Full builds can be tested and purchased through a small network of partnering retailers. Depending on the specs, an aluminum component bike with SRAM Rival drivetrain will run you just over $5000.

Reach for the top shelf and upgrade to Ultegra Di2 … pair the frame with full carbon Enve cockpit and wheelset … and you are looking at a $12,000 bike.

How was the ride? 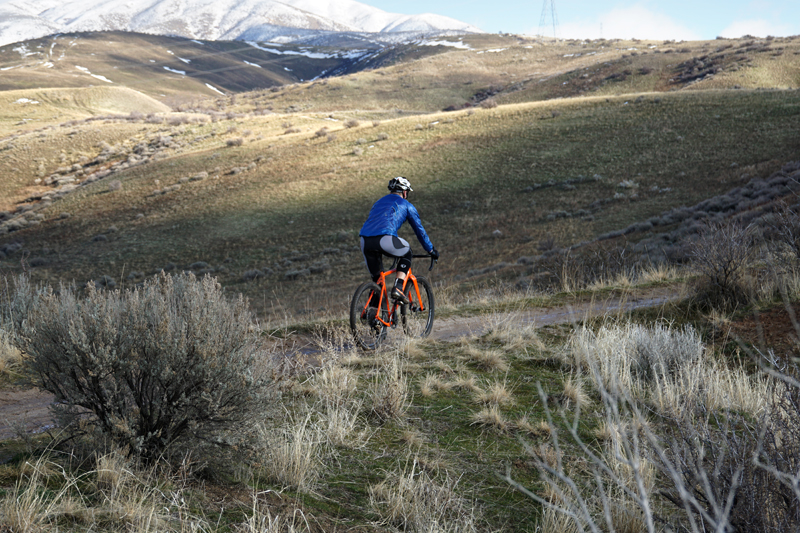 The bike we tested was shipped with 650b tires on ENVE rims, powered by SRAM’s Force1 (x11) drivetrain, and weighed a stitch above 17 pounds … perfect for our Boise foothills, which transition from gradual gravel roads to boney singletrack.

Swinging a leg over the saddle, I immediately noticed how fast the bike was off the line. As expected, the carbon was stiff and responsive, applying force directly from pedal to pavement. The bike rocketed around town and to the trailhead much more aggressively than a mountain bike.

Once on the gravel, the bike flowed into its comfort zone. With less aggressive 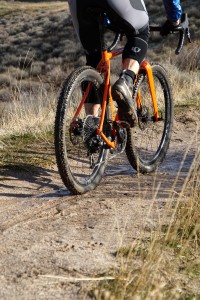 geometry than a true cyclocross bike, it churned through the miles in comfort and inspired “one more detour before we go home” type riding.

Boise singletrack varies from smooth to semi-technical. We tested the U.P. on our more pedestrian trails and found it had superior traction compared to a typical ‘cross bike, where it ate up the elevation gain as fast or faster than a traditional mountain bike.

But the geometry began to falter when tackling steep, loose sand and technical rock. Even while running 650b, without a wide flat bar, the margin for control was slim. And without suspension, the ride down washboard roads rattled the rider pretty good. 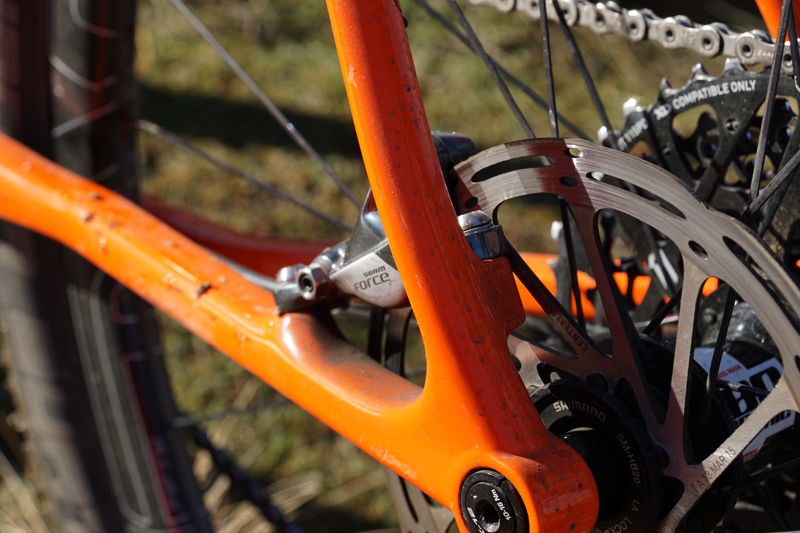 Straight up, there are other, less expensive bikes that can pivot from narrow to wider tires. The U.P. is designed for those who want that extra footprint that 650b provides. With its shapely figure, the 17 pound U.P., running 650b, carries its weight very well and provided gobs of traction.

Make no mistake—it won’t replace your mountain bike. But with the ability to run a single bike in a gamut of setups with the simple swap of a wheel, the U.P. has unrivaled versatility in the current gravel marketplace.

And as I sell off my current road and cyclocross bikes, it may just Open UP more room in my garage, too.

Up Next: 24 LEDs: Taillight Aims For Ultimate Bike Visibility