Designed by a quadriplegic, a new kind of rugged recumbent can roll over almost any kind of terrain and keep up with a two-wheel mountain biking pack.

For those with physical challenges, the bicycle can be a tricky vehicle. Enter the Outrider, an electric-assist trike designed to open the world of adventure to persons with disabilities.

Our contributor put the company’s Horizon model to a test in the Rocky Mountains.

The Outrider Horizon is a new kind of electric vehicle. Designed by Christopher J. Wenner, an adventurer who was paralyzed in an accident at the age of 17, the bike raised $126,000 when it launched on Kickstarter in 2014. 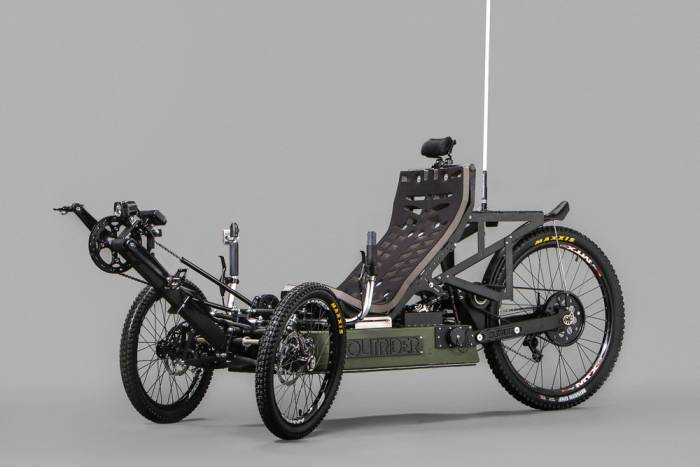 Today, the brand makes the trikes for adventurous folks who need or want a little help on the singletrack.

I wondered if the Horizon really could handle off-road terrain, so I nestled into one myself to find out. I pulled down my full-face helmet and sank into the seat along the base of the mountain at Copper Mountain, Colo. 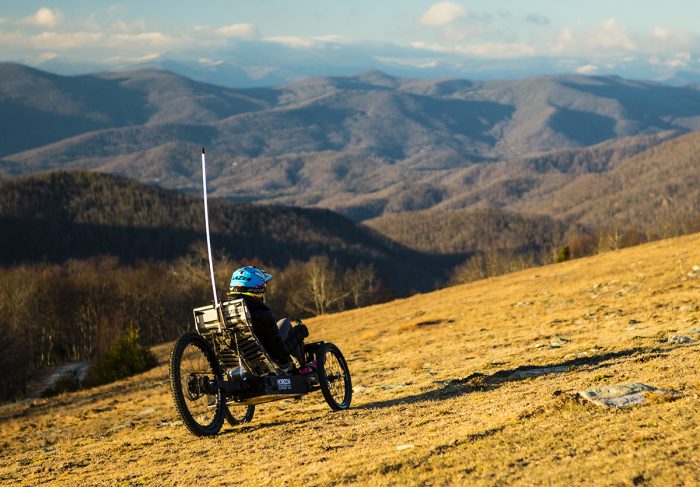 In front of me was a compact screen displaying speed. A hand lever to my left controlled acceleration while the hand control to my right had a brake lever and rearview mirror.

Eager to see what this thing could really do, I pushed the accelerator, jolted forward, and quickly stopped. This had more power than I expected. I started again, slowly, and drove smoothly across the stone-checkered base to reach the foot of the trails. Winding my way in and out of foot traffic and through narrow archways, I realized that the Horizon could handle sharp, abrupt turns.

My body leaned into each bend, reminding me of driving a go-kart. I dropped down a curb, somewhat hesitantly. The ledge was only a foot high, but it looked big. I didn’t know how the Horizon would take the drop.

The landing was cushy: full suspension provides four-inches of travel in the front and back. Check.

Pedal To The Metal

At the edge of the ski slopes, the ground was chock-full of bulky rocks and loose dirt. I pulled the toggle all the way and sped off on a wide, winding path. I couldn’t help but smile like a kid the entire time!

Sure, I wasn’t getting the exercise that sends blood pumping through my legs like I would on a mountain bike, but I was getting the full adrenaline rush, happiness, and in-the-moment focus that comes with mindfully controlling a high-speed vehicle across off-road terrain.

I abruptly pulled the brake. The Horizon came to a quick stop as the tread on the tires bit down on the loose dirt beneath me, but I didn’t fly forward.

I turned the wheel and pointed it straight up a steep slope. The angle of the seat allowed me to relax comfortably, like I was sitting in a roller coaster moving toward the drop. As I ascended, the driving power didn’t let up and I moved forward with ease.

Pointing the bike back downhill was even more exciting: Could the brakes fail? Would I fly out of my seat? No and no. The bike was just as solid on the descent.

Next, I steered the Horizon to singletrack. It’s a wide bike, but certainly capable.

The trail dropped off beside my tire. What if my wheel slid off the trail? Could I tumble over? Realistically, the tire’s tread, weight distribution, and overall physics make it unlikely for the bike to topple over. The highest risk scenario would be if the rider steered the bike perpendicular to a very steep slope. 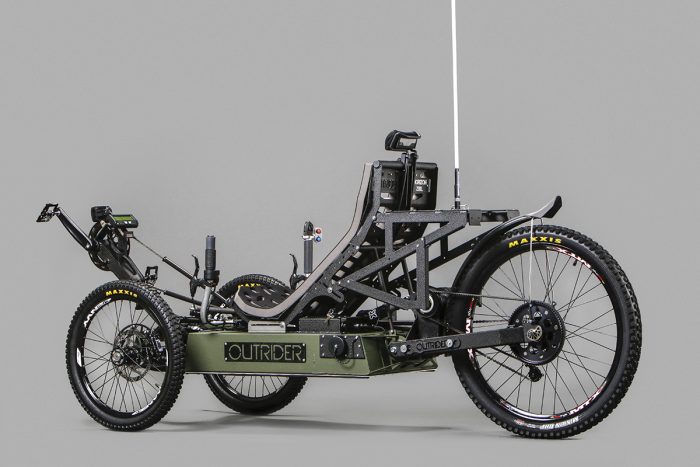 My palms started sweating as I descended the steepest slope I’d ridden yet. I took it slow and at a slight angle.

At the bottom, I crossed a ditch that suddenly jutted straight up before regaining flat ground next to a paved road. I thought I might get stuck, but the Horizon rolled through the dip with a tap of acceleration. The tires didn’t even spin out. On the road, I pushed the turbo button. I expected a jolt, but the acceleration was smooth.

From The Cockpit, A Mountain Biker’s Perspective

As a mountain biker, I was skeptical of being so low to the ground and how the pedal-free system would feel (it also comes with assisted hand or foot pedals, more below). But the ride was thrilling, easy to control, and required little technique.

I realized that anyone, regardless of physical ability, could drive a Horizon down a paved road to a national park trailhead and ride through rugged singletrack or fire roads for multiple days (with a solar panel to charge the battery) without returning to civilization. It’s an across-the-U.S. backcountry excursion waiting to happen. 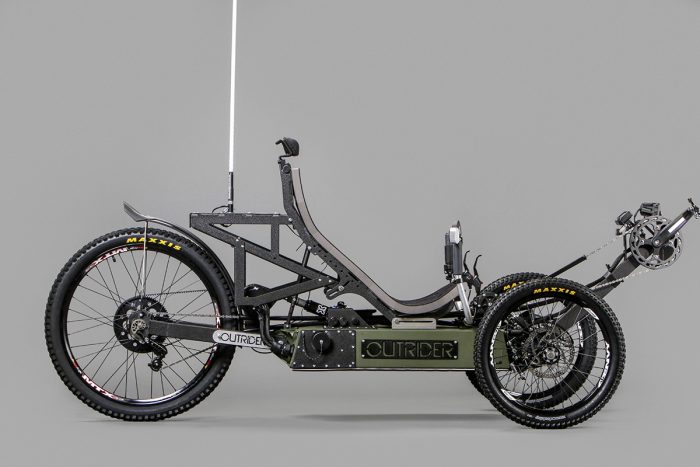 However you feel about electric bikes, it’s pretty hard to argue against the design as an adaptive mode of recreation for the differently abled.

The 105-pound all-terrain electric trike has a 6-inch clearance and can haul a 200-pound trailer. The Horizon will cover 60-180 miles before requiring a recharge, a process that takes just an hour. The motor’s peak output is 1,650 watts (the normal output is 750 watts), and reaches speeds of 20 mph with a 25 mph turbo boost button.

Each Outrider vehicle—the Horizon, Nomad, or Alpha—offers a choice of four configurations: Full electric, electric assisted leg pedal, hand cycle, or tri-pins. The tri-pins is an adaptive hand control that Wenner developed for people with little use of their arms such as those with MS, ALS (amyotrophic lateral sclerosis), or a partial quadriplegic.

In contrast to the Horizon, the Nomad is a crossover road and off-road vehicle (with variations like lower 4.5-inch clearance), and the Alpha is road specific.

‘Freedom At Its Best’

On the trail, the Horizon is an equalizer.

Mario Moran, a New Jersey-based Miami Heat Wheels basketball player in the National Wheelchair Basketball Association (NWSB), couldn’t agree more. He’s paralyzed from the waste down, and took the Horizon on “the rowdiest test run” that Thomas had ever seen, he said.

“It was the first time I have experienced any type of equipment like the Outrider—it was freedom at its best,” Moran said in a video interview. “It was joy, happiness…a mixture of a whole bunch of great emotions. I loved it.”

Configurations of this electric bike may be deemed as an off-highway vehicle, or may qualify as an electronic personal assistive mobility device, depending on the specific trail, state or country of use. In some circumstances, it may not be legal for a driver without a physical disability to operate this ATV on road. Also check your local laws regarding vehicle lights, licensing and insurance.

Up Next: Bikepacking Made Easy: An Illustrated How-To