If you squint the Continuum looks like a normal bike. But focus closer and you’ll notice it has no chain, no gears, and its tires have hundreds of tiny spikes. 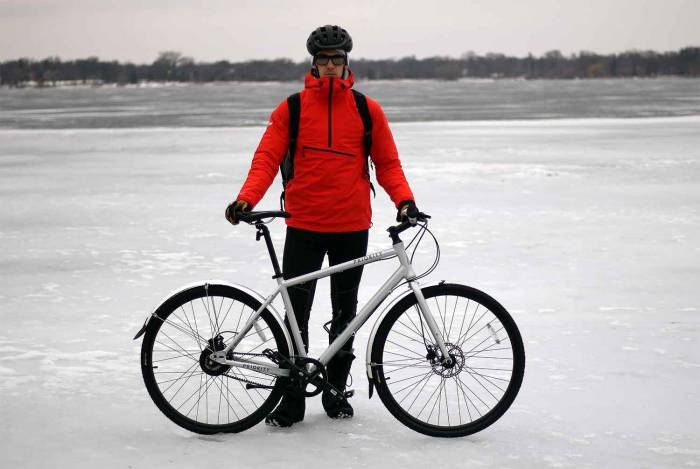 Biking in the cold months takes commitment to two wheels. But rolling on ice, snow, or salt-encrusted pavement in a cityscape is more doable than ever with new gear developed for the discipline.

I rode the Continuum from Priority Bicycles this month for an upgraded winter-biking experience. After years pedaling fat bikes, single-speeds, and cyclocross models on snow, the Continuum brought something different and new.

Backing up, I’ve been a winter rider for more than 10 years. I have pedaled in winter ultra events and alleycat races, and I’ve written on the subject extensively.

These tips and tricks will keep you upright and warm while cycling in the snow and cold of winter. Read more…

As a resident of the snowy icebox that is Minneapolis, Minn., I bike to get around in winter for the challenge and (sometimes) the fun. It’s a strict utilitarian play, too, as riding lets me avoid parking headaches and traffic jams when weather hits.

Priority Bicycles visited town earlier this month. The brand brought a fleet of its Continuum bikes to Minneapolis for a demo. Each was set up with studded tires, fenders, lights, and other accouterments made for riding in the cold.

It costs $899 as a base, and the price inflates to $1,034 with the company’s winter package that includes studded tires and lights.

I rode with the Priority Bicycles crew and its founder David Weiner. He talked about the philosophy behind the company, including a mission to “make cycling simple for recreational riders” and designing bikes that are “easy to buy, easy to ride, and free of routine maintenance.”

These traits are demonstrated in the Continuum. But it’s far from a run-of-the-mill bike. For starters, this model (as noted in the intro) has no gears and no bike chain. Instead, it relies on a transmission and belt drive.

The belt drive, made by Gates, requires no lube and minimal cleaning. It’s a nice feature on a winter bike, which will need to put up with road spray and gunk. When riding, the belt drive has no stretch or play; it feels like a chain. Gates is a high-quality belt drive proven to be durable and reliable in many bike models.

The lack of gears is weirder. You don’t shift to increase or decrease resistance for speed; you twist a handlebar-mounted grip. That interface manipulates something called a Continuously Variable Transmission, made by NuVinci.

It’s not a new thing. NuVinci was introduced in 2006, though the system has not caught on very big in America. It works by trading “gears for spheres,” as the brand puts it.

The NuVinci system is contained in a wheel hub and uses rotating spheres set “between the input and output component of a transmission.” Tilting the spheres inside the hub (by manipulating the handlebar grip) changes contact diameters and varies the speed ratio as you pedal.

Unlike exposed gears and derailleurs, the NuVinci setup is more protected from snow or other elements. It can perform for more than 12,000 miles without maintenance, the brand cites.

While riding, the NuVinci system is easy to use. It seamlessly increases and decreases resistance. The brand notes it’s comparable to an 8- to 21-gear bicycle drivetrain.

I rode with the Priority people for an afternoon and then borrowed the bike for a test and review. It is faster than it looks — I found the range offered by the NuVinci system adequate for steep hills, flats, and downhills.

The Continuum’s design is stable on snow and icy roads. The flat handlebars and frame geometry give a confident, semi-upright position.

Pedaling hard on the Midtown Greenway path near GearJunkie HQ the bike cruised to 25mph with little effort. I hit a puddle of slush, bracing for skidding and road spray. But the bike was solid, its fenders blocking the spray, studded tires gripping icy ground.

Klondike Snow Tires by Kenda give traction. They have 120 studs per tire, biting into slippery surfaces as you ride. (Note: A number of studs fell off the tires after about 30 miles of riding — not a big deal, and these tires do have good long-term test reviews, but it’s a pattern I hope does not continue as I ride.)

Fenders come stock, even without the winter package. The front and rear guards keep spray off as you pedal. They are needed in winter and a nice add-on for the rest of the year.

It comes with hydraulic disc brakes and overall mid-grade parts. The frame is aluminum, which is better than steel for winter as it’s not susceptible to rust.

The bike is sold in three sizes. It has a kickstand and is marketed to city riders, commuters, and people who want a no-fuss bike they can buy online. (Priority sells primarily direct from its online store, not at bike shops.)

Overall, for this “first look” review I rode the Priority for a few days in the city. The model lives up to its premise of offering a new kind of simpler winter-riding solution.

The price is fair, starting at $899 as noted above. The winter package adds $135 (for studded tires and lights), which is a plug-n-play conversion. For many commuters, the Continuum will be a perfect bike for year-round use.

However, for commuting and getting around town in the coldest months of the year it’s a noteworthy bike.

–See all details on the Continuum from Priority Bicycles.