Massive claims of safety that exponentially outperform other helmets have raised controversy in the bike industry. We tested Bontrager’s WaveCel helmet through city commutes and mountain trail rides to see how it looks, feels, and performs.

With their translucent-green, wavy honeycomb shell, the new line of WaveCel helmets by Bontrager immediately stands out as something different. And the helmets also come with very bold safety claims — so much so that industry safety leader MIPS publicly took issue.

At the core of the controversy (and each WaveCel helmet) is a curving network of slime-green pleats. According to Trek, Bontrager’s parent company, these “waves” undergo a brain-saving transformation during impact. By successively flexing, crumpling, and gliding, WaveCel proves 48 times more effective at preventing concussions than standard EPS foam-only helmets, according to the brand.

But while noggin protection is a helmet’s primary function, riders also need something comfortable and, ideally, cool-looking (in as much as any bike helmet is cool-looking). So we took out two WaveCel helmets, the commuter-focused Charge and mountain bike-friendly Blaze, to see how they fit, feel, and look. We’ll peek at the safety claims and why some in the industry took exception, too.

In short: Bontrager’s WaveCel helmets provide serious peace of mind. The brand’s bold claims, backed up by a perfect safety rating from Virginia Tech experts, add a measure of confidence when riding in traffic or over some gnarly trail. And while the WaveCel honeycomb provides noticeably improved venting — it’s actually breathable — it also results in a more dome-like helmet that docks some style points.

While Bontrager makes some hefty claims, another helmet safety brand has raised concerns about the Trek-owned company’s testing. MIPS, a brand that builds a shear-reducing insert for bike, snow, and motor helmets, released a statement that it was unable to replicate Bontrager’s claims in its own testing. 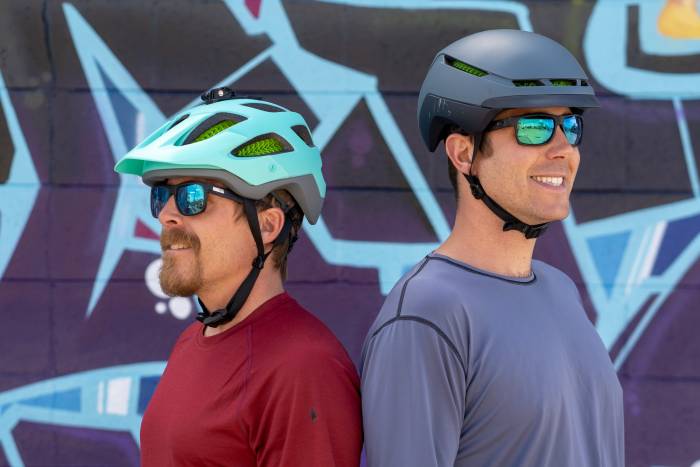 “MIPS subjected the new WaveCel helmet technology to their battery of tests, with results far below WaveCel’s substantial claims of injury prevention,” the report began.

Outside Magazine’s Joe Lindsey did a solid report about the controversy and the science behind it if you’d like to learn more. We’re not going to jump into safety testing in this article but will nod to the fact that Virginia Tech’s helmet review institution awarded the entire WaveCel line a perfect five-star safety rating. 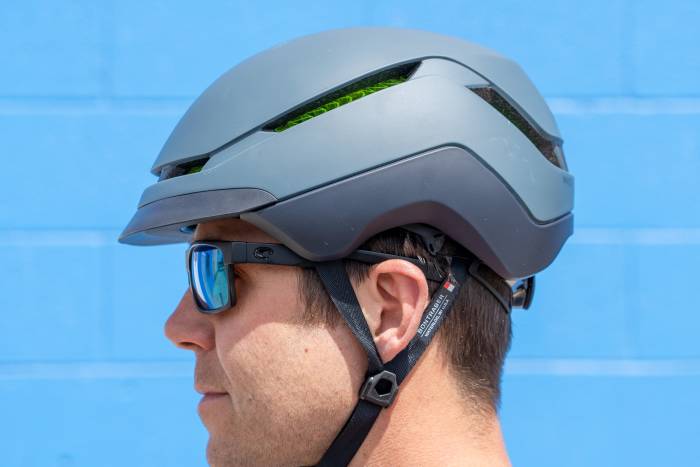 The first run of WaveCel helmets comprises four models: two for road, one for mountain biking, and one for commuting. I’ve been wearing the Charge commuter option pretty much daily for the last month.

My morning/evening commute takes me right through the heart of downtown Denver and along a paved bike path. About 4 miles long, it’s a pretty representative sampling of the distance and terrain of daily commutes.

I’ve also taken it on a few longer rides — more than 10 miles — to try out how the Charge feels for an hour in the saddle or more.

First, the downside: This helmet looks dome-y. Particularly in the front, over the brow, this helmet protrudes over the head noticeably more than other modern helmets. Its styling and colors are sharp, but the outer size leaves a little to be desired.

That said, I’d wear a beer cooler on my head if it provided unrivaled protection against concussions.

But while it looks bulky, the Bontrager Charge WaveCel feels surprisingly light. The brand claims the WaveCel liner adds about 53 g (just under 2 ounces) to its helmets, and I hardly noticed it.

What’s more, the helmet definitely feels more breathable than my EPS helmets. Despite the Charge’s understated vent ports, I never sweat heavily wearing it. Even on 75-degree days in relentless Colorado sun, I never wet out the helmet’s soft liner pads. For ventilation, WaveCel definitely delivers.

The helmet fit was also great and had zero play. And the Boa closure system was light and easily accessible. As for nighttime visibility, the Charge has about a 2-inch-wide reflective patch on the back of the helmet. 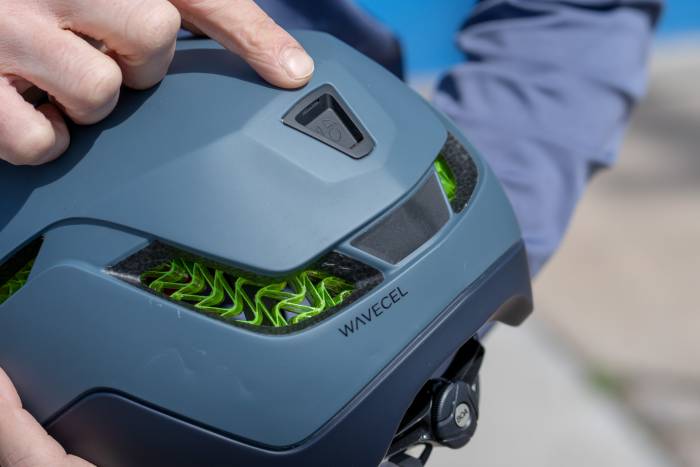 Bontrager also added a magnetic slot for its BlendR light mount on the rear of the helmet. This is a nifty, modular system Bontrager developed that allows users to swap a variety of peripherals (computer, lights, action camera) on a magnetic base with interchangeable mounts.

However, the Charge comes with a BlendR light mount that only works with Bontrager’s BlendR-compatible lights — which I don’t have. So I took it off (simply pulled it off the magnetic slot), and wouldn’t ya know it? I lost it.

For me, this accessory isn’t worth whatever it adds to the cost of the helmet because I don’t have Bontrager lights and the thing is easy to misplace. But for those who do have Bontrager accessories, I imagine this is a solid selling point.

At $150, the WaveCel Charge is certainly not the cheapest commuter helmet on the market. You could nab a basic Bontrager helmet for as little as $25. But anyone who’s serious about cycling knows that $150 is not exorbitant in the bike world.

And for the peace of mind the latest in concussion-prevention technology brings, it seems like a fair price to me. What’s more, Bontrager makes a one-year guarantee on all WaveCel helmets. If you crash in the first year, the brand will send you a new one at no charge. So basically, you get two helmets for the price of one. That’s important because these helmets are one and done — if you crash, the WaveCel tech will absorb a lot of the impact, but will also be irreparable. Of course, you should replace any helmet after serious impacts.

Overall, I find the Charge a solid buy. The guarantee is stellar, it’s very comfortable and breathable, and WaveCel adds a fair amount of riding confidence. All that more than makes up for a helmet that lacks in the fashion department. 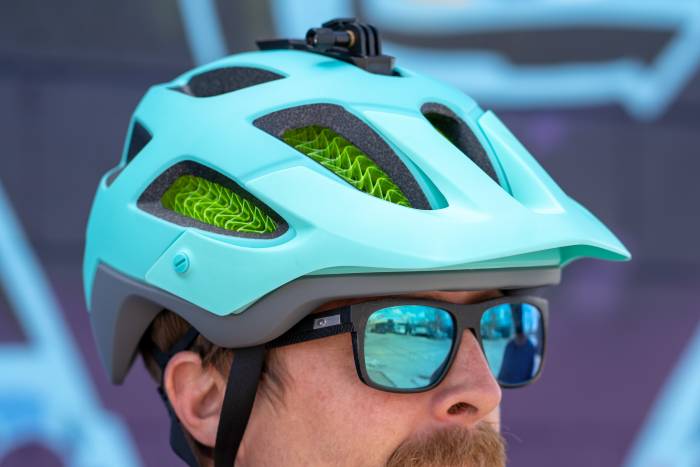 I’ve used the Blaze on both trail rides around Denver and a few commutes to the office just to get more familiar with it. Rides range around 10 miles on hilly foothills. Given that it’s been mostly cool and dry during my rides so far this spring, I don’t have much experience at hotter temps just yet. I’ll update as time goes on.

The Blaze also looks, well, unique. The test model the brand sent us is seafoam green, which is a very trendy, emotion-triggering color for some. It also clashes with a lot of other colors, so I’d probably choose a different one given the option.

And like the Charge, it’s very bulky. There’s just a lot of helmet here. But if you’re like me and not too worried about what other people think, added safety is worth a couple dings on the style meter. 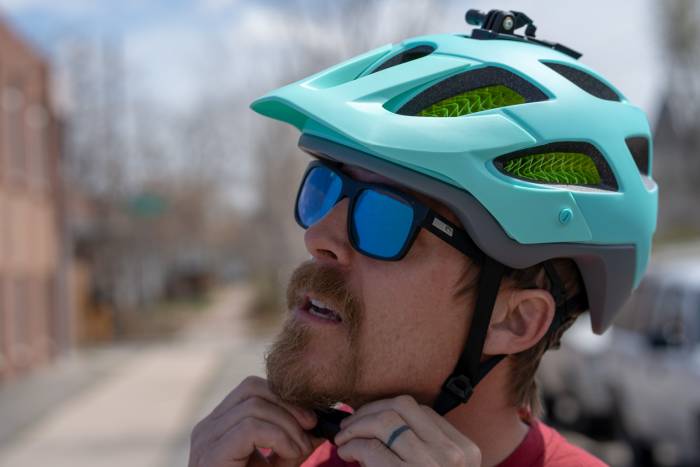 The Blaze fits incredibly well. It’s the first helmet I could literally tighten around my head, turn upside down, and not shake it off — even without fastening it. And even hugging my head tight enough to stay on without a strap, it still feels comfortable.

The helmet also ventilates at least as well as others I’ve worn in the last few years. Again, it’s been cool on most of my rides so far this year. But I foresee a well-ventilated head when riding in hotter weather this summer.

This is a slick feature. A small magnetic mount holds an action camera at the top of the helmet. The beauty of the mount is that it’s instant-on, instant-off. So for those who want to grab some footy on the descent but don’t want to have a big camera on their head all day during the climbs and slower portions of a ride, just clip it on or off and stow it in a bag.

The mount seems secure. But whacking a stick would almost surely knock it loose, so watch your clearance riding through forests.

The Blaze is much more expensive than the Charge commuter helmet at $300. And that significant price tag puts it head-to-head with some really excellent helmets.

So this is one I’d put in the “consider” category. A few plusses are that, if you damage the helmet in a fall within one year of purchase, Bontrager will replace it for free. That could be a good deal if you ride hard and crash often.

So if you like the style, or can simply get past the slightly bubble-headed look it brings, this is an excellent helmet that excels when comfort and ventilation are paramount.

Up Next: Singletrack Mind: Meet the Biker Leaving a Legacy in Dirt