So, I was excited to try the KICKR ROLLR, a hybrid roller trainer that locks in the bike’s front wheel so you don’t go flying if you lose concentration while riding. I was also interested in ROLLR because, unlike other cycling rollers, it syncs with online training programs such as Wahoo SYSTM, Zwift, and more.

In short: My experience with ROLLR was mixed, though it’s pretty clear that a firmware update could fix most problems. I liked the more dynamic ride, which pushed me to tune into smoothing out my pedal strokes.

Riding ROLLR felt a lot more like riding a bike than my KICKR Smart Trainer does. But KICKR ROLLR didn’t always modulate power when synced with apps, including Wahoo’s SYSTM app, making me get off the trainer mid-workout to unplug and reset ROLLR, sometimes more than once per ride. 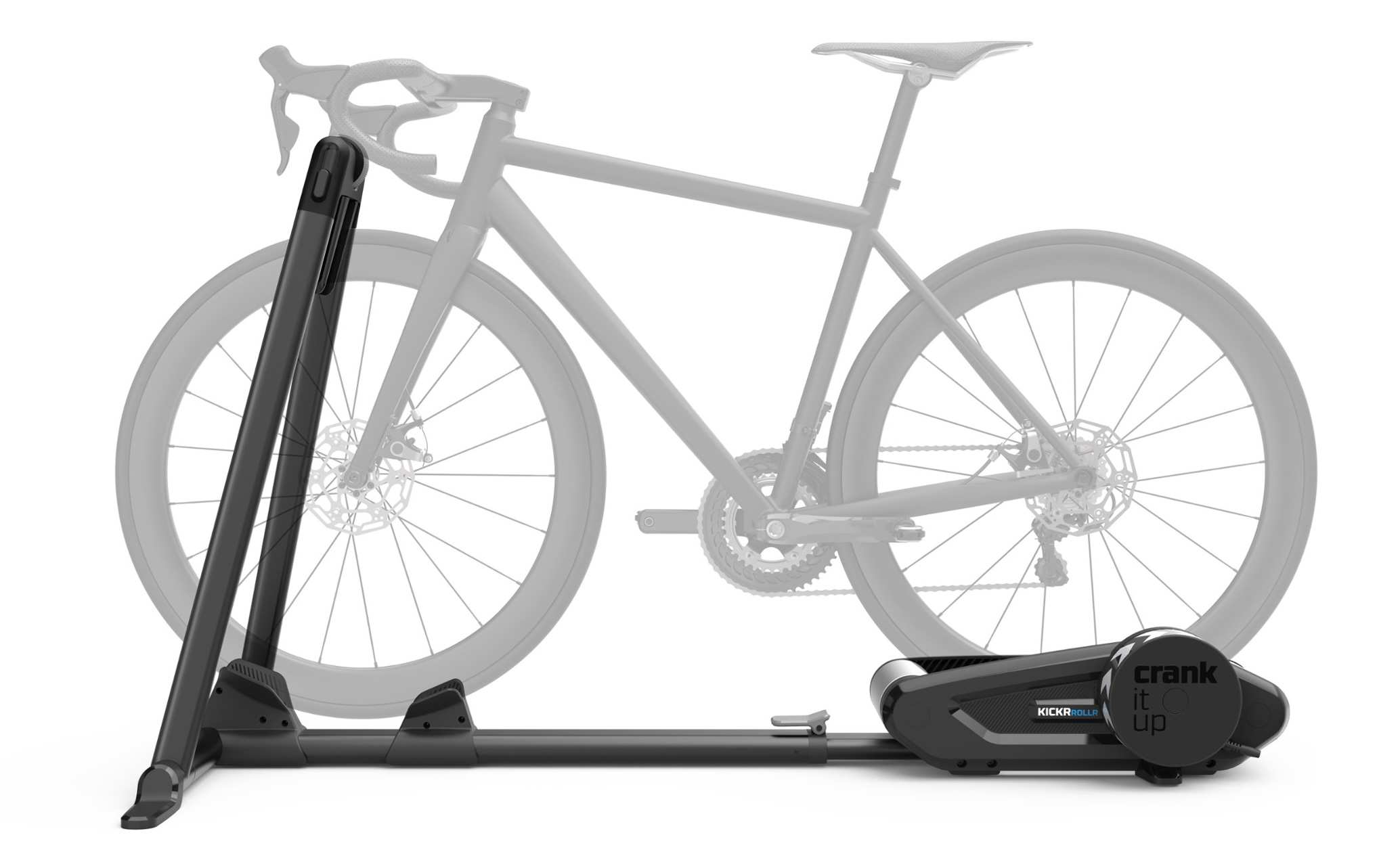 It was easy to set up ROLLR. It arrived in three pieces and only required a few bolts and a hex key to get it fully assembled. Once the flywheel/roller was connected to the KICKR ROLLR frame and the front wheel brace, a lever let me slide the front end to adjust the frame to the length of my bike.

With my rear tire resting balanced on the two rear rollers, I clamped down ROLLR’s front brace on my front tire. The front clamping mechanism maxes out at a one-inch tire width, but the safety tire gripper holds most 700c road tires.

The gripper also keeps your bike — and you — upright and steady when getting on and off the bike. And it provides stability for attacking high-wattage intervals, pedaling with no hands, and just riding along.

The benefits of training for cycling in the offseason are inarguable. A few years ago, after 3 months of riding the trainer complemented by a handful of fat bike rides, I hopped on my bike and completed the Mid South Gravel.

This year, on my first outdoor ride, I climbed a hill I had never made it up without resting. It’s a great way to get exercise in the offseason, and trainer riding lets you get your heart rate up on your own schedule.

The trainer took minutes to set up. I didn’t have to pull wheels off my bike to use the ROLLR, so I could transition quickly from inside to outside riding, which was particularly handy for springtime in Vermont.

The hybrid roller/trainer platform is a great alternative for many riders. Because the back bike wheel moves around on the rollers, riding ROLLR was more realistic than riding many other trainers, including a KICKR CORE.

And I didn’t have to set my trainer up in a doorway for fear of being ejected, which is a real-world hazard with regular rollers.

KICKR ROLLR’s dual roller lets the rear wheel move side to side naturally to match your pedaling. It uses KICKR’s flywheel technology, the same tech used in other KICKR trainers, to control resistance.

Wahoo says that the 10.5-pound flywheel in the KICKR ROLLR provides the precise inertia needed to recreate an outdoor ride feel while training indoors. It’s true.

Riding KICKR ROLLR, the system knew if I was pedaling in smooth circles. Because the back end of the bike moved slightly from side to side as I pedaled, not only were workouts harder than on a KICKR Smart Trainer, but they also felt a lot more like outdoor riding.

To sync KICKR ROLLR with Wahoo’s SYSTM and other training apps, you need to add an ANT+ power meter. That’s the only way to get cadence and power numbers.

If your bike doesn’t have a power meter for tracking power and cadence, you can buy Wahoo’s Speedplay Powerlink pedals, sold separately. But ROLLR is compatible with most ANT+ power meters.

And you don’t need a power meter to ride KICKR ROLLR. In manual mode, the trainer works like a very stable set of conventional rollers. You can track speed and distance from the KICKR ROLLR without additional sensors.

It’s hard to argue that $800 for a bike trainer is affordable. But KICKR ROLLR is priced in the middle of Wahoo’s smart trainer range.

Wahoo’s Flywheel Technology: Not That Smooth

Wahoo says that its flywheel technology creates a super-smooth ride no matter how hard you’re cranking. Though the ride felt smooth, my power numbers jumped around. Even when I got in the zone and focused fully on maintaining stable power output, I could not.

On the Wahoo KICKR Smart Trainer, it’s relatively easy for me to keep power and cadence consistent. (See pictures of my ROLLR power curves below.)

Over my weeks of using the ROLLR, I got better at it. I hope to eventually master that challenge.

I reached out to Wahoo support and was told that I needed to shift into an easier gear. Even in my easiest gear, I had to dismount multiple times to restart the trainer.

I tried shifting to get into the gear I needed, and I tried leaving the bike in one gear and letting ROLLR control the resistance. Neither worked all the time.

I’m hanging this trainer up until there’s a firmware update that fixes the issue. It’s no hardship because outdoor riding season is here. But I hope an update will be coming soon.

It’s possible the issue originated from Wahoo’s Powerlink Pedals, not ROLLR, but I have not been able to tell which device is the culprit. I also tested the Powerlink Pedals with ROLLR because I don’t have another way to measure power and cadence without them.

And the pedals came with their own awesomeness and frustrations. They paired seamlessly with the KICKR ROLLR, and they tracked power and cadence.

The pedals weren’t bad to set up, but they mount to road shoes only. They’re incompatible with any shoe with a tread. As I am primarily a gravel and MTB rider, I had to invest in new kicks as well as the trainer and pedals.

It was extremely hard to click into the pedals for the first dozen rides. Eventually, it got better. A Wahoo customer service representative suggested a drop of bike chain lube on the pedals, which helped. So did perseverance.

I loved the feel of Wahoo’s new KICKR ROLLR. And I hope that by the time I’m ready to pedal indoors again, the trainer will let me ride with connected apps without having to stop and restart my workout.

Wahoo is currently offering a special bundle with ROLLR and single-sided Powerlink pedals for less than ROLLR normally costs alone. If you’re confident, like I am, that ROLLR will catch up to the quality and performance standards of other Wahoo products, it’s a great buy.

The Best Bike Trainers of 2021

When weather or timing just don't allow for an outdoor training session, bike trainers give you the inside option. Here are the best bike trainers of the year. Read more…

The Best Bike Computers of 2022

Riders today can fine-tune their performance in almost every way imaginable with the incredible features and convenience offered by the best bike computers on the market. Read more…

Up Next: Rare Sighting: Trail Builder Emerges From Hibernation for Spring