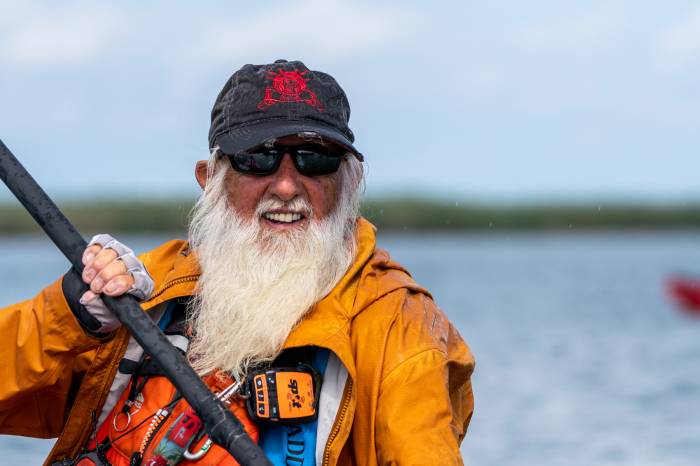 Dale 'Greybeard' Sanders is 87 and shows no signs of slowing down; (photo/courtesy Dale Sanders)

Dale Sanders is stubborn. That’s the first thing he’ll say when you ask him how he manages to keep snagging age-related records on America’s classic long-distance routes.

Sanders, an 87-year-old Kentuckian now living in Tennessee, completed a thru-paddle of the Mississippi River on Sept. 7, 2022. And because Sanders has a sense of narrative style — in addition to a magnificent beard — he did it in 87 days.

His feat was witnessed by an observer for the Guinness Book of World Records. When Guinness certifies the results, Sanders will become the oldest person to paddle all of Old Man River’s 2,350 miles end to end (at least according to Guinness).

Sanders has a long history of adventure on and off the water. An early interest in acrobatics and swimming led to a Navy career, springboard diving and spearfishing competitions and awards, and a round-the-world backpacking trip with his wife, Meriam.

He retired from the Navy after 37 years, and then continued working in parks and recreation until his formal retirement in 2002. Never one to sit down, Sanders’s post-retirement hobbies included river guiding in Memphis, Tenn.

When he turned 80, Sanders retired again, this time to tackle a series of increasingly difficult long-distance adventures. He completed his first thru-paddle of the Mississippi in 2015, followed by a thru-hike of the Appalachian Trail (AT) in 2017 at the age of 82.

In 2020, Greybeard became a Guinness World Record Holder as the oldest person to hike rim-to-rim-to-rim in the Grand Canyon. The provisional Mississippi River Guinness Record is his latest feat. And while some of the records are official and some aren’t, all were physical and physiological challenges for the lifelong adventurer.

A film crew accompanied Sanders on his recent Mississippi River journey. The team plans to premiere a documentary about Sanders, his river trip, and his life at a film festival in Chattanooga, Tenn., in January 2023.

We sat down with Dale “Greybeard” Sanders to talk about paddling the Mississippi, the challenges he faced on his many journeys, and the advice he gives would-be adventurers. The following interview has been edited for clarity and brevity.

GearJunkie: You set the Mississippi River thru-paddle age record 7 years ago, and it was broken by Stan Stark in 2020. What was your motivation for going out and trying to break this record again?

Sanders: When I set [this record] 7 years ago, Guinness would not approve it cause they said they didn’t approve age records [at the time]. So, sometime between when I applied in 2015 and when [Stan Stark got the record in 2020], that changed.

So, one reason was I wanted the record back. And it was a wonderful opportunity for me to get a reward for 2015 and 2022 … 2015 will never be a Guinness record, but it would be like, you know, I got my day in court.

As far as conditioning goes, what is your training strategy between expeditions?

I stay active. Just really stay active. And then, if I stay active, it doesn’t matter if it’s a hike or a paddle. Most of my expeditions have been in one of those two venues.  Keep my heart rate up every day or two and follow my heart doctor’s recommendations. I try to eat well, and I have a good home life. I’m happy. So those factors are all factored in.

I’m very competitive and have been since high school. You know, I was in competitive spearfishing for many years too, and also a national champion in that area … then I started competing in competitive swimming and diving as well and winning awards there.

It takes a certain type of competitive, stubborn personality to complete long-distance trips like that.

You do it because, by golly, you’re just going to do it. You’re not going to quit. You know? You just bear it out.

If you were to call the Appalachian Trail Conservancy, they would tell you yes, Dale Sanders held the age record from 2017 to last year when Nimblewill Nomad broke my record. And they would also tell you that [first Appalachian Trail thru-hiker] Earl Shaffer was 79, and was the oldest until I hiked in at 82 years old. And it was really a big morale booster for me.

Including the Grand Canyon, which of these accomplishments was the most difficult and why? And which was the most fun or enjoyable?

Well, the Grand Canyon, that’s a Guinness record. And ironically, the Grand Canyon happens to be the easiest record that I’ve ever gotten. [Another easy one] was the first time I paddled the Mississippi River in 2015. The conditions I was paddling under were high water, not much headwind, and not very hot.

And I was 7 years older, too! That might have a bearing on it. It was hard. It was really, really tough.

How many hours a day were you paddling, and what kind of mileage did you put in?

We were paddling probably about 9 hours a day, on average. About 30 miles a day. I started on my 87th birthday, June 14, and we paddled down and tasted salt water 87 days later. And that was a self-imposed deadline. Most people do it between 90 and 50 days. So I figured 87 was a good number. We needed a goal, and that was our goal. We actually got there 5 days early, so we just waited at a hotel so we could finish on day 87.

And you were in a canoe — not a kayak, correct?

Correct. I don’t kayak. It’s a totally different world. It’s so much harder to do a canoe. A kayak just slides right through the wind. As far as Guinness is concerned, it doesn’t matter what kind of boat it is, as long as you paddle it under your own power. But I’m a purist when it comes to what types of craft to use.

Well, I’ve been a canoe instructor since 1954. And it’s a very traditional way of travel, especially in the United States. So for me, it’s just sacred. You wanna do the river, you do it in a canoe.

Besides the heat, low water levels, and the headwinds, were there any other challenges this time around?

Mosquitoes and mud. The water is so low right now, and the bottom of the Mississippi River is mud, not sand. The water has gotten below the sand line on the shores, and so sometimes you have to walk through mud, sometimes up to your knees, to get to the sand and find a place to put up a tent. And the mosquitoes are just atrocious on the river. Terrible.

You had a documentary crew following along with you for this adventure — did recording the process change this experience for you?

Yes. They had their own boat. I was going to paddle on my own, but I got to thinking that at my age, and the conditions of the water, I didn’t want to do it by myself. I wanted somebody there. It’s just the comfort of having another soul with you.

It was tough, and it was really nice to have somebody to talk to, to help get you out of jams. They couldn’t give me any downstream assistance [for the sake of the record], but sideways assistance was fine.

For instance, if we were stopping for the evenings, they could help me pull my boat up on the shore. I knew I was going to lose out on a lot of river angel assistance by having two or three people paddle with me, but I made that decision because of safety and not wanting to be out there alone.

What advice would you give to someone who wanted to paddle the length of the Mississippi?

It doesn’t matter what it is, paddling or hiking. If your heart’s not in it, if you’re not willing to eat it, live it, and sleep it, don’t do it. Your heart has to be in it. It’s so challenging. You get times when you go, “Why am I doing this?”

And what advice would you give someone who wanted to break any of your age records?

That records are made to be broken. Talk to me and I’ll give you all the help I can. You’re not going to hurt my feelings. 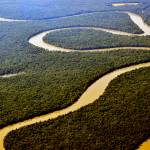 A team of four, led by a father-daughter duo, claims to have broken the 18-year-old speed record for paddling the entire length of the Mississippi River. Read more…