After moving into a house near a few rivers in Minneapolis, my wife and I began searching for a kayak. First, we had to decide between two single kayaks or a tandem kayak. I was fine with a tandem kayak as long as we found one whose performance didn’t suffer when solo paddling.

Realizing that was a big ask, I started doing some research.

I didn’t even glance at inflatable kayaks. Especially with the desire to paddle efficiently, I just figured it was too much to ask of a flimsy inflatable. I looked and looked at tandem kayaks across the web. Though there were options out there, I just couldn’t get over the weight of rotomolded kayaks — most around 70 pounds and some upwards of 90 pounds.

Those weights approach canoe weights, and I prefer a kayak for the speed, maneuverability, and portability. Then I stumbled upon Aquaglide’s new lineup of kayaks.

In short: The Deschutes 145 far exceeded my expectations. The lightweight — 27 pounds! — watercraft is easy to set up, a breeze to carry, and extremely capable on both Class I and flatwater. Plus, it rolls up into a carrying case that can be easily checked at an airport, and at $800, the Deschutes 145 won’t break the bank. 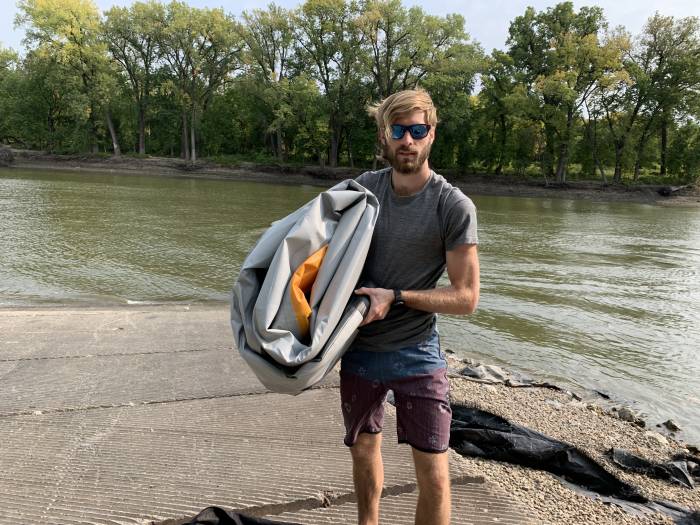 The Deschutes 145 inflatable kayak ships in a 30 x 28 x 16-inch box and includes the kayak, two seats, a storage backpack, a quick-release fin, and a patch kit. A pump of some sort is required to properly inflate the boat and is not included. Aquaglide sells a few pumps, or you can visit your local outdoor retailer.

Note: Be sure you get a pump with a gauge on it. The Deschutes 145 has psi inflation recommendations on each inflatable section. For the best paddling performance, you will want to properly dial in the psi. 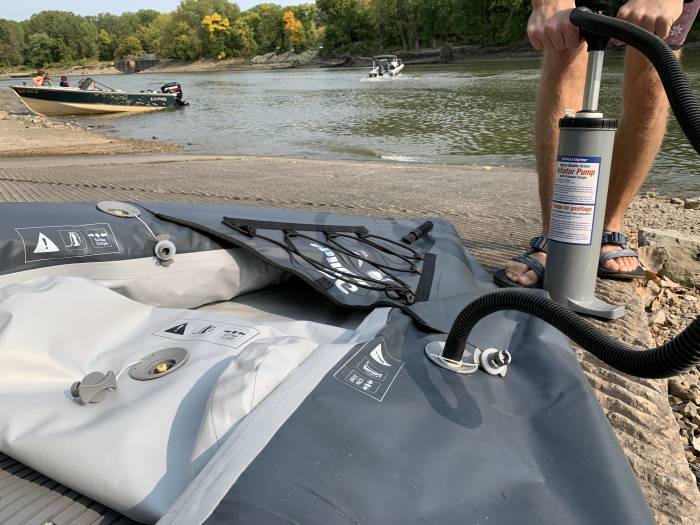 The first time I set it up, it took me about 10 minutes. After a few uses, I’m now down to approximately 4 minutes for setup. Simply lay out the deflated kayak and begin pumping air into the sidewalls, then the bumpers.

Next, install both seats. Each seat has two lines of Velcro that line up with corresponding lines of Velcro on the floor. But there’s also left and right straps that attach to the sidewalls, allowing you to adjust the tension of the seat backs. That’s it!

The Deschutes 145 boat gets extremely rigid when fully inflated and therefore feels eerily similar to a standard kayak when paddling. With its quick-release fin installed, it tracks very well in flatwater. With it removed, the kayak becomes surprisingly responsive and maneuverable in narrow channels.

If you’re paddling in flatwater, be sure to install the quick-release fin. If you need optimal maneuverability in winding or narrow rivers (or if you know you’ll be in shallow water), leave the fin off.

Additionally, there are some drain plugs at the back and front of the kayak. If you’re paddling in flatwater, be sure to securely close these. If you’re hitting some small rapids and will need to quickly drain water that comes in, you can loosen them.

We paddled a few times on a lake, a few times in various shallow and narrow city creeks, and once on a wide and slow-moving river. We also have plans to hit some faster, bigger water, which will make for an interesting test.

Once in the water, I really forgot I was in an inflatable kayak. The rigidity is similar to a whitewater raft, which means it’s taut but also flexible going up and down rapids. The EVA floor is also flexible but stiffer than an inflatable floor would be. I found it comfortable and didn’t notice issues when we moved around.

My wife and I sat comfortably in our seats and paddled a straight line with ease thanks to the quick-release fin. The kayak is somewhat wide (40 inches), so at times we found our paddles hitting the sidewalls due to our seats sitting low in the boat. Ultimately, though, that wasn’t a major issue.

The front paddler has a foot bumper to gain leverage when paddling. And the rear paddler can use one of the larger internal bumpers as a footrest and for paddling leverage. 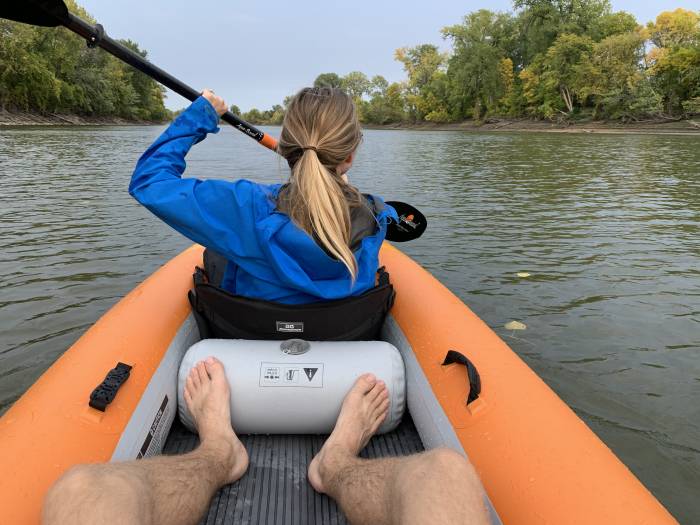 Along shallow and narrow creeks, the kayak rode high in the water, allowing us to pass over rocky shoals that other hard-sided kayaks couldn’t. It’s a long boat (14 feet 6 inches), so it’s not the most nimble kayak. But the trade-off there is that it’s really responsive. The length is really the only limiting factor in its maneuverability, but that’s what you get with a tandem kayak.

As for durability, I’ve had zero issues. We bumped against downed trees, sharp rocks on banks, a few river bottoms, and even portaged a few times through thorny woods. There are a few scratches on the sides and bottom, but nothing more than cosmetic. It’s also worth noting that it has never deflated on me despite use in cold water.

At the bow and stern of the boat are a few storage areas to keep a dry bag or PFDs handy. If you’re padding in mellow water with the drain valves closed, both of those areas stay very dry. Additionally, there are bungee deck lines at the front and back of the boat to help secure additional gear. There’s certainly enough storage space to accommodate overnight trips and multiday expeditions.

I’ve also spent a little time solo paddling in this tandem boat and have been really impressed. The weight distribution is just right, at least for me, to where the front doesn’t rise up much. It’s still easy to keep a straight line. Plus, at only 27 pounds, it’s really easy to set up and transport by myself. 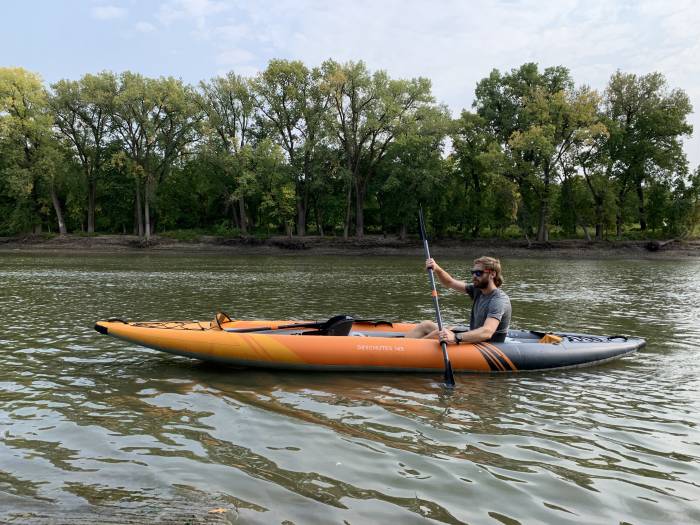 I haven’t experienced many downsides when solo paddling. I need to do more of it, but so far I’ve really enjoyed my time in this rig. Some tandem kayaks that I’ve paddled alone have been a bear to handle, leaving me dreading a solo ride. But that hasn’t been the case with the Deschutes 145 tandem.

Bonus: Travel With an Inflatable Kayak

My wife and I are going to check the boat on an upcoming flight to Bend, Oregon. I’m pretty stoked to travel with the kayak and to paddle its namesake river, the Deschutes, in central Oregon. Obviously, checking a tandem kayak on a flight is simply not an option for rotomolded builds.

But, with the accompanying carrying case that houses everything, the Deschutes 145 tandem kayak can be shouldered to an airport and checked! I don’t even think airlines will consider it “oversized.” 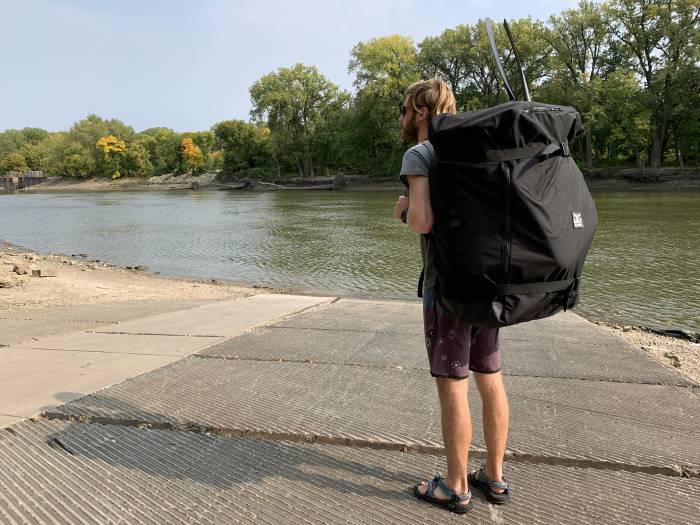 I’m also currently without any roof racks on my Subaru Outback. So another plus of this tandem inflatable is the ability to deflate it and toss it in the trunk. It also makes storage easy, especially during our long Minnesota winter months when it’s pointless to have a massive kayak taking up space.

Another major bonus is that Aquaglide provides a 2-year limited warranty on the Deschutes 145 tandem kayak.

If you’re going for pure performance in a single discipline (i.e., whitewater), you could probably find a higher-performing rotomolded tandem kayak than the Deschutes 145. (But I can guarantee you it’ll be heavier, more difficult to transport, and nearly impossible to check on an airplane.)

A note on size and shape: At times I found myself wishing that the kayak was just a bit narrower. The width does provide more stability in whitewater, but on mellow water, it can be a bit of a reach to paddle over the sidewalls. Although the paddle motion is a bit different (wider) than with narrower kayaks, I got used to it. And in rapids, I’m sure I’ll be thankful for the stability that the width provides.

As a recreational kayaker who enjoys both flatwater and river paddling, the Deschutes 145 tandem is just right. And because my wife and I love to travel, the ability to bring it with us virtually anywhere is exciting. Overall, the Deschutes 145 really impressed us with its easy setup, tandem and solo paddling performance, and rigidity when inflated. 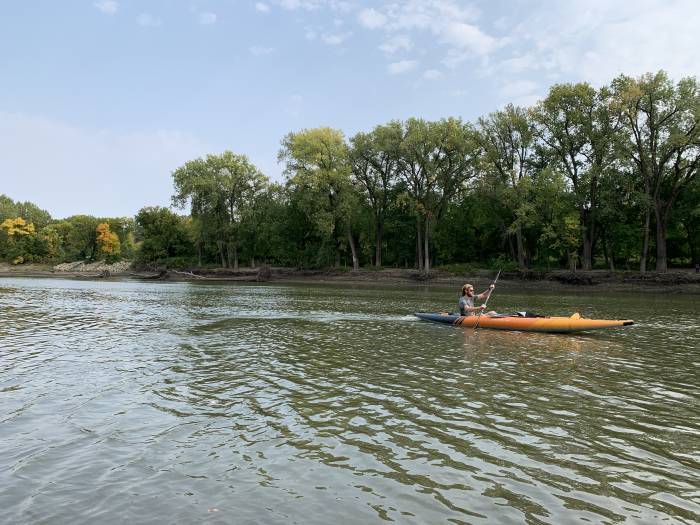 Aquaglide makes several inflatable kayaks. There’s the Blackfoot Angler kayak for fishing, some budget-friendly kayaks for flatwater and recreational paddlers, touring kayaks like the Chelan and Navarro, and whitewater killers like the McKenzie kayaks. On the whole, the Deschutes kayak lineup is for experienced touring and expedition paddlers.

Bottom line: If you’re a space-saving, ounce-counting, “do-it-all” type of outdoor enthusiast, give Aquaglide a look.

'Beyond the Backyard': Bike-to-Packrafting the Potomac River

Up Next: Raising Kids Outside: Parenthood, Surfing, Thrills, and Balance