Dane Jackson is one of the best kayakers in the world. This new video of him dropping a massive waterfall will leave you in awe.

Whitewater kayaker Dane Jackson teamed up with GoPro for his latest paddle project: dropping down Chile’s Salto del Maule waterfall. It’s the second-tallest waterfall a kayaker has ever attempted to ride.

And this edit is special — you’ll get to see POV footage of Jackson dropping 134 feet into heavy, frothy whitewater. “The water that’s hitting the side of that pool … the stout boil!” Jackson exclaims with equal parts excitement and disbelief.

The Salto del Maule is an epic viewpoint across a fairly regular-looking landscape of flowing river and rocky outcrops. But as soon as the camera gets closer, you see the magic, draw, intensity, and danger that this drop has.

And don’t be fooled by the footage from the ground — this drop is as steep as it gets. 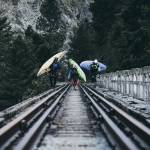 Love kayaking, colorful personalities, and old trucks? Well, you're going to love this video by Filson and Merrell. Read more…