A team of three paddled 125 miles from Havana, Cuba, to Florida. This is the gear they used for the ocean kayak trip.

We climbed out of our kayaks blistered, burnt, and borderline delirious — barely able to stand under our own power. We had paddled nonstop from Havana, Cuba, across the Florida Straits to our native U.S. in 27+ grueling hours.

The project was simple: Paddle from Cuba to Florida. But planning and training were anything but, taking many months.

Elite ultrarunner Magda Boulet advised us on sleep and nutrition and helped us craft a rigorous workout routine. We leveraged our paddling networks of friends and peers to source the right gear and learn what we could from similar crossing expeditions.

And, of course, we had learned a lot from our failed attempt at the same crossing last year. We adjusted our strategy accordingly.

Kayaking From Cuba to Florida: Goal of Understanding

The goal of the project was to better understand what thousands — if not millions — of Cuban refugees have in some ways experienced. Even in a little way, we wanted to taste a small slice of their trials and tribulations during the crossing.

We wanted to know what it was like to puke from overexertion, to be tossed around in big Gulf Stream waves. We wanted to learn what fears of survival had run through their heads in the middle of the night, while alone, surrounded by black ocean.

To achieve this goal, we first had to get the logistics right. We needed to “control the control-ables,” as Magda would often remind us, starting with the right gear.

Below are the resources we relied on to be successful.

The crux was food. And finding smart ways to refuel on a nonstop paddle in heat, humidity, and big waves isn’t easy.

During the day, we feasted on Gu Stroopwafels and steadily drank 10L MSR Dromedaries full of Roctane Summit Tea, which has both electrolytes and carbohydrates. When it’s 80 degrees with near 100 percent humidity, it’s hard to eat and exercise at the same time.

At night, we transitioned to whitebread PB&J sandwiches, lightly buttered pasta, and gummy worms. Whole grains, fats, and proteins take energy to digest, so we focused on super processed foods for the entire paddle.

We paddled Current Designs Storm GTs, which are fast and stable ocean touring boats. These kayaks helped us average 4.9 mph while staying upright in sustained 6- to 10-foot waves. They aren’t the lightest or fastest kayaks in the world but performed well for us.

Rudders played a crucial role in crosswinds, allowing us to do fewer corrective strokes and keep our speed up. The only major modification we made was swapping the stock seat for a more comfortable and supportive backrest.

We used top-of-the-line Sawyer Sea Feather Paddles, which are lightweight, durable, and precise. These cedar and carbon fiber adjustable paddles allowed us to feather the blades to our preferred angle and brace with all our force into large, crashing waves without worry of breaking them. But we did carry a couple spares just in case. 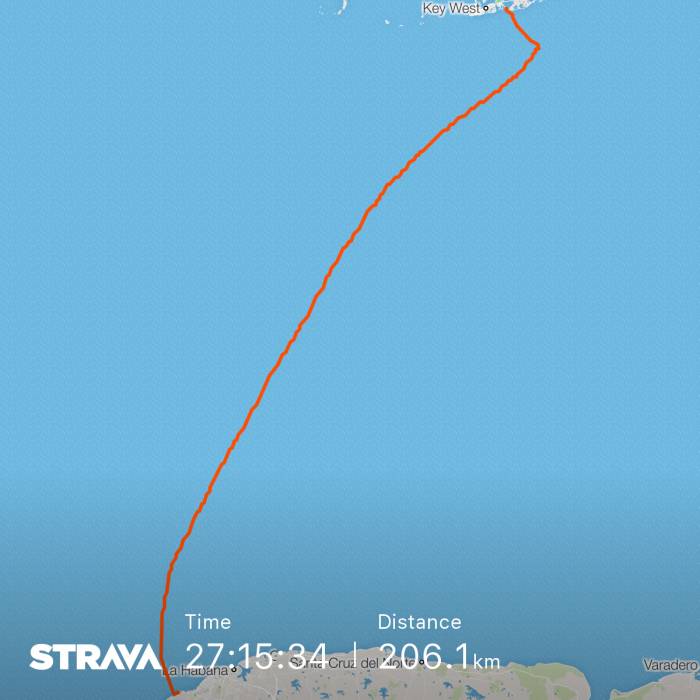 We used Strava’s new feature, Beacon, to track us in real time. It gave us updates on distance and pace and allowed faraway friends and family to monitor our progress. We ran Beacon on our phones and a Garmin watch.

We covered our boats with Snapdragon spray skirts. Our food and spare gear we organized in a variety of SealLine dry bags, along with dozens of ziplock bags full of sandwiches, snacks, and spare batteries. For easy access, we used Sea to Summit deck bags, allowing us to miss only a handful of strokes and get a quick bite.

We each brought our trusted personal flotation devices, battle-tested from years of paddling adventures. I’ve used a Patagonia Lola (now retired) for years and swear by it.

Each kayak was equipped with a two-way radio to communicate with our support boat. We also carried a Garmin Inreach in case of emergency. For nighttime visibility, we wore headlamps and mounted marine lights on the bow and stern of each boat.

In addition to carrying spare gloves, bandanas, and buffs, we were outfitted with lightweight shirts and sun hats from Kavu. While we were fortunate to get mostly overcast days, we still relied on water-resistant zinc-oxide sunscreen to minimize burns. And athletic tape saved our hands from as many blisters as possible.

Up Next: Get Fast, Have Fun in Idaho Backcountry Bike Camps