Founded in San Clemente, California, in 2020, the TANDM Surf tandem bodyboard is the brainchild of one family.

This company is all about the love for watersports and teamwork. It’s led by the Clark family — John and Manya, and their daughters Alleanna (22), Juliette (19), and Lyla (16).

John and Manya Clark first became bodyboard partners when they were married in 1992, and later picked up standup paddleboarding, training, and surfing together. It was important for them to share their love of the ocean with their daughters, who they taught to swim before they could even walk.

Much to John and Manya’s delight, the girls followed in their parents’ aquatic footsteps, participating in water polo, lifeguarding, outrigger canoeing, standup paddling, and surfing between them.

As avid beachgoers, the Clark family members have cumulatively participated in almost every water sport out there — and found that time on the water brought them closer together as a family.

So, they set out to create a board that would allow others to create strong bonds and form memories with friends and family. And, as a result, TANDM Surf was born.

How TANDM Surf Got Its Start

“The inspiration for TANDM Surf is the value of catching waves with another person,” said founder John Clark. “Sharing joy in the ocean builds communities, strengthens bonds, and proves that anyone can catch a wave.”

In March of 2021, the Clark family appeared on ABC’s Shark Tank where they had the opportunity to pitch the concept of their board to the sharks. After some negotiating, two sharks bit and chose to back the brand, allowing the Clarks to expand their company.

A mermaid at heart, I spend most of my days in the ocean and am always excited to try the latest and greatest in watersports. When I first heard of the tandem bodyboard by TANDM Surf, I thought it sounded like a good time but something I wouldn’t necessarily add to my quiver. I was quickly proven wrong.

The TANDM Surf AIR bodyboard is an inflatable, double-wide bodyboard that includes five strategically placed handles and a built-in camera mount. Constructed from military-grade, high-density PVC material, the durable board features a patent-pending dynamic air inflatable design. The board comes with a dual-action pump, storage bag, and maintenance kit.

Taking It for a Ride

The first time my friends and I took out the TANDM Surf bodyboard, we went to our local break fully prepared to get worked. Setup proved to be easy, and we were in the water within minutes.

When we dropped in on our first wave, we were sure we’d nose dive. However, the board was incredibly buoyant and stable, and we easily rode all the way in to the beach.

When we’d had our fill, we headed for the shore and quickly deflated the board and stowed it in the bag — it was an easy fit and there was even room to spare. 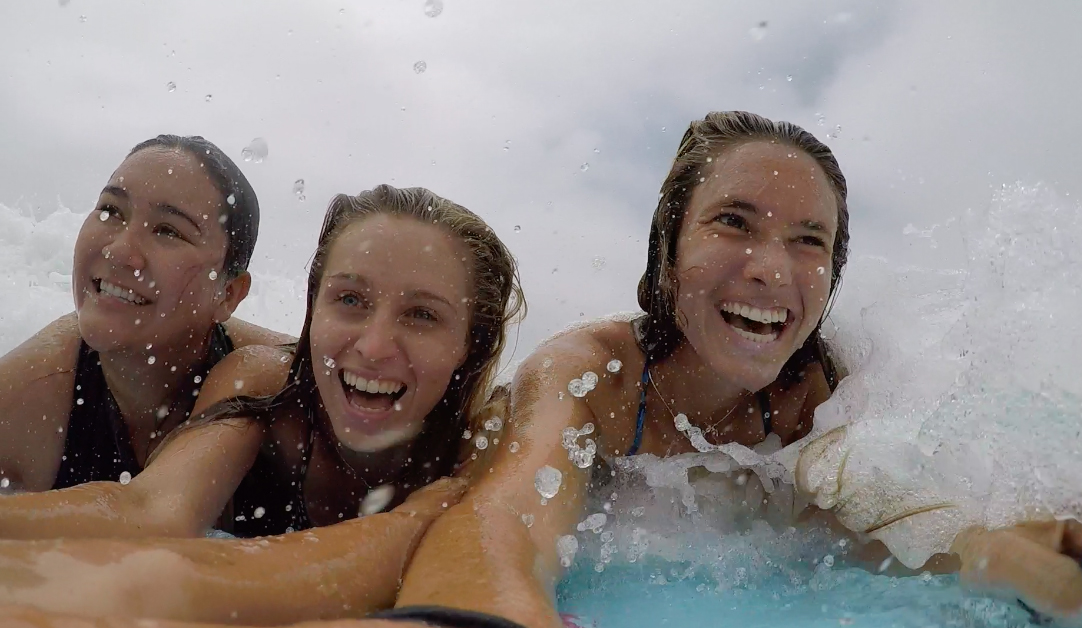 While it was easy to ride waves on the tandem bodyboard, paddling back out was another story. The board is bigger than a standard bodyboard, meaning it takes extra effort to paddle out. For us, fins were a must.

The handles are extremely helpful for getting through waves, but the board doesn’t come with a leash. So, you may consider adding one if you’re concerned about losing it or if you’re taking the tandem out on bigger surf.

A unique feature that we appreciated in testing was the built-in camera mount; it was fun to play back the footage and relive our waves.

The TANDM Bodyboard retails for $459. For this price, we do wish it came with a leash.

A Bodyboard Not Just for Surfing

Since its launch, TANDM Surf has discovered that its board not only performs well in the surf, but it also works well in snow and behind a boat. It has also proven to be a valuable resource for getting kids, people with disabilities, or less-experienced individuals out on the water.

This tandem bodyboard is an especially great addition to the existing market of prone surfboards for those with leg or spinal injuries, paralysis, paraplegia or quadriplegia, and blind surfers and amputees. Specifically, TANDM is great for this market because it provides users with the ability to ride with a guide or family member, and it has lots of handles.

Recently, TANDM Surf has partnered with charitable organizations such as MeWater and Indo Jax to help share and spread the joy of getting people of all abilities out on the ocean. TANDM has also expanded its line to include a tandem surfboard, giving people more options for getting on the water.

I’ve bodyboarded countless times in my life and while I enjoy it, it doesn’t compare to how much fun tandem bodyboarding is. Every time I take someone out to ride with me, they’ve got a smile on their face the entire time — and they can’t stop talking about the experience.

While the price is a bit steep, the quality is exceptional and, really, nothing tops the experience of getting to ride a wave with a friend.

Up Next: Superhero Swimsuit: Speedo Concept Has Built-In Exoskeleton, AI, and More