Home » Camper & RV » Back That Camp Up: Park the Airstream eStream Trailer With Your Phone

Looking to spend a week off the grid, or simply to cut your carbon footprint when you take out your RV? That’s the idea behind Airstream’s eStream concept.

The eStream is a one-off prototype that is not only all-electric but also has a built-in hybrid drivetrain that can help reduce the fuel consumption of your tow vehicle. And, once you reach a campsite, unhitch it and remotely pilot it under its own power. No more backing it into a spot attached to your vehicle! 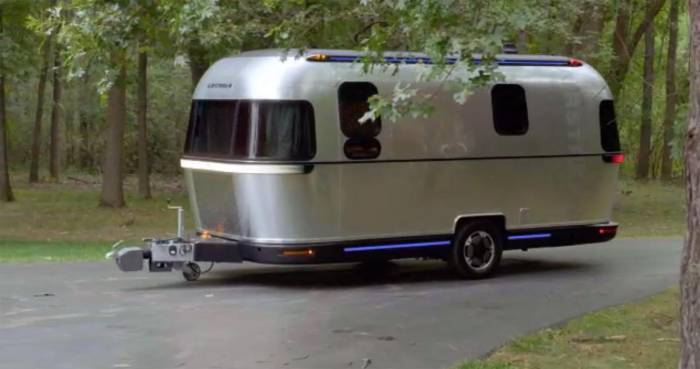 The auto industry is making a rapid shift to battery power, and the recreational vehicle industry may not be far behind. Several electrified concepts made their debut last month at the big RV SuperShow in Florida. One that drew close attention was Airstream’s eStream concept.

The battery-powered 22-foot trailer “represents a peek into our future,” Airstream CEO and President Bob Wheeler said during a media deep-dive this week. And while there are no plans to put the prototype itself into production, Wheeler said it may strongly “influence what you will see … in a couple of years.”

At first glance, the eStream looks just like a classic camper trailer from Airstream, a brand known for its distinctive aerodynamic designs. But a closer look offers several clues that this is something distinctly different. 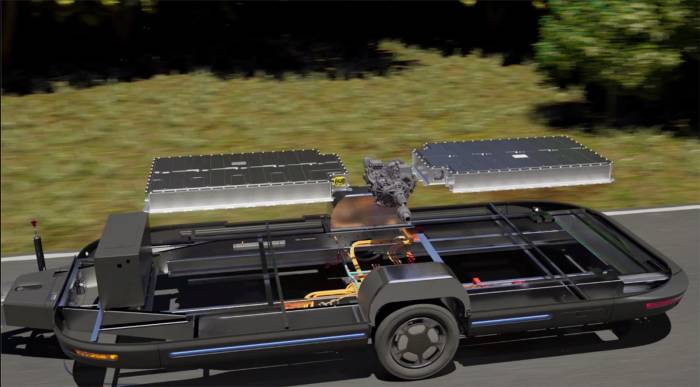 You might get another eye-opening clue if you see the eStream unhitch and move under its own power. The prototype is the result of a year-long program partnering Airstream and its parent, Thor Industries, with Germany’s ZF, using an electrified platform developed by the automotive supplier.

That platform contains twin 40-kWh lithium-ion batteries and a plug-in hybrid drivetrain. When hitched up to a trailer, the 5,500-pound eStream can provide additional propulsion, easing the burden on the tow vehicle. That translates into better mileage.

It offers several other advantages, such as torque vectoring, which helps navigate tight corners, and stability control to keep things running straight and true, even in heavy crosswinds.

Unlike the fully self-propelled Winnebago e-RV that also debuted at the RV SuperShow, you can’t take the eStream out on its own. It needs a tow vehicle on the open road.

But, when hitched up, it acts almost like a hybrid extension of that tow vehicle, adding some propulsive torque. And then, eStream can recover energy during braking and coasting, sending it back to the batteries.

When you reach your destination, one of the real benefits of electrifying the trailer comes into play. The eStream can automatically hitch or unhitch.

And once cut loose, it can move — slowly — under its own power. The user can then guide it around a parking lot or campground with an app on a smartphone or tablet.

“You may never have to back up a trailer again,” said Wheeler, acknowledging that this is one of the biggest challenges RVers face, even veteran travelers.

“Relationships are made or broken backing up a trailer,” joked McKay Featherstone, Airstream’s head of product development. 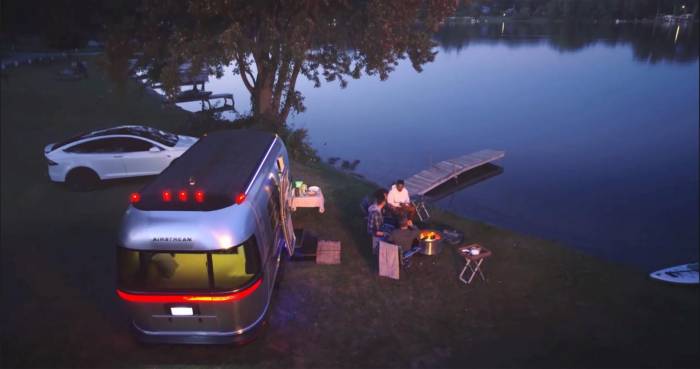 Once parked, the eStream is completely self-sufficient from an energy standpoint. It uses an electric heat pump for power and an induction stove for cooking.

The trailer can be plugged into a power line at a campsite. But it also can also run “off the grid and power everything,” including air conditioning, “for well over a week,” added Featherstone.

Actually, it could run even longer than that, thanks to the solar roof. Under optimum conditions, it can deliver 900 watts of current. Airstream even designed the trailer so that a user could connect even more solar panels if desired. 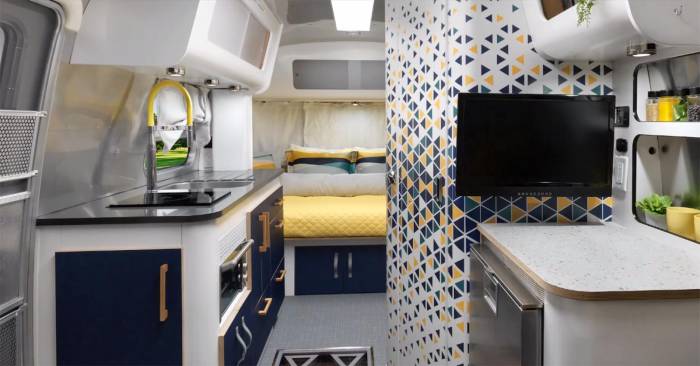 Meanwhile, the eStream offers Vehicle-to-Load capabilities. “We can export power,” Featherstone noted, “including powering your home” in the event of a blackout.

Charging up the eStream is easy, he added. It can plug into a conventional 240-volt charger and go from a fully drained battery to a 100% charge overnight. Connected to the latest high-speed public chargers, meanwhile, it should take under an hour to get the pack up to an 80% charge. 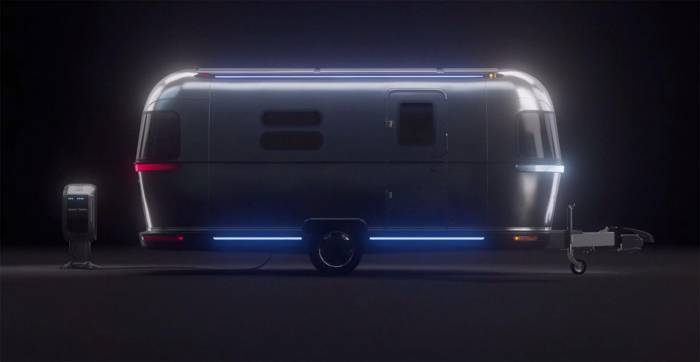 According to CEO Wheeler, Airstream sees a number of potential customers for a production version of the eStream, including early EV adopters and those who place a high value on sustainability. He also said it should appeal to those who don’t want to be limited to campgrounds for power and who would like to spend extended periods off the grid.

For now, Airstream has no intention to produce the eStream. But the two company executives did little to downplay their interest in bringing something similar to the market. The plan is to use the concept to test out market demand and see what features appeal most to potential buyers.

“We swung for the fences here,” said Wheeler. “It’s loaded with features. Not everything is going to make sense for every customer.”

The goal is to use that learning experience to come up with a production model — or models — that would be ready in “a couple years,” he added. Initial products “very likely will be produced in parallel with things we make today,” Wheeler said.

But, much like the auto industry, it’s quite possible that electrified trailers will completely replace some existing Airstream models in the not-too-distant future.

Up Next: Winnebago e-RV Gives Us a Taste of the Electrified Camper Future