Winnebago generated plenty of sparks at the Florida RV SuperShow with the debut of its e-RV ‘concept,’ a battery-powered Class B motorhome. And it wasn’t alone.

If anything, electric RVs could be very much a part of the future. But, at least for now, they will require some sacrifice.

At first glance, you’re not likely to notice much that’s different about the Winnebago e-RV, which starts as a modified Ford Transit van. But a closer inspection will reveal there’s no tailpipe. That’s because the Iowa-based manufacturer has swapped out the gas-powered drivetrain for a battery-powered package developed for it by Lightning eMotors.

While the e-RV is officially being described as a “concept,” Winnebago officials did nothing to downplay expectations that a production version of the battery-powered motorhome is already in the works. And it’s all but certain to have plenty of competition in the not-too-distant future.

After a slow start, the transportation industry is going electric  — and fast. And it’s not just sedans, pickups, and SUVs. Interest in all-electric vehicles has clearly been accelerating. It’s particularly true among outdoor enthusiasts.

“The future is electric … in the motorhome industry,” Klaus Rehkugler, head of sales and marketing at Mercedes-Benz Vans, said this past week. Like Winnebago, the German manufacturer has worked up a prototype popup camper version of its new, all-electric EQV van.

For its part, Winnebago is hoping to carve out a leading role. “Consumer demand is driving electric power applications across many fronts,” the automaker’s VP Ashis Bhattacharya said in a statement.

“We believe RV consumers are poised to benefit from the enhanced features and usability that electrified and connected RV products will provide.”

Lower energy costs are, of course, one of the initial benefits of going electric. And early research shows that battery-electric vehicles have fewer breakdowns and lower maintenance costs as well.

Then there’s the ability to maintain power at a campsite without having to either plug in or fire up a noisy, smelly generator. 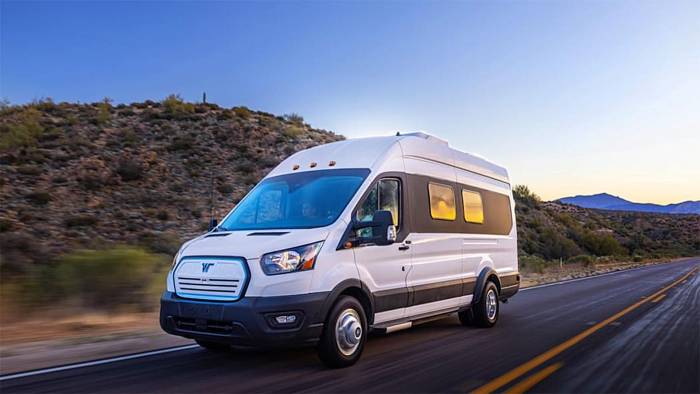 There is one big downside, however. The 86kWh battery powering the Winnebago e-RV can only deliver a maximum 125-mile range. But the company downplayed the inconvenience.

Its internal research suggests that only one-third of its owners normally travel more than 300 miles. A full 54% normally travel less than 200 miles. A sizable share, it seems, use motor homes as a “base camp” when they head off to the beach or some other nearby destination.

For those who do want to travel farther, Winnebago says the e-RV can plug in at home, at a campsite, or at a high-speed public charger where it could be ready to roll again in as little as 45 minutes. And a production version could wind up with a bigger battery pack.

Ford itself will offer one with more than a 100kWh capacity when the new F-150 Lightning pickup goes into production in mid-2022. 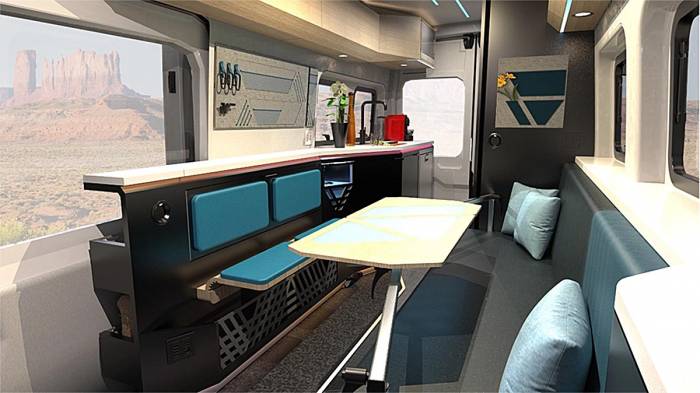 The all-electric e-RV pushes sustainability in a variety of other ways, using materials like rubberized cork and wool for flooring and insulation. And high-efficiency appliances minimize energy demands that would further reduce range.

But it’s still a classic Winnebago campervan when it comes to features like its kitchenette, sleeping quarters, and standup shower.

The Florida RV SuperShow is an annual showcase that has a record of revealing near and long-term trends for the recreational vehicle industry. It’s an industry currently enjoying a boom in sales driven by the COVID pandemic.

And, not surprisingly, Winnebago isn’t the only manufacturer looking forward to an electrified future. 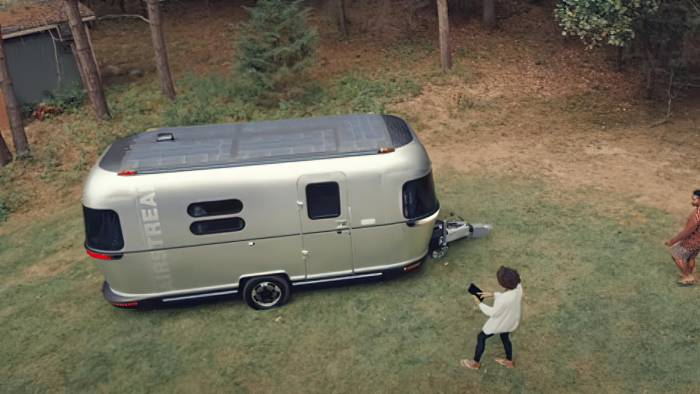 Thor Industries’ Airstream offered up a unique take with its eStream trailer. Though not self-propelled like Winnebago’s e-RV, it does feature a twin-motor electric drive unit that, paired with a tow vehicle, operates almost like a hybrid. The battery-powered system kicks in some of its own power and recaptures energy normally lost during braking or coasting.

At a campsite, unhitched from its tow vehicle, the e-Stream can be remotely maneuvered into a spot using a smartphone app. Basically, you have a remote-controlled camper trailer, which you can now park in places no trailer attached to a tow vehicle could ever imagine getting into.

And RV fans can look forward to plenty of other electric concepts — and, eventually, production vehicles. Mercedes is suggesting it may soon offer that popup version of the EQV van.

Volkswagen has similar ideas in mind for the stretched version of the ID.Buzz electric Microbus, set to debut in the U.S. in 2023. And Nissan has hinted at an all-electric campervan as well. Still, other traditional RV manufacturers are expected to follow over the next several years.

Saving…
‘Stealth Studio’ One-Ups Van Life Trend With Apartment Truck
Back That Camp Up: Park the Airstream eStream Trailer With Your Phone
×