Electricity in the outdoors has become commonplace in recent years, with solar panels and portable battery packs now fixtures of the modern campsite. But despite quieter, cleaner options, for big jobs you still need the power of gas. 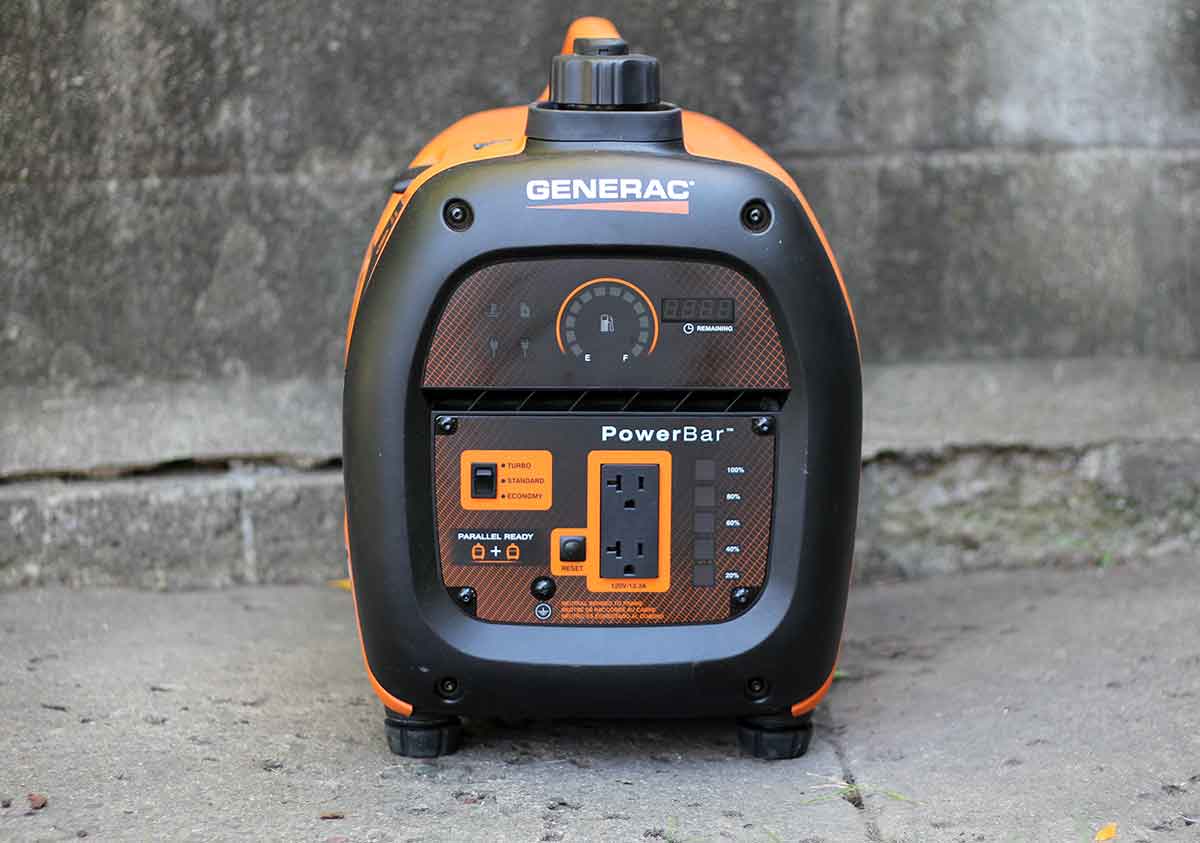 A new entry this fall in the gas-generator market, Generac introduced its iQ2000 model as “a smart, powerful generator without all the excess noise.” I tested it out this week.

Generators have a bad image with some campers. Older units are loud, exhaust-spewing contraptions that can wreck the peace at a park. Though the Generac is not silent, its engine hum is relatively benign, quieter than most idling cars.

The Generac offers a pair of 120v plug-ins just like you get at home. It’s able to output 1600 watts while running, which is enough to power small gadgets to big appliances. See note on limitations below.

Operation is easy — you pull a starter cord and adjust the throttle dial as it comes alive. LEDs on the front give an interface for assessing power usage, maintenance issues like low oil, and available electricity with the remaining fuel.

Its max capacity, just more than a gallon of gasoline, will give hours of run time, depending on the device. A digital clock on the generator’s face counts down the hours and minutes as the fuel is used by the 4-stroke, 79cc engine.

I tested it on multiple power-hogging products, including a large appliance, lights, and an electric saw. It handled any small electronics product with ease.

The engine jumped and required “turbo” mode to power a full-size refrigerator. But after some adjustment, with the engine revving and then calming down again, the Generac was able to output a steady flow of current for the fridge to keep it operating without pause.

As an extreme test I plugged in a circular saw. Some old framing lumber in the yard needed to be dispatched, and the saw would do the trick.

But, alas, the spinning blade in hardwood was too powerful for the Generac — it sputtered and shut down, maxed out.

Tools such as a sander, circular saw or drill press can easily draw 1800 watts or more, so if you’re planning repairs at the cabin, be sure to look at the specs of your tools when shopping for a generator. For my circular saw, this little guy just won’t cut it. The brand makes more powerful generators for work sites and heavy use.

Granted, in the woods camping, that kind of tool will rarely be used. Everything else I plugged in was easily managed by Generac’s gas-to-electricity machine.

Overall, I was happy with the performance. My past experiences with gas generators have been loud and exhaust-ridden.

You can certainly smell the Generac’s fumes, but set 20 feet from a picnic table the little unit, especially on the other side of a car, is an unobtrusive power source.

Generac is headquartered in Wisconsin, and the iQ2000 is made in the USA. It comes with a three-year warranty and a $799 price tag — getting you more watts for the dollar than a venerable Honda, whose 1,000 watt EU1000i rings in for $950 retail.

Measuring about 20 x 12 x 17 inches, and weighing about 45 pounds, the Generac is manageable for car camping or use anywhere you can get with a truck or car. It’s a great backup to keep at home in the garage, too, in case your grid goes down.

Up Next: Boeing Introduces ‘Lightest Metal Ever’