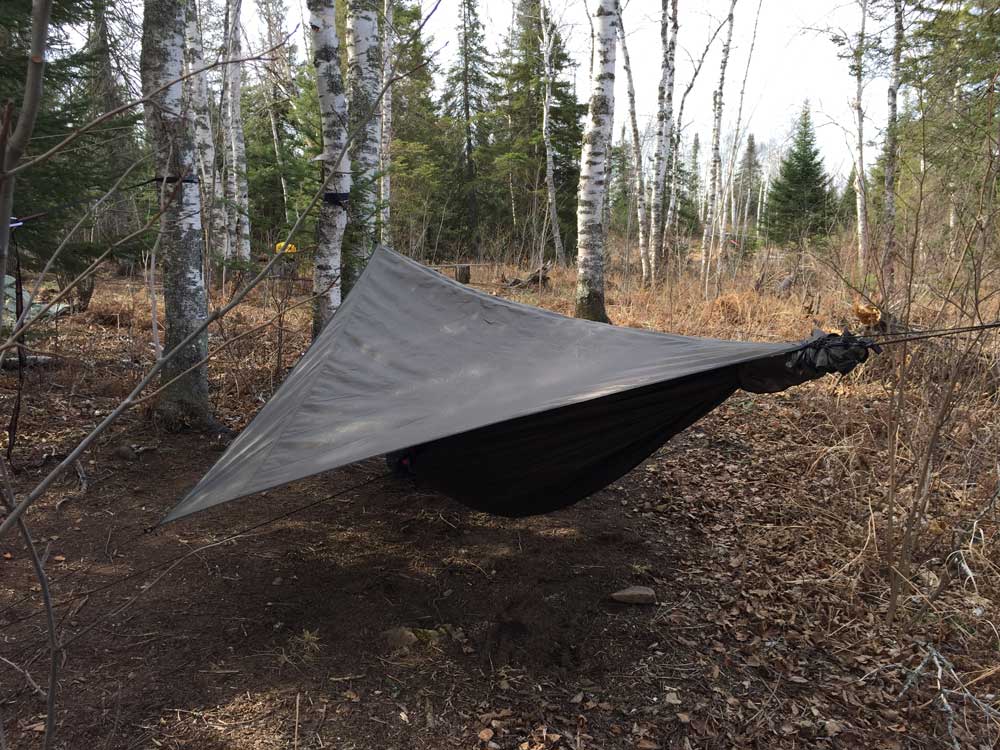 We didn’t have any trips planned to Borneo, so I took a Hennessy Jungle Explorer Zip hammock to the mosquito-infested woods of Minnesota to test.

Designed for jungles and made to stay dry in rainforest deluges, it exceeded all my expectations in the field. The tricked-out hammock sets itself apart from the competition.

I grabbed the Jungle Explorer hammock for a last-minute backpacking trip in northern Minnesota. That meant breaking a cardinal rule of backpacking: Test your gear before a trip.

Setting up any hammock comes with a learning curve, and the Hennessy was no different. It took a few failed attempts in the dark to get it strung properly.

Setting up this hammock requires knot-tying. I hastily followed the directions and ended up with something that worked.

Once set up, I could tell Hennessy knows hammocks. It includes step-by-step instructions on how to get into and lie in it — a bit excessive perhaps, but I appreciate the effort to make sure I have all the info I need. 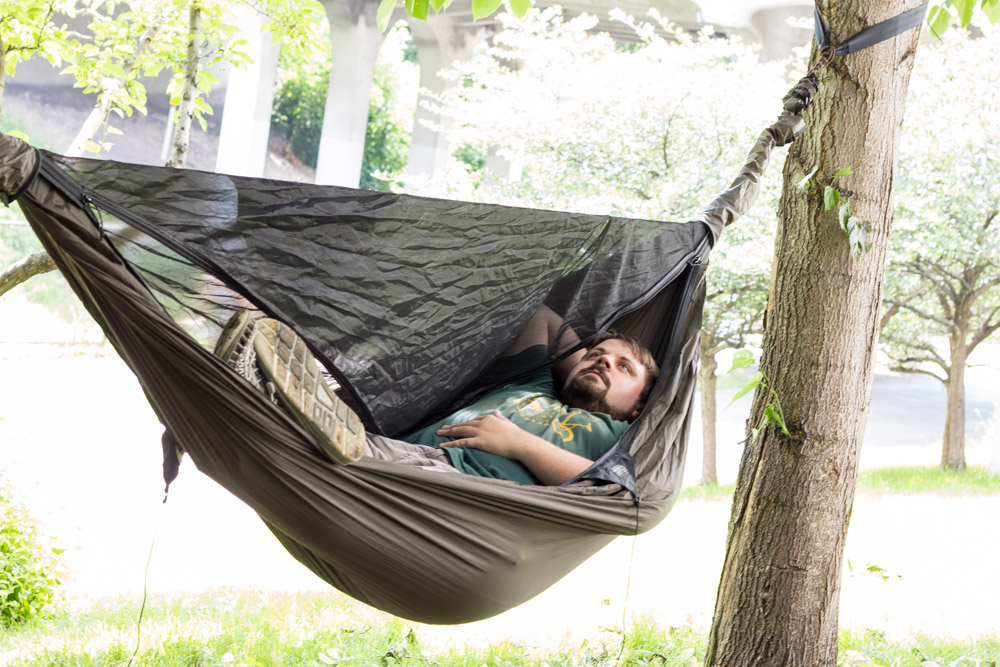 I became proficient setting up the hammock and could be bed-ready in 10 minutes or less. With quick-release knots, tear-down was a breeze taking just a few moments.

The hammock is designed with what the company calls a “ridgeline.” This is a length of cord that runs from each end of the hammock and creates a ridge above the sleeper. It suspends and opens the bug net and rain fly, and it helps prevent the claustrophobia that sometimes accompanies hammock sleeping.

This thing is roomy! It fit my 6’1″ frame better than any other hammock I’ve used. I could stretch out diagonally and still have extra room.

Suspension: The Jungle Explorer hammock comes with a pair of 2-inch “tree hugger” webbing straps that are 42 inches long. They wrap around the tree, and the 10-foot support ropes passes through the loops on each end. A knot is required to secure the rope.

The Pad: Insulation comes in a double-sided, heat-reflective bubble pad. It slides between the bottom layers of the hammock and clips to rings so it stays put all night.

It is tapered, which ensures it’s wide enough at the shoulders and hips. This eliminated the notorious cold spots that occur when using a regular sleeping pad.

The hammock is comfortable without the sleeping pad if you don’t want to haul it along, but you will get cold more easily.

The pad is rated to 40ºF. In a 25º sleeping bag with medium-weight long underwear, I survived until about 3 a.m. when it hit about 40º one night this past spring.

At that point I woke up with a chill on my back. The 40º rating is a little generous unless you’re a warm sleeper. For me, 50º is a more reasonable rating.

Bug Protection: The integrated mesh zips shut to keep bugs out. It was essential for my trip in Minnesota.

The aforementioned sleeping pad also deters bugs, and the heavy-duty, double-layer nylon prevents bugs from bitting through the hammock. The netting does cut down on airflow, so it got a little hot and stuffy at times during summer nights. 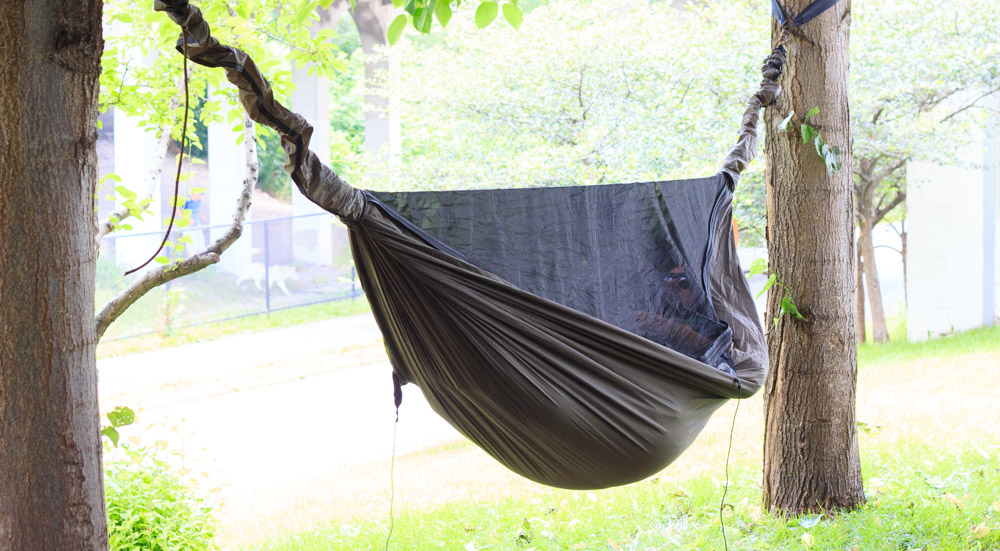 The Fly: An asymmetrical rainfly is easy to set up and effective in moderate rain storms. If the hammock is already up, it’s simple to attach the fly. It lays over the ridgeline and clips to the suspension. 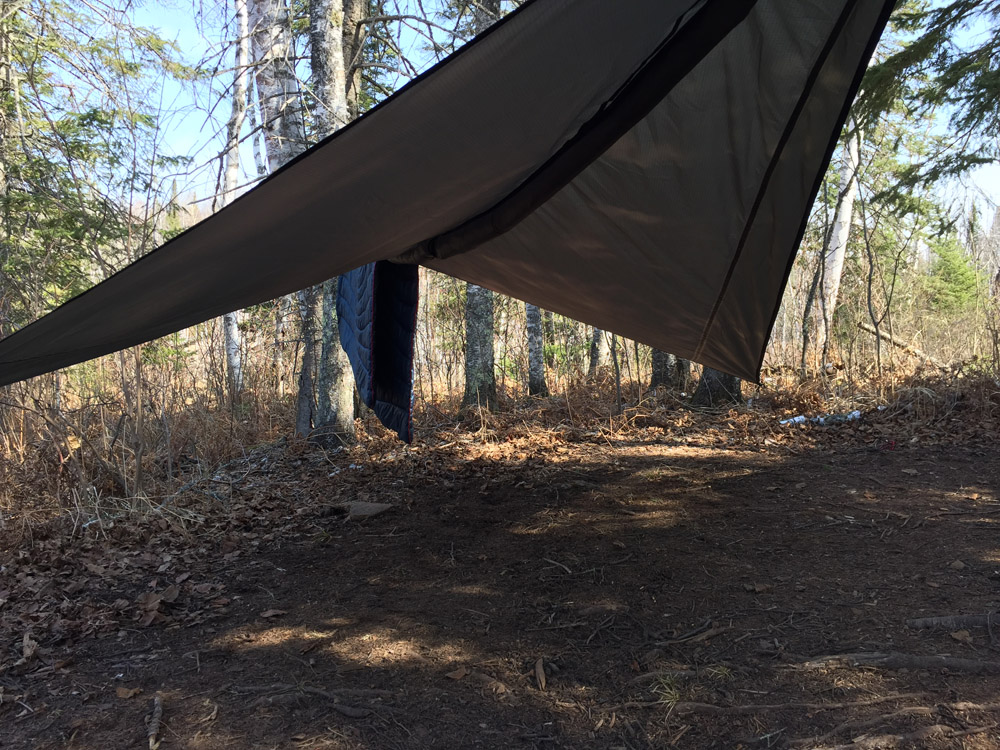 Knowing a few knots speeds up the process. My favorites are the siberian hitch and quick-release truckers hitch for the ridgeline, and the taut line hitch for the guy-outs.

The Snake Skins: They seem a little odd at first as I’m used to seeing hammocks pack into ball shapes. But the “snake skin” storage sacks are slick.

The snake skins (included) are two nylon tubes that slide over the hammock and bug net. They make packing and unpacking the hammock a breeze. All you have to do is slide the nylon tubes back in either direction to reveal the hammock. It also allows you to stow the hammock during the daytime and hang out under the tarp.

Water Collectors: The Jungle Explorer comes with two water collectors. They attach to your rainfly and a water bottle, allowing you to gather water while you sleep. 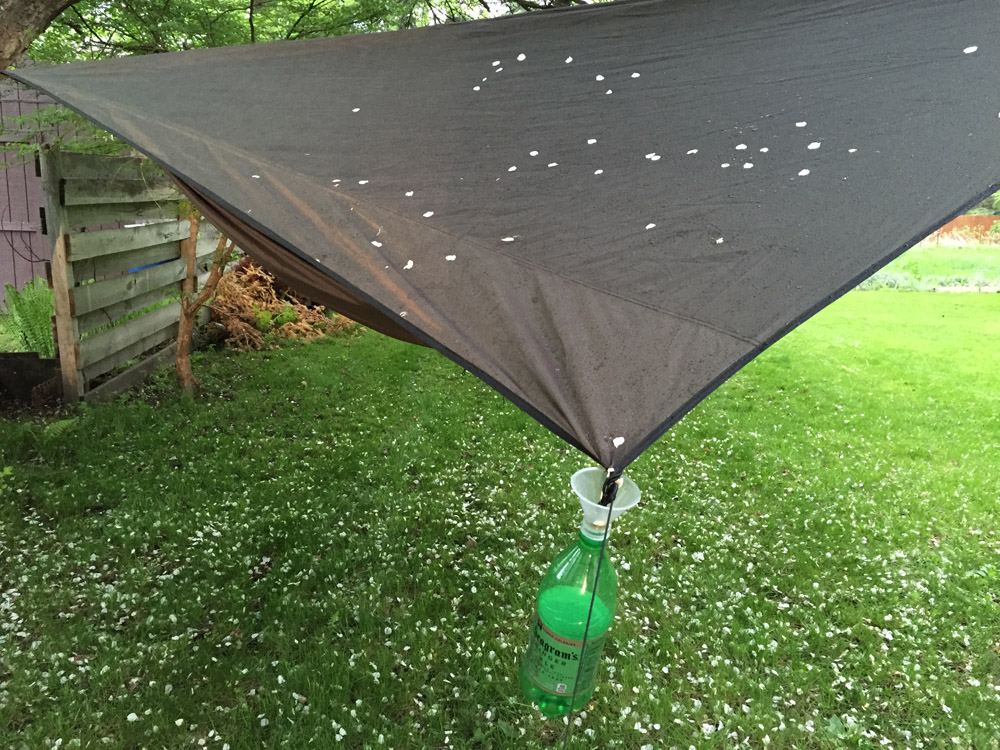 The 42” straps that come with the hammock are too small for some trees. You can still use them on bigger trees but the rope could mar the bark. The 30D no-see-um mesh clouds your vision more than other bug nets on the market.

You do need to know a few knots for setup, which might excite or deter potential buyers.

All those features come with added weight. The packed weight of the hammock is a little shy of 5 pounds. If you’re looking for an ultralight option, skip the Jungle Explorer.

Who Should Buy It

An experienced hammock camper who is looking for an all-in-one shelter and doesn’t care about a little extra weight.

Don’t need the XL version? The Jungle Expedition is the same but smaller, lighter, and less expensive at $260.

Up Next: Hammock Virgin: My First Time Was An Accident

Saving…
Hammock Virgin: My First Time Was An Accident
You Know You Want A ‘Hot Tub Hammock’
×