Home » Climbing » Fueling a Record: How Honnold Prepped for ‘The Nose’

Earlier this month, climbers Alex Honnold and Tommy Caldwell set the speed record up The Nose of El Capitan in Yosemite National Park — twice in a week.

We got in touch with Honnold, 32, to learn more about the methods he and Caldwell used to scale The Nose faster than ever before.

GearJunkie: What was the key to you and Caldwell breaking the two-hour barrier?

Alex Honnold: Practice! I think the main thing was us doing it many times and consistently refining our technique, both for the physical climbing and all of the ropework/strategy. We tended to shave a few minutes off each time just from feeling more familiar with the route.

Did you feel you sacrificed safety at all to attain such a fast time up The Nose?

No, not at all. We considered safety to be non-negotiable; there were certain safety standards that we weren’t willing to compromise.

Are you worried other climbers may push themselves into dangerous territory to try and beat your time?

I hope that someone breaks our time eventually. I think that it’s probably possible to climb the Nose in 1:15 if someone was truly running uphill. But I hope that whoever does it takes the time to prepare and do it safely. I’ll be inspired by someone going faster. I just hope they do it thoughtfully. 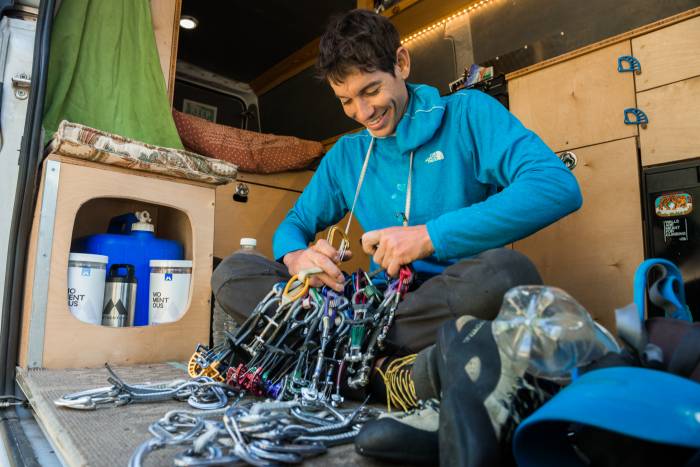 How do you train for an effort like this?

Actually, neither of us was particularly well trained for this record. We’d both been mostly focused on smaller climbs beforehand. I’d been mostly sport climbing, and Tommy had been on a family bouldering trip in Europe.

But we both gained fitness on the route itself. We knew that it would take many laps up The Nose just to learn the strategy and the gear so, we used those laps to gain the fitness that we needed.

Do you eat or drink during a speed climb? If so, what the heck is fueling these feats?!

I eat a normal breakfast ahead of time (or a slightly lighter breakfast as we started going earlier and faster), so I eat muesli and fruit ahead of time. Then I drink a fair amount of water at the base before we start climbing. Then on route, I eat a few energy blocks (doesn’t really matter the brand, just gummy sugar cubes) and drink whatever water I can find.

Aid climbers often bail and leave their water behind, so there were a few stashes that I was consistently using. But basically, while we climb I eat about 100 calories of sugar and chug water on one ledge.

What techniques did you use during the climb?

We mostly simul-climbed, which just means climbing at the same time. And then at the top, I did a lot of short fixing, which means pulling up the extra rope so I can keep climbing while Tommy jumars the pitch below. Those are both very standard speed climbing techniques.

We’re all watching you. But what climbers are you watching these days?

Brad Gobright and Jim Reynolds are both great Yosemite climbers who are pushing pretty hard right now. They’re motivated and hungry. They just did the Triple — Mt. Watkins, El Cap, and Half Dome — in a day.

Honnold on Getting Older and Eating Better

Do you notice a change in performance when you have good or bad nutrition?

Personally, I think that for most elite athletes nutrition only contributes a small percentage to total performance, but when you’re starting to get near the limits of your physical potential, a small percentage starts to matter a lot more.

What is the one food/drink that really messes you up?

I’m pretty sure that I’m lactose intolerant so milk and cheese definitely mess me up a bit. But otherwise, I don’t think I have any particular dietary issues.

What do you avoid before a big climb?

I just try to stay on my normal routine — normal foods and a normal amount of sleep. I want big climbs to feel a lot like an average day. 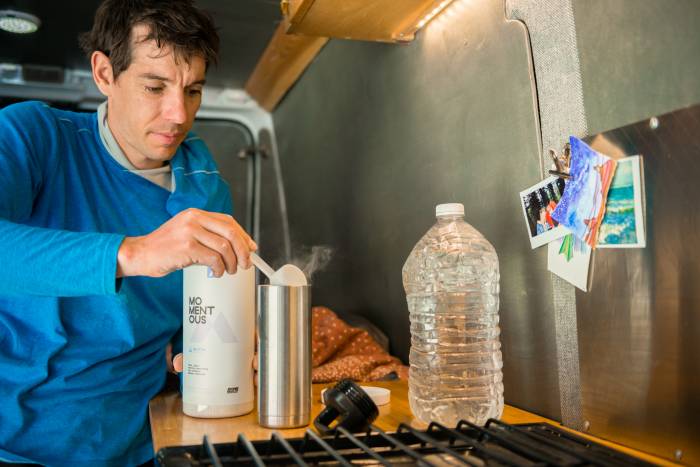 You’re a new investor in supplement Momentous. What made you want to make a bigger commitment to this product?

I’ve been using the product for a while, and it definitely works for me, which is sort of the most basic step. I appreciate the clean, high-quality recovery products that Momentous is producing and wanted to get involved. I think that Momentous has a great opportunity to really contribute to the recovery space, and I want to participate.

I haven’t had any stomach issues with the whey protein in Momentous, though in general I prefer to use the plant-based samples (coming to the public this summer).

Speaking of plants, is that something you are focusing on more in your approach to nutrition?

I went vegetarian around six years ago. And in general, eating lots of fruits and vegetables makes me feel good and healthy. So it’s easier on the planet and good for my health.

How has your diet changed during your evolution as a climber?

I’ve put more effort into diet as I get older (and have more money). In my early 20s, I was a total dirtbag who ate cheap, unwholesome food and regularly binged on desserts. But I was young enough that I could climb every day regardless of what I ate.

A decade later I’m starting to notice my recovery a little bit more. I now put more thought into what kind of world my food choices are creating. Basically, as I’ve gotten older I’ve started trying to eat better.