A 400-foot cliff, Alex Honnold dressed in a wig, a heavy-metal band… and all the lights and flashy camera angles of a Hollywood Blockbuster. Welcome to climbing’s the latest viral video. 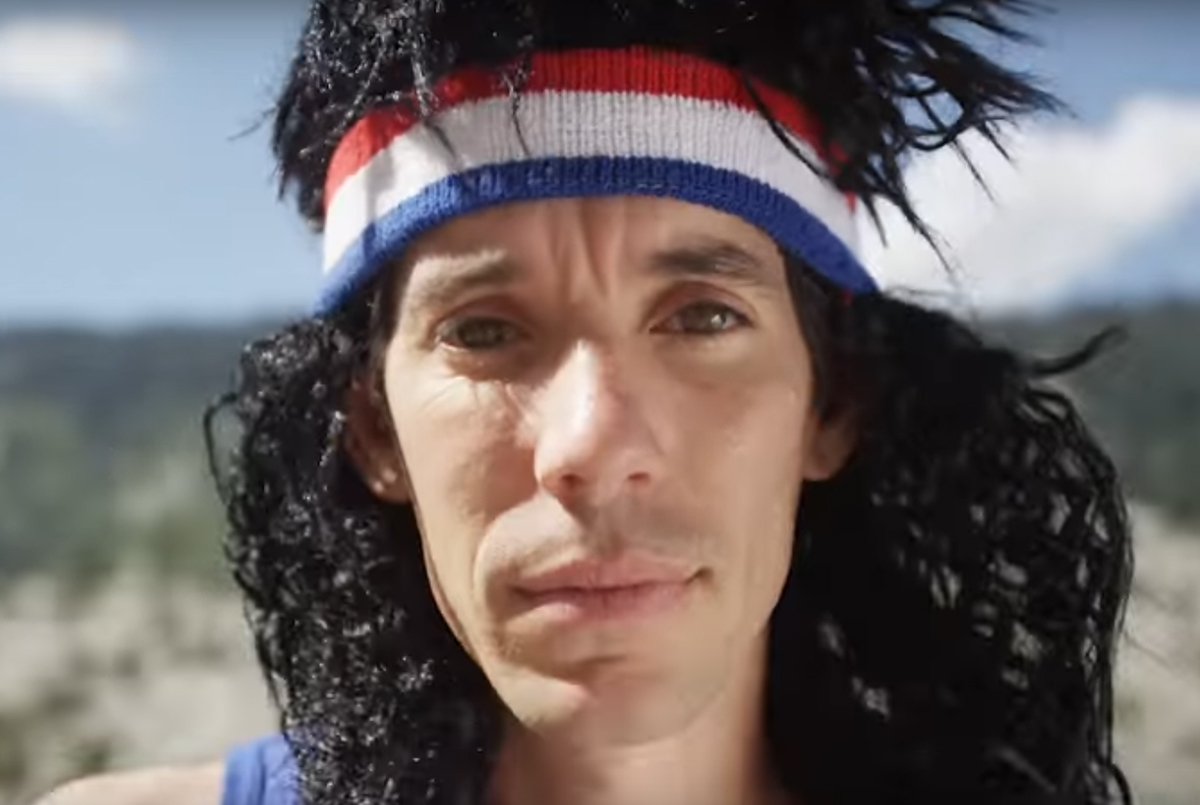 The video also happens to be an ad, titled “Stride Health: Alex Honnold Solos Lover’s Leap in Dan Osman Tribute.” Honnold, who is among the world’s best climbers, is sponsored by Stride Health, an insurance company.

As far as “branded content” goes, this one was a success. Honnold climbed without a rope, defying death, and the video has racked up hundreds of thousands of views and aggregation across the outdoors media and beyond.

It’s well done. The video is funny, and the climbing is remarkable.

But we’re worried it sets a bad example. Free-soloing by the inexperienced is obviously dangerous. Every year, people die while climbing at crags large and small in the U.S. and beyond. They are often un-roped, and they may have never learned the basics of technical rock climbing.

Those are the people this video hopes to reach by the thousands to promote an insurance company.

In the video (watch it above) Honnold suits up in the costume representative of Osman’s era and sets out to beat the speed record for a climb at Lover’s Leap in California.

It was in tribute to Dan Osman’s classic climbing feat, as seen in the Eric Perlman film, “Masters of Stone 4: Pure Force.” The route, “Bear’s Reach,” is a sheer, 400-foot moderate climb, rated at 5.7.

Spoiler: Honnold beat Osman’s record, with a time of 4 minutes and 15 seconds. It’s a remarkable physical endeavor to be sure, but one that when back-dropped by the drama of this video left a weird taste in our mouths.

Climbers know that free soloing is dangerous and not to be taken lightly. But nothing in the video reminds non-climbers of this fact.

It should be common sense that free soloing is dangerous. But it’s important to remember that just this year people tried to “save” a baby bison by putting it in their car (it had to later be put down). Another man died trying to soak in boiling hot springs in Yellowstone. His body was never found, dissolved by the acidic cauldron.

People do dumb things when they don’t know better, and this video does nothing to explain that this silly dude in the floppy mullet wig happens to be one of the best rock climbers in the world.

So, how will that 16-year-old neighbor boy who’s doesn’t know a climbing rope from braided hemp twine respond to the video? Will he go out to a local cliff and try to send it, unroped, all the while imagining a rock band playing at the summit (as is portrayed in the video)?

Probably not. Hopefully not. But we’re worried that conclusion is all too likely.

Osman set the speed record in the 1990s with a time of 4 minutes and 25 seconds. I was utterly shocked at the footage, and seriously impressed. Osman jumps and employs aggressive climbing moves the whole way up — with no rope.

One slip and he would die. Osman later did die under similar adrenalized circumstances during a massive “rope jump” in Yosemite in 1998.

But while the original Osman film was a segment of a film, sold on VHS tape and later DVD and intended for a core audience of serious rock climbers, this advertisement is intended for a broad audience online.

It’s been viewed 181,000 times already. How many of those viewers know anything about climbing? It’s impossible to tell.

Free soloing sometimes results in death. Skilled rock climbers know this. Free soloists know this, and take it into account. But the video does nothing to explain this to the legions of non-climbers looking on. They don’t know who Honnold is, and to them, this might seem like a reasonable way to approach rock climbing.

For the record, for the vast majority of climbers, it’s not.

Climbing the 5.7 for Honnold is a figurative walk in the park. He is simply one of the best rock climbers around.

He has soloed 5.13b routes and sport-climbed as difficult as 5.14. For non-climbers, the difference between a grade 5.7 and 5.14 is so vast they can barely be compared. A 5.7 is doable by almost any physically fit person with a rope and proper training. But 5.14 is near the pinnacle of the sport, a difficulty so hard it’s attained by only a tiny percentage of the most elite rock climbers.

But even a 5.7 free solo can have grisly outcomes.

Why Do Climbers Free Solo? In A Word, Freedom

Free soloing isn’t well understood in the general public. There are countless interviews with Honnold where he attempts to describe what he does to people who have no climbing understanding. He speaks of risk versus danger. Honnold largely does not perceive what he does as risky — for him.

But the Stride-sponsored video doesn’t really line up with Honnold’s past descriptions of free soloing. It also is unlike free soloing as described by other climbers.

A rope, harness, gear exchange, and partner communications are tedious. These tools detract from the experience of moving on a wall of rock, but make it largely safe.

Free soloing, while more risky, is exactly what it sounds like. Free.

Honnold described the experience from a “60 Minutes” interview as “slow, controlled, and mellow.”

From a National Geographic interview, when asked “do you think what you do is dangerous?” Honnold responded: “What I do is very high consequence, but I don’t think it’s particularly risky. The odds of me actually falling are very low.”

High consequence has a very different meaning than risk or danger.

The result is a meditative, enjoyable, and rewarding climbing experience. However, the Stride video altered the reason for soloing from “deliberate climbing” to “climbing as fast as possible,” and doing it costumed in a cheeky salute.

Dan Osman’s original climb, as seen in “Master’s of Stone” was viewed as defining the limits of human ability (and insanity?) in the 1990s. A hunched posture, dyno-ing and sprinting up a 400-foot cliff face is not the average day at the crag.

My jaw still drops after having watched it at least a dozen times. He set the record at 4 minutes, 25 seconds, one that I never suspected would be broken. And then there’s Alex Honnold.

The Stride Health video pays tribute to what Osman did, and Honnold respects the climber and the record. But we hope it doesn’t set a new precedent.

We greatly respect Honnold and what he’s done to grow the sport of climbing, but in this instance, he and the production crew behind this video make risky behavior look casual. It would be too easy for amateurs (or psyched-up experienced climbers, too) to get in a pickle trying to copy these antics.

Up Next: Top Of Its Class: Petzl SITTA Review