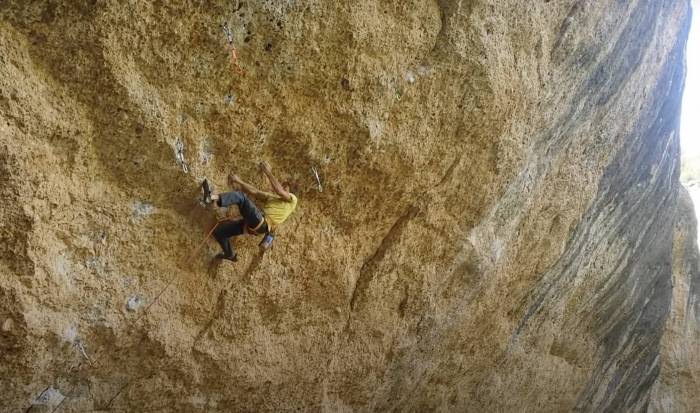 Megos on the send of 'Perfecto Mundo' at Margalef in 2018.

The now-grown-up wunderkind from Germany flat-out rips at Margalef. Four years after establishing the area’s most challenging route, Megos returned for more.

In a cathedral of conglomerate epics, Alexander Megos’ “The Full Journey” (5.15b/9b) could be the pulpit. The 29-year-old put the finishing touches on the two-pitch route on Oct. 9. Simply put, it quests out a huge yellow roof at a wild, steep angle.

Even with Megos’ preternatural strength and stamina, he knew the big rig wouldn’t surrender easily.

“I knew piecing the first and second part together would not be easy, despite the very good rest at the anchor of the first pitch,” he wrote on Instagram.

“On my first day back in Margalef last week, I could get a repeat of the first pitch, but to actually add the second part, it took 6 more days of trying,” he wrote.

British climber Tom Bolger, who now lives in Margalef, first bolted the line. Megos said he was eager to feel out the product of Bolger’s vision during a visit to the area this April — but he ended up a day late and a dollar short. Megos left the country the day before Bolger hammered in the last bolt.

Evidently, having secured the bolter’s blessing, Megos leaned right back into it this past weekend. He described its character and movement with an institutional vocabulary.

“The first part is pure power endurance on mostly two-finger pockets with a hard mono move in the middle.

“The second part is a boulder with a rather violent dead point move to a mono and a few more hard moves after,” he wrote.

If you want to see what climbing at Margalef is like, check out the “Perfecto Mundo” 5.15c uncut send video. Spoiler alert: hard for long.

Megos noted that a good rest between the first and second “parts” (or pitches) of “The Full Journey” proved vital to his ability to complete it in a continuous effort. Then, in accordance with the style these days, he offered a caveat to his assessment of its difficulty.

We doubt any of that bothers Megos. You’ve got to tap into focus bordering on airtight to climb anything this long and this steep — let alone this damn hard. 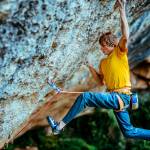 It took the carrot-powered climber less than a total of 9 days to get the first redpoint of a route that Chris Sharma bolted 10 years ago.   Read more…