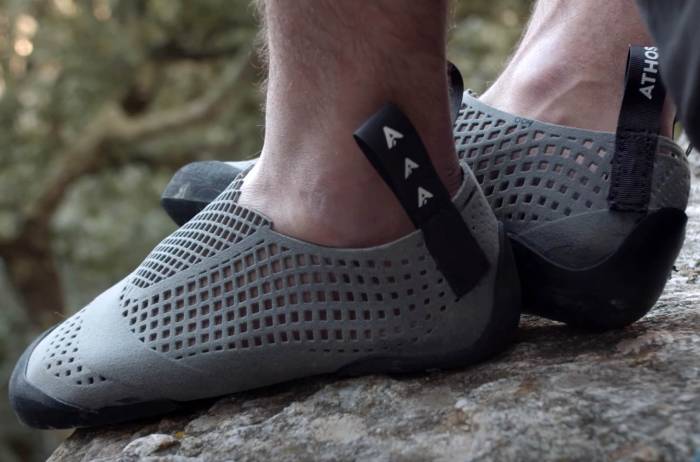 Athos will offer their 3D-printed climbing shoes in multiple styles and colors; (photo/Athos)

The Spanish company offers a personalized process that uses digital scans of feet to create a 3D-printed shoe tailored to individual needs.

Athos wants to see photos of your feet. But, don’t worry — it’s for science.

This Barcelona-based startup not only created the first 3D-printed climbing shoes — it will also make them specific to each customer. Just scan your beautiful naked feet with a smartphone and choose a design. The company plans to ship a pair of tailored climbing shoes ready for the crag.

“If you have ever climbed, you will know that climbing shoes are really uncomfortable,” Athos says in a promo video. “They need to go really tight to the feet in order to have a good performance. Almost all climbers use two, three, or even four sizes smaller for their climbing shoes — which hurts a lot.”

For that reason, modern climbing shoes can feel slightly masochistic. In the U.S., rock climbing emerged from a DIY 1960s counterculture. Royal Robbins and company just wore tennis shoes. But as the sport progressed toward more challenging routes, climbing shoes took on the philosophy of ballet: the tighter, the better — no matter the pain.

With climbing shoes that aim for both performance and comfort, Athos wants to update the narrative.

It began as a student project at Barcelona’s ELISAVA School of Design and Engineering. Those students eventually joined with online 3D-printing service Sculpteo and corporate giant HP, which created the Multi Jet Fusion (MJF) tech that makes the process possible.

“For the manufacturing of one Athos climbing shoe, you just need to print the body and assemble the rubber and the pull straps,” the company said. “It is a really simple manufacturing process that can be reproduced and distributed all over the world.”

Thus far, Athos has gotten attention for its design. The startup was named a runner-up for the James Dyson Award, an international design competition.

Prices for the shoes were not available at press time. Athos offers an order form on its website, but it’s unclear when the shoes will become available. 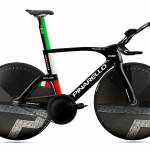 With latest design, Pinarello eyes a future where any cyclist can have a 3D-printed bicycle that's tailor-made for their body type. Read more…