In a just-released three-part series, the legendary crusher and training innovator leads sport climbers through the art of sending.

If you’ve ever set foot in a climbing gym, you might’ve heard the name “Ben Moon” a time or two. He’s the man behind the light-up, soul-crushing training device known as the MoonBoard.

Moon’s brand is about as close to a household name as a specialist can get. But the man himself was a legend long before he dreamt up the world’s first interactive climbing wall.

Moon burst onto the outdoor climbing scene as a lanky, dreadlocked teen back in the early 1990s. Within a couple of years, he’d established some of the hardest boulder problems and sport routes ever. Ahead of his time, he gave the world its first 5.14d: “Hubble” at Raven Tor in Sheffield, England.

Now in his mid-50s, the visionary (and, remarkably, cancer survivor) remains exceptionally involved in the sport. Moon’s new three-part series, “Redpointing Approach and Tactics,” is a testament to the man’s climbing dexterity and endless tenacity. In true no-BS Moon fashion, the title cuts right to the chase.

“Redpointing” applies to roped free-climbing — think sport and trad. It describes the act of climbing a route in one go from the ground to the finish, clipping all the quickdraws without weighting the rope. To successfully redpoint a sport climb at one’s limit usually requires a lot of commitment to practice.

I’ve personally streamed countless hours of climbing content and sampled tutorials by the greats like Camp4 and Neil Gresham. Moon’s series is exactly what I’ve wanted from the genre but could never quite find. His presentation is concise, thorough, approachable. He offers up both theory and technique in a way that should resonate with climbers at just about any level.

Witness the absolute fitness that is 55-year-old Ben Moon pulverizing 5.14+, and learn a bit along the way with “Redpointing: Approach and Tactics: Part One.” For parts two and three, head to the MoonClimbing YouTube channel. 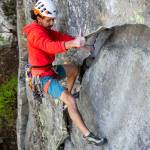