Via ferratas offer a more convenient form of climbing for the entire family without sacrificing adventure. Here are six of our favorites in the U.S., great for cross-country road trips.

You’ve probably seen or heard of Jimmy Chin’s Oscar-winning movie “Free Solo,” chronicling Alex Honnold’s unprecedented ascent of The Nose on El Capitan — sans ropes and safety gear. Some of the best parts of the movie are the sweeping views of Yosemite Valley far below Honnold’s feet. There’s a sense of freedom climbing up rocks — and it’s really good exercise.

The trouble is, technical rock climbing is gear- and skill-intensive. But there’s a safer, more accessible alternative called a “via ferrata.” An Italian term that loosely translates to “iron path,” a via ferrata gets you into spectacular alpine scenery without requiring climbing experience. If you can climb a ladder, you can enjoy a via ferrata.

There are no ropes, knots, or belays. You traverse and ascend steep rock faces but do it while wearing a harness that attaches via two lanyards to a series of half-inch steel cables. If you slip, the short lanyards and cables arrest the fall. Where there are no rock ledges to grab or step on, you’ll find steel hand and footholds drilled into the rock — exactly where you need them.

Consider via ferratas “gateways” into the vertical world. You’ll get a multipitch experience that’s accessible for people of almost all ages. (Generally, depending on the guiding service, kids need to be over age 10 for liability purposes.) In many ways, via ferratas are more like real rock climbing than any indoor gym.

To be sure, there are breathtaking via ferratas the world over, but the U.S. plays host to plenty of remarkable routes. Here are six that top our list.

Best Via Ferratas in America

The idea of pre-protected, manmade routes through mountainous terrain is not new. Anasazi, Inca, and Mayan civilizations all carved footholds and built ladders to access caves and cliffs.

By the 1840s, early mountain climbers in Europe were building “tourist” paths up mountains using fixed ropes, pitons, manmade handholds, and even carved steps. In World War I, Italian and Austro-Hungarian armies used the system of steel cables and iron foot- and handholds to move soldiers through the rocky limestone cliffs of the Southern Tyrol area of the Dolomites.

While there are at least 2,000 via ferratas in Europe, the number in the U.S. is much smaller. However, new public lands regulations (and better safety equipment) have allowed ski resorts and other land managers to develop these iron paths. Now there are via ferratas in Oregon, California, Colorado, Wyoming, West Virginia, and Kentucky.

And right now, a new via ferrata is being established in Ouray, Colorado, paid for and installed by the local community. In Europe, it’s not uncommon for people to own personal safety equipment. But in North America, it’s more common to hire a guide who provides the necessary gear. All you need to bring are sturdy, stiff-soled shoes, a small daypack for water and snacks, and a sense of adventure.

We like Waterfall Canyon for its well-designed routes that utilize a lot of natural rock features along with manmade hand- and footholds. Three separate via ferrata routes are high in Utah’s Wasatch range, close to the mountain town of Ogden. 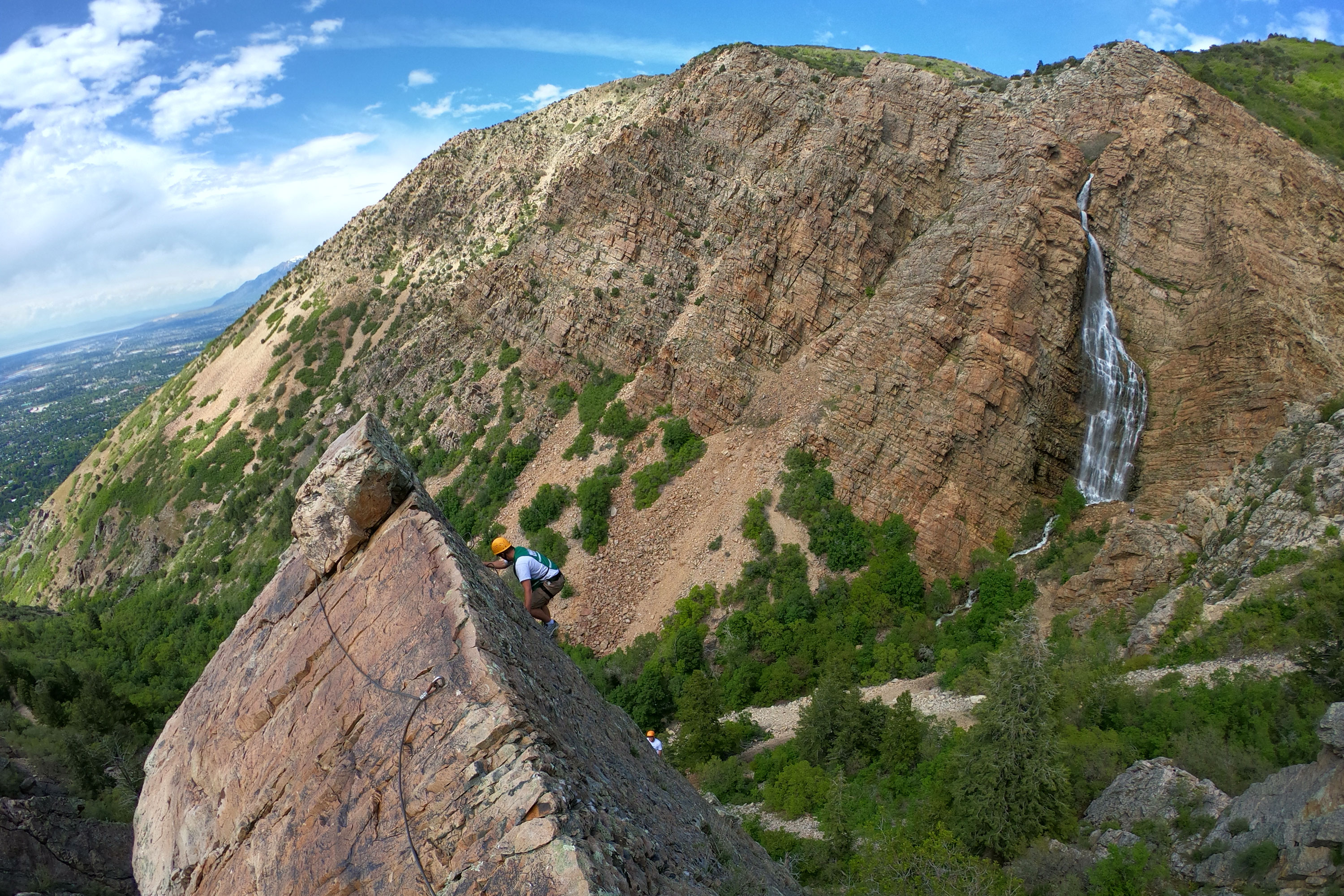 It’s no surprise this is one of most fun via ferratas in the country. Landowner and chief guide Chris Peterson hired world-renowned alpinist Jeff Lowe to help him develop the area. The rock is a climbing-friendly quartzite, and each “pitch” has between 350 and 435 feet of vertical gain. The routes are so much fun that even seasoned rock climbers bring their sticky-soled shoes and attempt to ascend them without using the manmade hand- and footholds.

Group rates start at about $110 per person. Book through Utah Adventure Center.

Red River Gorge is known as a climber’s paradise. The pocketed sandstone that forms the canyon walls makes you think Mother Nature must be a rock climber. In 2001, the owners of the Torrent Falls property decided there was a market for family-friendly climbing options. They hired French experts who helped them build more than three-quarters of a mile of protective cables and holds traversing a 3,400-foot horseshoe-shaped section of the canyon.

Beta: A 70-foot-long bridge and a platform 120 feet off the deck provide a bird’s-eye view of the gorge. For $52, you get a day pass, gear, and instruction to explore six different sections of the 3,400 feet of varying difficulty. Once you master the easier routes, you can bump up the adventure quota. Learn more here.

This privately owned via ferrata in West Virginia provides expansive views of the Allegheny mountains. You can see the summit of Spruce Knob (4,863 feet, West Virginia’s highest point) and the historic Germany Valley, home to some of the neatest limestone caves in the country.

The via ferrata ascends two fin-shaped quartzite outcrops. It’s a short hike to the base of the west fin, where you climb 200 feet to a ridge and traverse along solid ledges. The two outcrops are connected by a suspension bridge, where you dangle high off the ground as you cross to the east fin. The route gets steep here, but there are plenty of natural and manmade hand- and footholds to help along the way.

Beta: Nelson Rocks costs $53 per person and includes guide and gear. You can also sign up for full-moon tours through October (headlamps provided).

The town of Jackson is known for its big mountains. Most require a lot of walking to even reach the base. But from June through September, you can hop on the Bridger Gondola and, after a short walk, clip into one of the newest via ferratas in the country. The route traverses over low-angle gneiss and granite pegmatite, with jaw-dropping views. There are three main routes connected by a trail system. If you’re planning on moving fast, you can complete all three in half a day.

Beta: The highlight is a 120-foot suspension bridge (the site of more than one proposal). The easy and intermediate routes tuck into the sides of Casper Buttress and Ranger Ridge. And the most difficult (Ascender and Venturer) climb is up the steep, rocky spine of Casper. You need to climb with a Jackson Hole Mountain Guide; group rates start at $135 and go up for private trips.

Telluride has always been a bit Wild West, and the via ferrata in the box canyon just outside of town is no exception. The 1.5-mile via ferrata was unofficially established on the flank of Ajax Peak, rising 12,785 feet out of the canyon at the edge of town.

Local climber Chuck Kroger made it his life work to build the via ferrata. As he had no official permit, he installed many of the hand- and footholds by headlamp. The cables aren’t continuous, meaning you unclip occasionally when walking on trails between cliff faces. But that just adds to the adventure.

Beta: You can hire a guide, but people with the proper equipment can venture out on their own. Views of the town, Bridal Veil Falls, and the surrounding peaks are fabulous. The most difficult section, a.k.a. The Main Event, towers several hundred feet above the valley floor! Learn more and plan a trip here.

This spectacular via ferrata was finished in October 2018. A 4×4 affectionately dubbed “The Beast” delivers you to the base. Then up you go, with more than 500 vertical feet of climbing. One route ascends a ridgeline (the Sundial Arete), while the more difficult path ascends the iconic 1,000-foot Tram Face (the Skyline Traverse).

Beta: While the Face has more exposure, the Ridge features a 50-foot monkey bridge (two cables, one for your hands and the other for your feet) and a couple of thought-provoking chimneys. Consider these via ferrata experiences gateways to climbing. You’ll receive a stunning view for your courage — a look down onto the vast Olympic Valley. Group and private tours are available starting at $99 for 2.5 hours.