At 19, rock climber Nathaniel Coleman is crushing it.

The all-around achiever took the gold in two bouldering national competitions, back to back, hit the books for his computer science degree, and didn’t lose any sleep… all in a seven-day crunch earlier this month. The whole time, his gleaming smile was left mostly intact.

Coleman is an on-the-rise sport climber and boulderer paving his athletic career while also getting a college degree. Not to mention, his mental prowess (discussed below) is one that athletes in any field and working professionals can learn from to help overcome intimidating circumstances.

This year, Coleman kicked off a streak in January when he charged the indoor USA Climbing Bouldering Open National Championship. He took first place over nine-time reigning champion Daniel Woods, a climber that Coleman admires “for being the best outdoor boulderer in the world.”

Next, he earned the Bouldering Youth National Championship and took the number-one spot for his fourth time since 2012. Then, The North Face showered him with the 2016 Young Gun Award, which spotlights on-the-rise climbers that exude sportsmanship and community values alongside athletic triumphs. 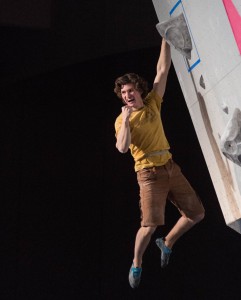 “I feel blessed and so grateful that everything could go my way! It’s a good feeling to have hard work pay off,” Coleman said.

Also under his harness: A Youth Sport Nationals championship. Yes, he’s at the top of sport climbing, too. Not to mention he’s in fourth place in the IFSC Bouldering World Cup standings among a company of world-class climbers like Adam Ondra and Alban Levier.

Coleman’s routine is a testament to hard work. The Utah-based climber trains in a gym five days a week for 2 – 4 hour sessions, all depending on how much homework he is assigned at the University of Utah.

At age 10, when he first got on the wall, he joined the competitive team at Salt Lake City’s Momentum Indoor Climbing and for the past five years has received guidance from coaches Kyle O’Meara and Noah Bigwood, which sharpened Coleman’s skills.

“When I first started climbing, it seemed to come naturally despite not training very hard. But, over the past two years, I’ve seen very noticeable improvement come from an intense training plan that my coaches have made for me, and my strength training plan changes slightly every year to best meet my goals,” explained Coleman.

Exercises that focus on finger and forearm strength:

As for diet? That’s not a huge hinge of motivation for Coleman, yet. But the more sleep, the better.

Beyond his training, Coleman derives inspiration from fellow climbers including Kilian Fischhuber for his “unparalleled success in competition,” and Alex Puccio for her “intense dedication to training and climbing.”

The Power Of The Psych

Regardless of type of climbing, psychological research and climber surveys both support a notion that even when a climber’s physical strength is top-notch, mental strength is the ultimate factor that determines success. This is outlined by journalist Don McGrath for Climbing Magazine in “Learn This: Mental Training for Climbers.”

Conquering fear through mental training is the premise of “High and Mighty,” Daniel Wood’s documentary featured in the newest Reel Rock series. (He goes highballing: bouldering up a route that’s so high the consequences are, well, big. An exact textbook distance up for debate.) 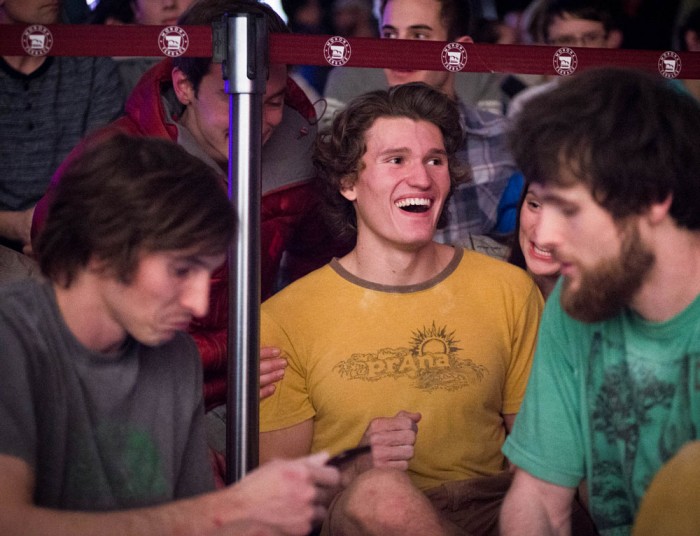 For Coleman, his mental warm-up is key for competition. “My routine before competition begins when I step off the plane. I try my best to not think about the competition ahead, the problems I may encounter, or how strong the other competitors are. This becomes really difficult when trying to fall asleep the night before competing, but I do my best,” said Coleman.

“I honestly believe that if I get psyched about the competition too early, I’ll be unable to maintain the psych until my climb time and just burn out. So, in isolation, I take my time warming up my body and my mind. The power of the psych is definitely an advantage that I’d always like to have if possible,” he explained.

Up ahead, Coleman is prepping for June’s Vail World Cup bouldering competition at the GoPro Games. Then he wants to switch gears to outdoor bouldering and sport climbing, but he’s keeping an open mind.

“Maybe I’ll try some different forms of climbing outside my comfort zone. I recently went crack climbing for the first time, and although painful, I really enjoyed getting into the flow,” he said.

Ultimately, he said when finished with college his degree he will travel the world, climbing, and working remotely. And, if climbing is accepted for the 2020 Olympics, you can bet Coleman will be looking toward Tokyo.

“Hopefully, I’ll be able to represent my country as an Olympic athlete!” he said.

–Read more about Nathaniel Coleman on his IFSC and USA Climbing profiles.