With a steel insert on the Edelrid Bulletproof, climbers can expect a heavier yet longer-lasting quickdraw. In our test, we found the innovation a welcome improvement to climbing quickdraws.

Edelrid invests sustainability along the entire manufacturing process, albeit quietly. The German company was the first to meet the Bluesign environmental standard for climbing ropes in 2009, and the company earned EMAS and DIN ISO 14001 certification for environmental responsibility in 2010.

In the fall of 2016, Edelrid released the Bulletproof Quickdraw, expanding its efforts in sustainability. The quickdraw enhances durability with a steel insert at the apex of the rope-end carabiner.

For this review, I tested the quickdraws during the 2017-2018 winter season during both guiding and personal sport climbing days. 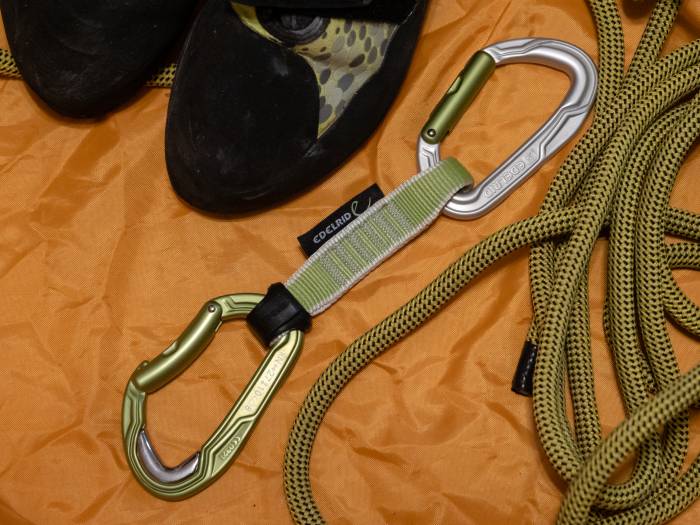 In short: The Bulletproof Quickdraw is a high-quality quickdraw that enhances the lifespan of the lower carabiner and rope. A steel insert defends the softer aluminum from rope abrasion, slowing carabiner wear and reducing aluminum oxide deposits on the cord.

The steel can add safety by decreasing the likelihood of rope damaging burrs or edges. There are lighter and less expensive quickdraws on the market, but if the longevity of both carabiner and line are of concern, the Bulletproof is a logical choice.

The carabiners of the CE- and EN-certified Bulletproof Quickdraw possess a three-dimensional H shape for material efficiency. They both employ a keylock for snag-free performance and have an anodized finish.

The 58 x 100 mm Bullet top carabiner doesn’t have the steel insert. It’s rated to 28 kN closed gate, 9 kN open gate, and 10 kN cross-loaded. The straight gate has gate spring tension similar to other high-end carabiners in my collection. It has notches formed into it for traction, and the opening measures 21 mm.

The 58 x 100 mm Bulletproof lower carabiner houses the steel insert at the rope bearing apex; the insert only spans the interior edge and halfway down the carabiner sides.

Exactly how this steel insert is attached to the aluminum carabiner body is a guarded secret. All of my investigative attempts were met with a silent smile.

The Bulletproof carabiner carries the same shape as the Bullet carabiner. The steel insert causes a slight loss in two load ratings; 27 kN gate closed, 8 kN gate open, while the 10 kN off-axis rating is the same as the upper carabiner. The gate opening measures 20 mm, a slight penalty for the bent gate.

The Bluesign-approved polyamide bar tacked sling comes with a rubber keeper for the rope end. It’s rated to 22 kN and is 23 mm across its widest point. The Bulletproof Quickdraw is available with a sling measuring either 12 or 18 cm.

Bulletproof Quickdraws at the Crag 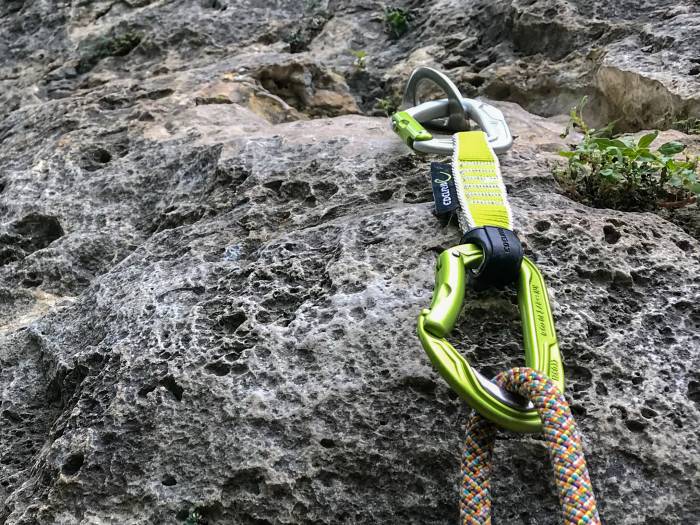 The Edelrid Bulletproof Quickdraws worked as one would expect a high-end quickdraw to function: They were largely forgotten about, performing their duties without fanfare.

Clipping at both the bolt and rope ends was snappy and secure thanks to the traction-inducing indentations in the gate and its springs. A little drag occurred when I applied force perpendicular to the gate while opening, but this same feeling exists in all my quickdraw carabiners (except for wire gates). Removal from hangers was smooth, as was unclipping the rope, the generous nose radius angle and keylock facilitating both.

The sling dimensions were adequate for grabbing while cleaning overhanging routes. I also concurrently tested a new cord during this time, keeping the Bulletproof Quickdraws together with the rope during all outings. Aluminum oxide deposits, which can hasten rope wear, were almost nonexistent.

And although I didn’t notice during sport climbing use, the gate openings of Bulletproof bent-gate carabiners are markedly smaller than those on the Petzl Spirit bent gate carabiners, at 20 mm versus 25 mm.

As the sport climbing season surrendered to increasing heat and humidity, the rope-end carabiners on the Bulletproof Quickdraws showed zero visible wear. The bolt-side carabiners did emerge with a few scratches and shallow gouges from stainless steel bolt hangers. But this happens to my other aluminum carabiners too.

I often thought Edelrid should offer the Bulletproof Quickdraw with the Bulletproof carabiners on both ends of the draw, but this option doesn’t exist in the brand’s lineup. Edelrid does produce a Bulletproof straight gate carabiner separately, so retrofitting is an option, albeit a costly one.

Climbers tend to be environmentally concerned, but each gear purchase produces a net negative impact. Edelrid has stressed sustainability across the company, and the Bulletproof Quickdraw reflects its commitment. There isn’t another option that combines the longevity of steel with lightweight aluminum in a carabiner or quickdraw.

The Bulletproof functions like a high-end quickdraw should — remaining mostly forgotten until it catches a fall. It does weigh more than other options, but the wear resistance is legitimate. And the quality of construction and materials suggests a longer lifespan than quickdraws with all-aluminum carabiners.

They do cost more: At $29 for 12 cm and $30 for 18 cm, the Edelrid Bulletproof Quickdraw is among the priciest quickdraws available. But with an extended lifespan, reduced rope wear, and less chance of cord shredding sharp edges, the value may expand for frequent climbers.

Up Next: Buy It for Life: Iconic Gear That Hasn’t Changed