Contributing Editor Steve Graepel is based in Idaho. He returned from a mini expedition (and massive gear test) on Mount Rainier late last month. 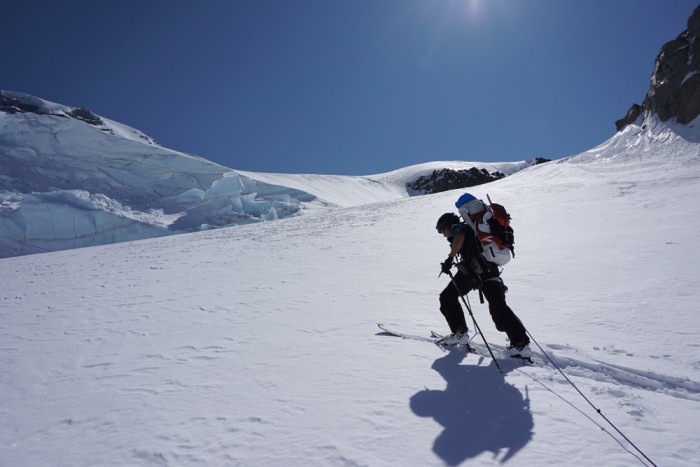 “So what the hell do we do now?” I bark at my partner through the wind. I’m at an edge — mentally and physically — standing above a cliff on Rainier’s Ptarmigan Ridge.

Confidence crumbles beneath my ski boots and into the cauldron of clouds, boiling with uncertainty. As if to give us the finger, out of the storm pokes The Needle, a landmark spire jutting off the Mowich glacier.

Then the answer I’d rudely requested a moment before. “We wait,” says Chris Minson, my friend and climbing partner on this crazy trip.

A mountain of superlatives and surprises, Rainier has drawn upon most of our skills. It only makes sense we practice the hardest of all now three days into the trip: Patience. 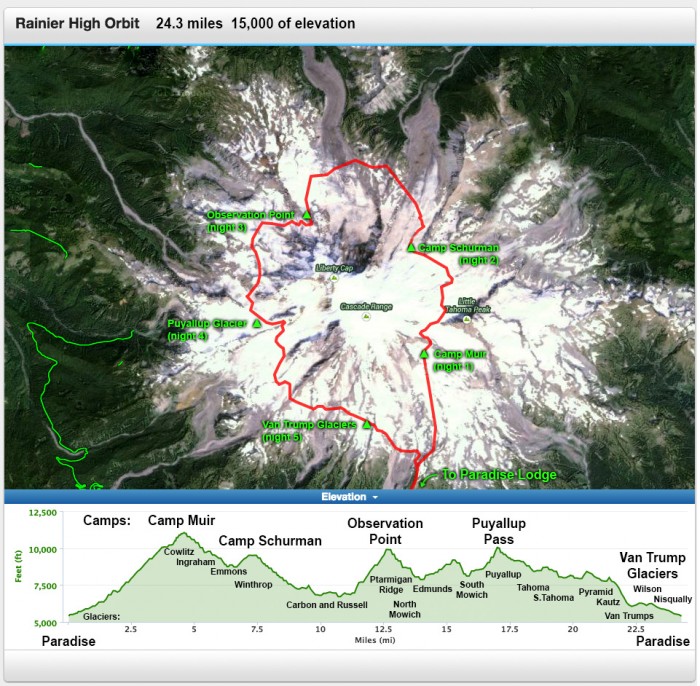 “High Orbit” is a rarely climbed/traversed route on Mount Rainier. It takes a 360-degree line around the massive volcano, yo-yoing between 7,000 and 10,000 feet via climbing routes and glacier traverses. It’s a 20+ mile trip, and for much of it climbers are on skis and roped, often with an ice axe in hand. Along its course the High Orbit tags pieces of the routes that helped define American alpinism: Liberty Ridge, Curtis Ridge, Ptarmigan Ridge, Edmunds Headwall, Willis Wall, and more.

We are hardly the first to conceive skiing around Washington’s Mount Rainier. It was first encircled at timberline over 100 years ago when a three-week expedition helped survey the Wonderland Trail in 1915. Dee Molenaar helped evangelize the idea of a high glacier route in a trip report published in his 1971 book, The Challenge of Rainier. But in spite of its rich history, only a handful of mountain enthusiasts have completed the route—dubbed the “High Orbit”—and the line remains largely unknown. 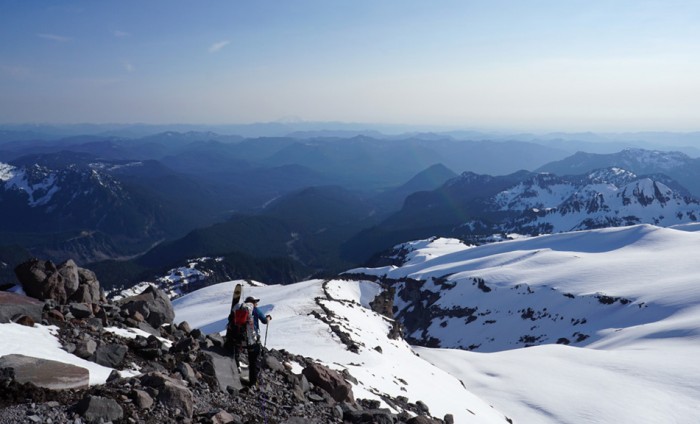 The winters of 2013-2014 were banner snow years with the highest recorded snow accumulation of the past 50 years. Hundreds of feet of snow loaded the glaciers, causing them to accelerate down the mountain. The glacial rush-hour caused new pileups of crevasses, sometimes forging entire new routes. On top of this, dubbed the “ridiculously resilient ridge,” 2015 was an exceptionally dry year in the Pacific Northwest. While we could look forward to an unusually long weather window, only shallow winter snow bridged virgin crevasses on the route. 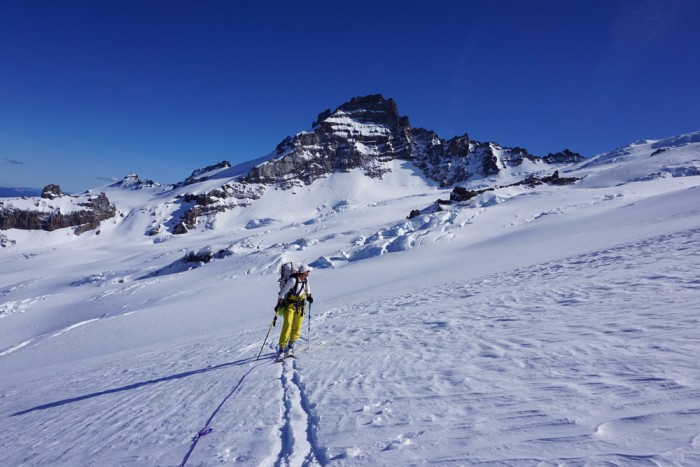 Diving headfirst into the shallow end, we immediately cross the Emmons glacier from Little Tahoma, the largest glacier in the lower 48 and the first in a string of 17 such glaciers on our trip. Like reading iced tealeaves, the Emmons could foreshadow our success or seal our failure.

And progress is pathetic. Tied together by 30’ of cord, we cautiously eke down the Emmons through a labyrinth of icefall and seracs. Chris bends a pole early in the morning while trying to control his descent. 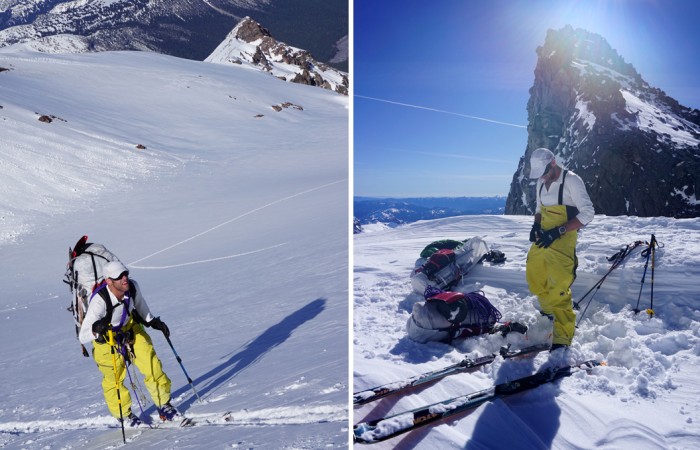 “Huh…” he mutters. Chris curiously considers his pole’s new shape. We are going exceptionally light, carrying half a rope, a small tent and…heck, we are even sharing a sleeping bag. It becomes crystal clear that we need everything in our small packs to succeed. Chris’ bent pole is like a snowball across the bow that our fast and light, hold-no-bars (or back-up) plan could cartwheel into disaster pretty quick.

Crawling four miles in ten hours, we finally crest Camp Schurman at 9400’ as dusk falls on Rainier’s Emmons-Winthrop route. Fed and exhausted—we flop into our bivy tent to rest. 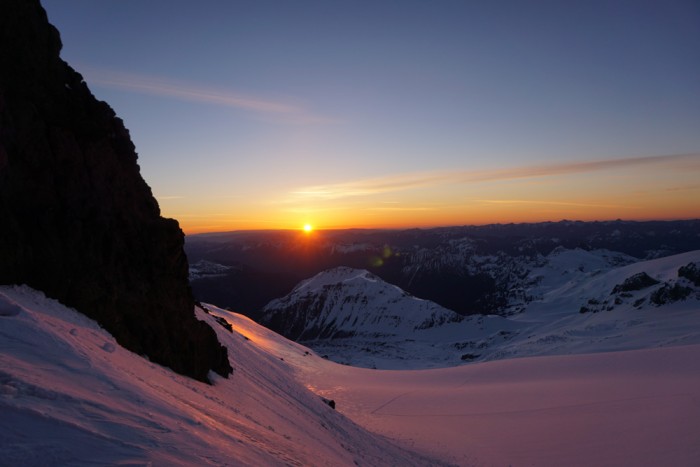 Cue the full body cramps. Chris, having skimped on fluids, fights back waves of surging muscle spasms rolling through his body in 30-minute intervals. In the dark, between Chris’ outbursts, I admit I might be getting too old for this.

“We need a solid day’s progress, way better than what we did across the Emmons.” I try to restack my confidence. Chris’ cramps fade and we finally drift to sleep.