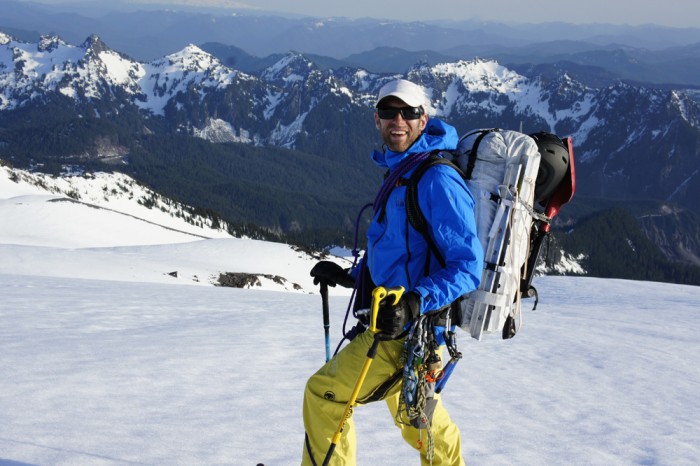 Experience pays dividends, and in the morning we swiftly chomp through the miles under the imposing north face—which is good because I promised Chris this would be a walk in the park (albeit Rainier National Park).

Along the way I glance up at Liberty Ridge, a prominent line that cuts the formidable Willis Wall. It’s a route I climbed back in 1999. The ridge is known to be the only “safe” line that punctuates Rainier’s nordwand. Yet just last June six climbers washed off the route.

“Liberty looks trashed,” Chris points at its upper route. Fresh avalanche debris plasters the smooth high slopes. “It may be a while before Liberty returns to good nick.” 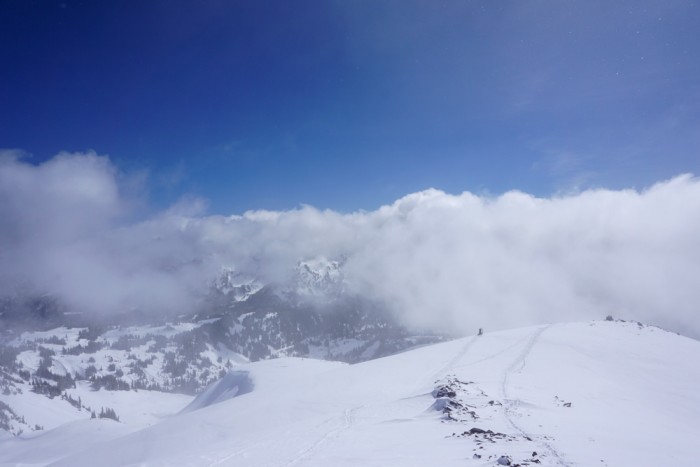 Lenticular clouds threaten to pull the hood over the summit all afternoon and continue to stir ominously in the North Mowich chasm. Chris and I spend the evening trying to piece together the puzzle that completes the descent off Ptarmigan Ridge, but it’s impossible to solve with the cycling weather.

“We’ll see what tomorrow looks like,” Chris shouts over the wind. 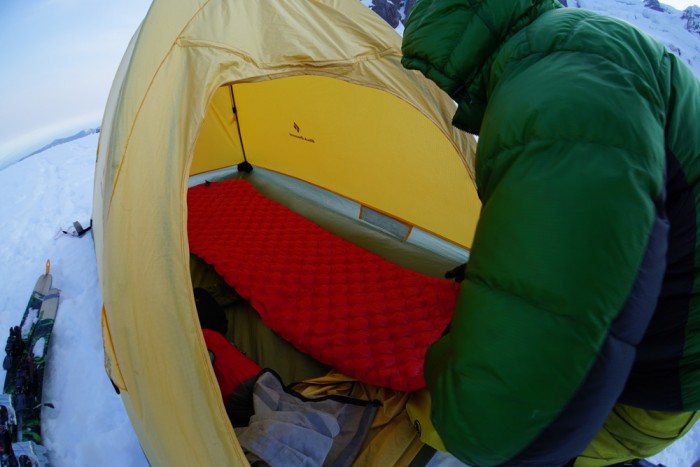 We crawl in our tent and put it to bed—or at least we try to as bursts of wind charge the tent like a bull throughout the night. But in the morning we wake up with a rested perspective, clear skies, and an eye on a 1500’ talus slope plastered in Styrofoam snow all the way to the North Mowich floor.

After traversing a knife-blade ridge, we unclip from the rope, strap skis to the packs, and feel our nerves tighten as we each pick our own line down the relentless grade. Like two flecks of pepper on a table of salt, I feel insignificant and exposed on the massive slope. Two hours later we finally roll out into the basin and scamper to a safe place where we can strap back into the comfort of our skis. 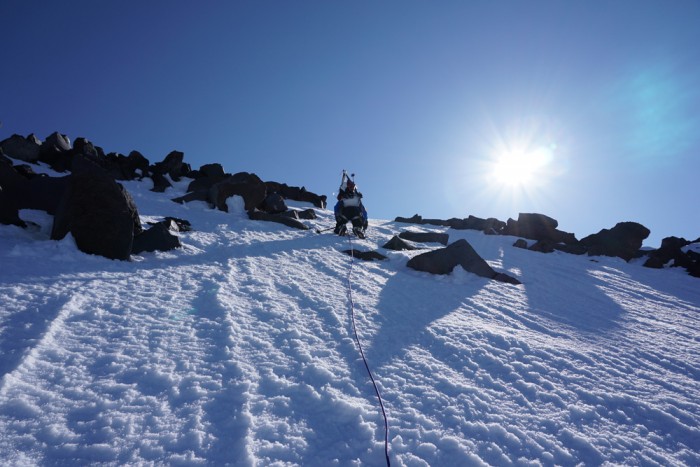 On the scale of big, Rainier is massive. It’s unlike anything else in the lower 48. We constantly are readjusting time and perspective to swallow its supersized portions. Yet as we ski off the Mowich and into the Edmunds, the ratio spontaneously shrinks. What appears far is confusingly close. But the terrain doesn’t give up without a fight. Our path ping-pongs across the glacier, in and out of shadows, across slush and bulletproof ice until it finally eases out onto the Puyallup plateau below the Sunset Amphitheater.

We probe a safe-zone for hidden holes and then set up the tent under a turquoise-blue canvas where we watch Seattle’s evening skyline ignite below. 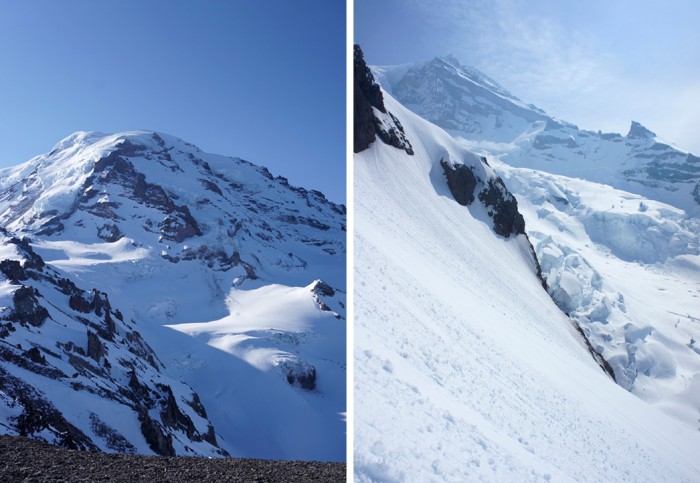 After four days moving as one, Chris and I become more intimate with the terrain and conditions. Already behind schedule by a day, we long to close the gap in one final push. To make it work, though, we’ll have to push the hands on the mountain’s face from 9 o’clock to 6 o’clock—a quarter of the route. But if we’ve learned anything, it’s that the mountain sits in its own time zone—impervious to the wants or demands of our civilized schedules.

We break camp at first light and ski up a dire 2000’ slope that chokes into a narrow ice chute at Puyallup Pass. While Chris is using ski crampons that bite the ice under his bases, I resort to weighting my ski’s metal edges for traction. I jam my pole under my downhill ski to keep my edge from slipping out.

In reality, if one of us slips it’s going to be a long slide to the bottom of the slope in a rat nest of rope, sharps, and edges… or worse yet, we pitch off the cleaver entirely. 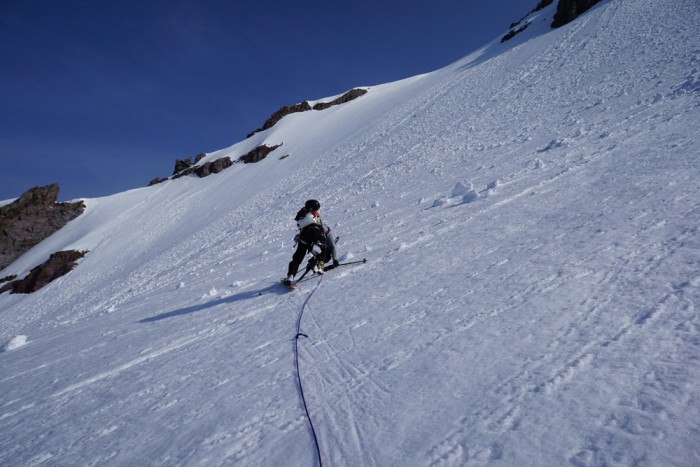 “This is getting old!” I shout to Chris, the most cranky I’ve been the entire trip. “We gotta get off this steep ice.”

We shimmy over to a snow shoulder below St. Andrew’s Rock to set up a grim belay in a crap chute filled with fresh debris that sloughed from above. I jam my ice axe into the snow and clip into it for safety. Chris turns around and I pull his axe out… with it I watch his helmet drop off his pack and accelerate down the wall. We both watch it disappear and without a word exchange skis for crampons and descend into the slidezone. 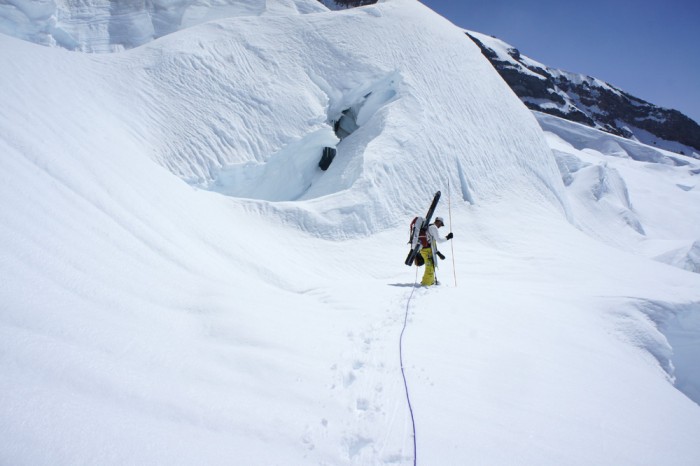 The Tahoma glacier rounds into the South Tahoma glacier, which relaxes into the Pyramid and into the Kautz, and finally yielding into the marshmallowy Van Trump glaciers. We are within striking distance of the truck, but late in the day seems to foster poor decisions. Rather than push our luck, we set up one last camp and decompress on the week’s events.

Though we are finally safe, the mountain doesn’t loosen its grasp on us. The horror show of the Emmons, Mowich, and Puyallup replay in my dreams. To save weight, we’ve shared one sleeping bag that Chris pins shut with his arm to keep the heat from chimneying out between us. As I roll over, I pull the bag out of Chris’ hands, which works into his dream as losing his grip on the line to me. Chris wakes in shivers, and then twitches back to sleep.

Dee Molenaar penned the High Orbit near the end of his book. But it’s not an afterthought. Rather, it’s a graduate school chapter for those ready for a larger commitment.

The orbit is a culmination of a lifetime of experience, drawing from all of our climbs, travels on glaciers, and our endurance pursuits. As we drop to the Paradise parking lot, Chris and I agree it was likely the trip of our lifetime. A walk in the park, just like I promised.