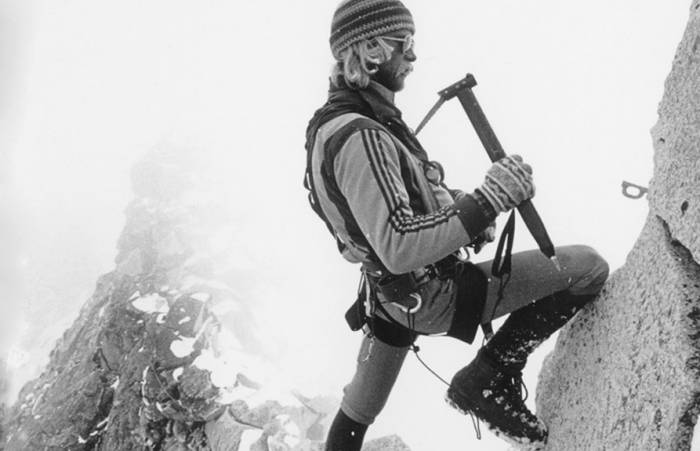 The Piolet d’Or (meaning “Golden Ice Axe”) award is given each year to climbers to celebrate “the year’s greatest alpine-style climbs, chosen both for their aesthetics and for the sense of exploration and innovation of those so-called conquerors of the useless.”

It recognizes a handful of the boldest, most innovative alpine climbs of the year. It also recognizes a single alpinist with a Lifetime Achievement Award.

This year’s winner, Lowe, is a giant of the sport who pioneered alpine climbing during the 1960s through 1990s.

Born in 1950, Lowe’s climbing career followed an arc like no other American mountaineer. He made upwards of 1,000 first ascents, authored books, and invented gear. Today Lowe lives in Louisville, Colo., and is continuing to inspire while battling a degenerative motor neuron disease.

The organization did not yet announce this year’s other Piolet d’Or winners. The awards will be presented on April 12 in Grenoble, France.

The organization explained Lowe was chosen as a “visionary” of alpinism. Few would argue against that. Lowe was also inducted into the Mountaineering Hall of Excellence at the Bradford Washburn Museum in Golden, Colorado, in 2013.

Lowe is one of the most influential climbers ever. With around 1,000 first ascents, some of which are rarely followed to this day, it’s impossible to summarize his epic career in a single article.

One of Jeff Lowe’s greatest climbs was a failure. In 1978, Jeff, his cousin George Lowe, Jim Donini, and Michael Kennedy had to turn around only 150 meters from the summit of Latok 1, a magnificent peak that rises high above Pakistan’s Biafo glacier. At the time, no rope team had ever reached the summit of Latok 1 (though it would be climbed the next year by a Japanese team), and the four Americans had chosen an alpine-style climb up the North Ridge: a clean, obvious and extremely difficult line. That was nearly 40 years ago. Since then, many other teams have made attempts, but the North Ridge of Latok 1 remains one of world’s most coveted and elusive objectives. No other rope team has even come close to the point Jeff and his friends reached.

Climbers hoping to follow in Lowe’s footsteps better have endurance. Among his ticks are Zion National Park’s “world classic” route, Moonlight Buttress, Bridal Veil Fall, and a solo route on the south face of Ama Dablan. Tack on legendary ascents of Kwangde Ri, Kangtega, and Taweche, and you’ve got a start.

These climbs pioneered the modern trend of technical, aesthetic climbs. Gardien writes of what he calls Lowe’s “greatest alpine adventure” in 1991.

With the goal of completing a solo first ascent of a direct route, he threw himself into the austere winter universe on the north face of the Eiger. Making it to the top of Metanoia took all that he had and forced him dig deeper than ever before. This brush with fate inspired a profound introspection and a radical evolution in his mentality – hence the name of the route. Three years later, Jeff applied this same metanoia to a discipline that he loved: ice climbing. The image of a guy dangling from his ice axes below a rock roof before attacking a free-hanging ice dagger was seen around the world. That route, Octopussy in Vail Colorado, was a stroke of genius – it was the origin of a new sport (dry tooling) and would forever change practices in ice climbing, alpinism, and Himalayan climbing.

Gear Design, To Fight With Disease

His ultimate battle with an ALS-type degenerative disease is now the subject of a film. His movie, Metanoia, goes into detail. The film, narrated by John Krakauer, was a finalist at the 2014 Banff Mountain Film festival. A great article in the Denver Post dives deep with Lowe about his unknown neurodegenerative disorder. Watch the trailer above.

For those who would like to learn more about this inspiring alpinist, check out his website, Jeff Lowe’s Metanoia.

Up Next: Woman Just Climbed The Hardest Route Yet