Home » Climbing » Mountaineering » Get High In Bed: How To Acclimatize At Home

The oxygen at the summit of an 8,000-meter peak is so thin most humans can’t survive if plucked from sea level and dropped at the top.

That’s why most mountaineers spend a month or two on a mountain before summiting, making repeated trips to progressively higher spots. This allows the body to acclimatize for the final summit push.

At least that’s the tradition. But when Adrian Ballinger and Emily Harrington climbed 8,188-meter Cho Oyu in a single “lightning” push last month, they cut that step entirely.

“The key to moving fast was to have logistics dialed and be in great shape,” said Ballinger, 40, the founder of Olympic Valley, California-based guiding service Alpenglow Expeditions. “But we combined that with pre-acclimatization with Hypoxico altitude tents.” 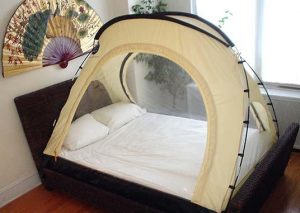 Hypoxico’s units are sealed spaces – as small as a mask, or as large as a whole room. They thin the concentration of oxygen in that space by replacing it with nitrogen. This simulates higher altitudes within the confined area.

Ballinger and Harrington usually opted for a tent or head tent during training.

The idea being, when placed under duress with less oxygen, the body produces more red blood cells, capillaries, and mitochondria, all of which help deliver more oxygen. The body adapts to low oxygen levels, and thus performs more efficiently.

It boosts fitness and prepares the body for high-altitude climbing, without all the time spent on the side of a mountain.

“This caught the attention of endurance athletes,” said Brian Oestrike, 37, the CEO of Hypoxico, which designed and patented the first altitude tents in the ’90s. “From about 1995 to 2005, you saw a lot of triathletes, cyclists, and other extreme endurance athletes using these systems.”

It had long been theorized that athletes from high-altitude climes – like Colorado or Kenya – had a physiological advantage from training in thinner air. But a 2001 study published in the Journal of Applied Physiology confirmed a significant performance boost for athletes who “live high-train low.” That means they sleep or rest in an altitude tent or chamber (or live in high mountains) and do their actual training at lower elevation, where they can still perform at maximum strength.

Oestrike said Hypoxico arranged for training systems as small as a mask and as large as an entire room at the U.S. Olympic Training Center in Colorado Springs.

“We have NFL teams that are starting to use them,” Oestrike said. “Most English Premier League [soccer] teams have their athletes using them.”

“I first heard about altitude tents in 2010 or 2011 from athletes who were using them to train for extreme endurance events like [The Leadville 100],” said Ballinger. “And I thought, I’m spending seven to eight months a year in tents on expeditions, and if I can find a way to shorten that, I will.”

It followed, Ballinger reasoned, that if tents could cause adaptations for endurance athletes similar to living at altitude, they should be able to simulate the acclimatization process in mountaineering, possibly cutting steps out of the summiting process and cutting the risk of various altitude-related ailments like acute mountain sickness or high-altitude pulmonary edema.

He tested his hypothesis on an Alpenglow expedition to 8,485-meter Malaku, the fifth-highest peak in the world. The trek to the mountain was so gnarly that would-be climbers often failed before reaching base camp. Ballinger wanted to skip it, flying the group right to 17,000 feet.

“So we had them pre-acclimatizing using the tents, and we had a 100 percent success rate,” he said.

Ballinger began integrating it into his own training – Olympic Valley sits at 6,000 feet – and said by January 2017, all of Alpenglow’s mountaineering trips will have clients pre-acclimatizing using Hypoxico systems in order to shorten the ascent time.

“We can cut 30 to 50 percent off the length of a trip with the rapid ascent program,” he said.

Ballinger said he and Harrington used Hypoxico systems for about eight weeks before Cho, but that a 6,000- or 7,000-meter peak might only require four to six weeks or pre-acclimatization.

“We spent eight hours a day in the tent, mostly sleeping, but sometimes watching a movie or doing e-mails,” he said. “We bumped up the altitude slowly with the goal of sleeping well at night. If you’re too aggressive, you can hurt your recovery and not see the full benefits of training.” 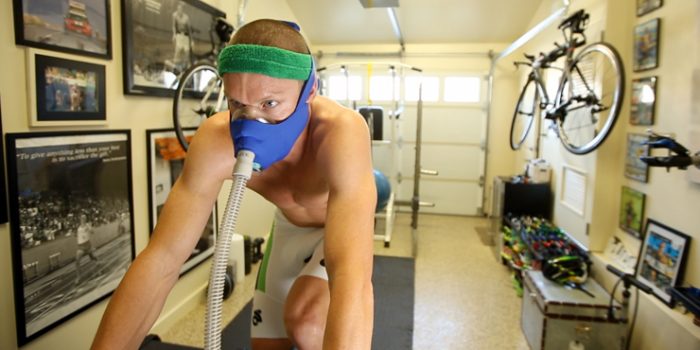 To keep from overdoing it, Ballinger employed a sleep tracker and pulse oximeter to measure oxygen saturation in his blood.

“The goal was to have good sleep and keep saturation above 80 percent,” he said. (For reference, normal oxygen saturation is between 95 and 100 percent.) “If it hit the high 80s or low 90s, we would bump it up.”

He and Harrington also “trained high.” They rode stationary bikes using Hypoxico masks – a smaller version of the same oxygen-replacing system as the tents, not the air-blocking masks that became popular a few years ago.

“It’s just like what we do in the mountains,” he continued. “We get to a point where we’re comfortable, push it up until we’re suffering, then drop back down to a comfortable level to recover.” 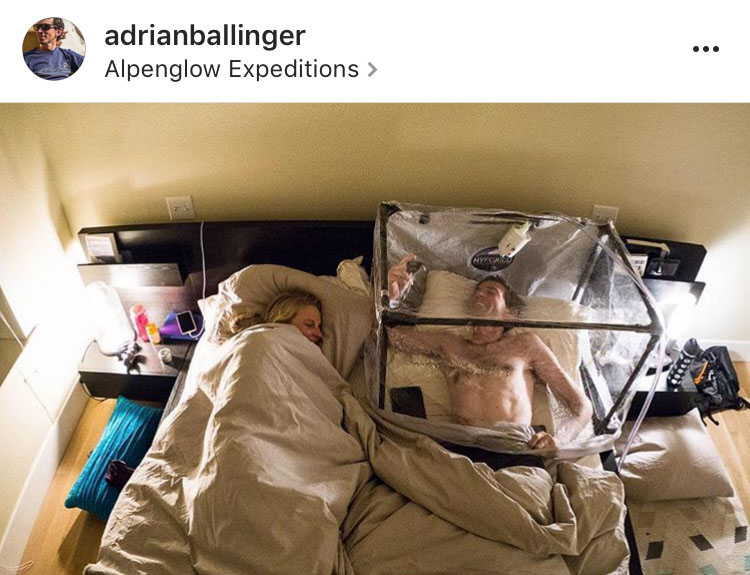 Ballinger said sleeping in the tents doesn’t always make for the most romantic arrangement. (He and Harrington live together.)

“We usually opt for the head tents,” he said, referring to the Hypoxico product pictured above, which covers only above the shoulders.

Some have questioned the ethics of altitude-simulating tents or chambers by endurance athletes, likening them to performance-enhancing drugs.

(Ballinger and Harrington, of course, don’t compete in Olympic events, and this issue does not pertain to mountaineering. However, it has been raised in the endurance sports world.)

Oestrike is quick to point out the World Anti-Doping Agency conducted a review of hypoxic technology and concluded it did not constitute an unfair advantage.

“They basically came to the conclusion that if other people can live in Chamonix or Aspen, and train there, then others should be able to simulate altitude training at sea level and level the playing field,” he said.

After hours of research and months of testing, we found the best snowshoes for every use and budget. And don't miss our buyer's guide with everything you need to get started.