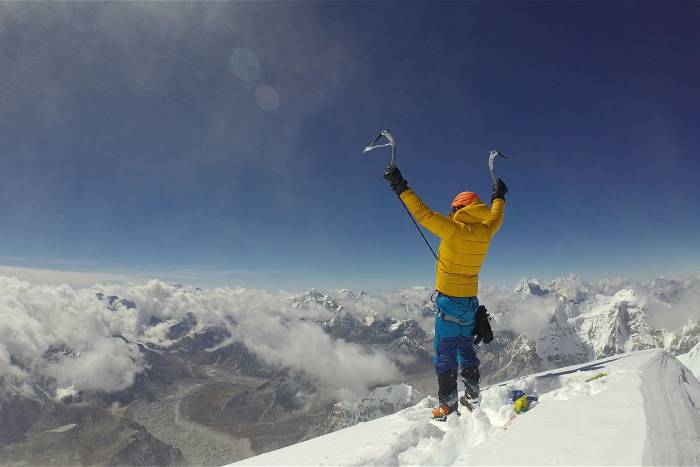 No human had ever climbed Nepal’s Nangpai Gosum II. The 7,296-meter mountain is so dangerous it keeps would-be adventurers at bay while many taller summits were climbed decades ago.

This was so until October 3, 2017, when German climber Jost Kobusch, 25, reached the summit after three days of climbing. Even more impressive, he climbed to the summit alone.

Kobusch first attempted the route on Sept. 25, but had to back down after the sun melted sections of ice crucial to his ascent. He tried again, successfully, beginning Sept. 30.

The young climber adds another notable ascent to his growing resume of impressive alpine climbs in the Himalayas.

What It Takes: 7,296-Meter Peak No Longer Unclimbed

As noted, it took Kobusch two attempts to reach the summit. The Himalayan Database confirmed that this is the first successful summit of the peak.

In both attempts, he started at basecamp at 5,600 meters. Next, Kobusch climbed to camp one at 6,400-meters, then established camp two the next day at 6,840 meters.

During his first attempt, Kobusch hauled up 500 meters of rope to fix in case of an emergency descent. He soloed the route and fixed ropes as he climbed.

The route Kobusch took is south-facing and heats up with the sun, resulting in melting ice and rockfall. Once he reached 6,300-meters, he needed to climb an 80-degree ice wall that, because of the melting ice, resulted in danger near the top of the wall.

At one point in the ice climb, he built a belay station to hang his backpack. As he started to hammer in a piton with one of his ice axes, the belay, ice axe, and screw ripped off the wall. He was left hanging from the halfway-hammered piton.

Kobusch called it quits after this horrific episode and descended the mountain through the night. Despite getting struck several times by rockfall, he remained free from serious injury.

He returned five days later to try again, this time on a different route, ascending faster and lighter.

With no safety equipment except a harness in case of helicopter rescue, Kobusch started his second attempt at the end of September. He left his equipment at the bottom and climbed in his preferred style: quick, efficient soloing.

Kobusch climbed at night to avoid avalanches and eventually made it to camp two without impediment. After he reached the final ridge during his summit bid, he battled through waist-deep powder to the top.

He reached the top at 10:25 a.m., after departing from camp two nearly 12 hours earlier. At the top, 40 mph winds made his summit visit brief.

He calls the use of supplemental oxygen “cheating,” according to his website.

“I chose this mountain because it was unclimbed—one of the last real adventures,” he said of Nangpai Gosum II.

Given this was a solo attempt without supplemental oxygen, his style of ascent will certainly be hard to match for future climbers. It may be many years before another human stands atop Nangpai Gosum II.