If you’ve been keeping up on current events, you probably already know that it has been a difficult and dangerous year in the Himalayas. Over the past few weeks, at least 11 people have died on Mount Everest alone, and another nine have perished on other peaks across the region.

But the news from Nepal hasn’t been all bad. In fact, there have been some impressive feats accomplished by climbers this year, including Kami Rita Sherpa reaching the summit of the world’s highest peak for a record 24th time.

But even that pales in comparison to the accomplishments of Nirmal Purja, who managed to summit six 8,000-meter peaks in a little over a month’s time. 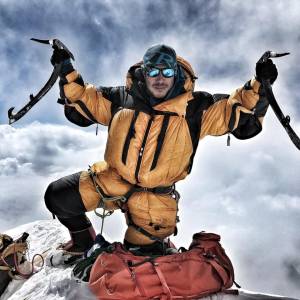 We first told you about Purja back at the start of the spring climbing season in Nepal. At the time, he had just revealed his plans to climb the 14 tallest mountains on the planet over the course of just 7 months. Dubbed Project Possible 14/7, this ambitious undertaking would begin with the former Gurkha soldier attempting an unprecedented six 8,000-meter peaks in April and May alone, which would be a record in its own right.

Purja’s quest began on Annapurna (8,091 m; 26,546 feet), a technically challenging and extremely dangerous mountain that is prone to deadly avalanches. Over the past few years, climbers have found success on that peak by arriving early in the season, prior to the spring thaws increasing the avalanche danger. This proved an effective strategy for Purja too, who used the mountain to acclimatize to the high altitude prior to reaching its summit on April 23.

From there, he went on to Dhaulagiri (8,167 m; 26,795 feet) where he waited out poor weather conditions. In the wake of Cyclone Fani, which brought high winds to the Himalayas in early May, Purja found himself well-rested and properly acclimated but unable to go up the mountain until after the jet stream moved off the summit. That occurred on May 12, with Nirmal and his team topping out that same day.

Rescues Along the Way

As if summiting six of the world’s tallest mountains in 32 days wasn’t impressive enough, Purja also took part in two rescue operations during that same time period. Unlike most other climbers in the Himalayas, he was also in an integral role on his team, working to install ropes and stock high camps with supplies on several of the mountains.

He even took the now-iconic photo of the massive traffic jam on Everest that went viral last week. The image appeared on the front page of newspapers around the world and numerous mainstream news sites reporting on the dangerous conditions that were the result of overcrowding on the mountain.

Phase two of Project Possible is set to take place in Pakistan this summer. Purja hopes to climb K2, Nanga Parbat, Broad Peak, and Gasherbrum I and II. If successful, he’ll move on to the third — and final — stage this fall, which will consist of expeditions to Cho Oyu, Shishapangma, and Makalu in Tibet.

At the moment, the biggest challenge Nirmal faces may not be the mountains he hopes to climb. Following his six-summit effort in Nepal this spring, he now finds himself running low on funds to get the next stage of the project off the ground. He’s currently working hard to raise money to help keep his dream alive, but as of this writing, his plans to go to Pakistan in a few weeks may be in serious jeopardy.

That said, his GoFundMe page has seen an influx in cash over the past few days that could provide the necessary kick he needs to keep the momentum going.

For the record, the current FKT for climbing all 14 8,000-meter peaks stands at 7 years, 10 months, and 6 days. That was set by Korean alpinist Kim Chang-ho back in 2013. If Purja can stay on course, he should get the chance to smash that mark. You can follow his progress on his Facebook page.