The Petzl Fly is an ultralight harness that packs down to the size of a few Clif Bars, and is made specifically for ski mountaineers and alpinists.

I admit, I belong to neither faction of ski mountaineers or alpinists, but I am a splitboarder tiptoeing into steeper, more technical terrain. This past month, I had ample opportunities to log time in the Petzl Fly during an expedition to Denali National Park. Our crew camped on and navigated through a glacier, and rode rowdy lines for a week straight.

In short: The Petzl Fly Harness is ultralight. But it’s got more going for it too. (Like, removable padding, great support, and plenty of gear loops.) Learn why it’s now the go-to for glacier travel for one of our testers.

Why Ski or Ride With a Harness?

This will come as no surprise to winter backcountry travelers, but glacial travel is complex, making a harness obligatory for daily missions in the alpine regions. Avalanche hazards aren’t your only concern.

Instead, you must also contend with obstacles like seracs, bergschrunds, and gaping crevasses, which are often veiled by snow and impossible to discern with the naked eye.

Wearing a harness at all times is accepted as a minimum safety requirement — much like a beacon, shovel, and probe — so that a crew can rope up at a moment’s notice.

If you or a teammate falls, a harness is critical to implementing a successful crevasse rescue. Of course, rocking a harness can also be helpful off the glacier when tackling more technical approaches, rappels, and more. 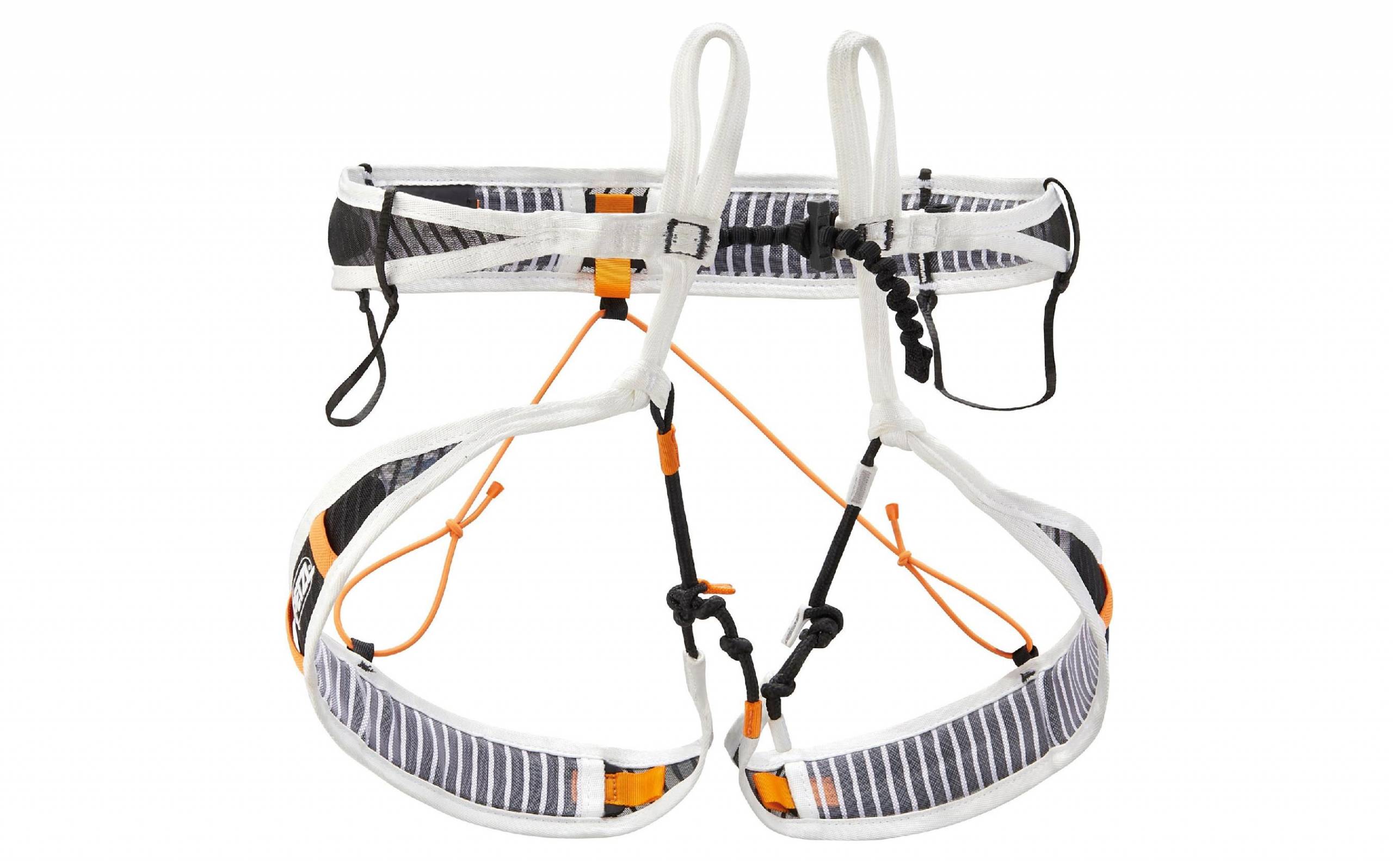 Weighing Your Options: The Petzl Fly Is a Flyweight

I was initially drawn to the Fly, as it’s even lighter than the Altitude, a popular Petzl harness relied on by many ski and snowboard mountaineers. The Altitude weighs in at 160 g (size M), while the Fly weighs 130 g (size M) with padding.

And, the padding — a couple of millimeters of firm foam cushioning — can be removed to pare down to 100 g. While there are a few lighter harnesses on the market, a lack of padding seems standard practice if you want to dip below the 130g mark.

I’m not a masochist or hardcore gram counter, so I toured the entire week with the padding in. The weight and design of the harness made those 30 grams hardly noticeable.

And it offered impressive support as I carried a standard glacier rescue kit: a few auto-lockers, a couple of wiregate carabiners, ATC, sling, Micro Traxion, and Tibloc.

The Micro Traxion and Tibloc come with Petzl’s RAD Kit, which also includes a thin 6mm x 30m RAD Line in a small pouch, about the size of a football.

A couple of times — including approaching a bergschrund when our guide wanted to rope up — I toured with the pouch attached to a gear loop for quick access. This was the only time I noticed the harness sag while touring.

I could easily access all of my gear (with gloves on!) both in practice scenarios and while roping up on the glacier. But, I imagine that some mountaineers might crave more carrying capacity than the Fly offers, as the Fly is purpose-built for fast and light travel.

Unlike a bergschrund-bottomed couloir, the Fly’s entrance and exit are fairly straightforward. It’s a minimalist drop-seat style with a toggle that secures the harness around the waist.

This attachment can be a little finicky, particularly with gloves on, so I opted to secure it in my tent vestibule on chillier mornings. Still, it only got easier with time.

The leg loop attachments are simple — a girth hitch on one side tightens over a knotted cord on the other. Best of all, this combo allows you to easily don the harness by wrapping it around the body while you are in bulky boots, board, or skis instead of doing that awkward, step-through shuffle. 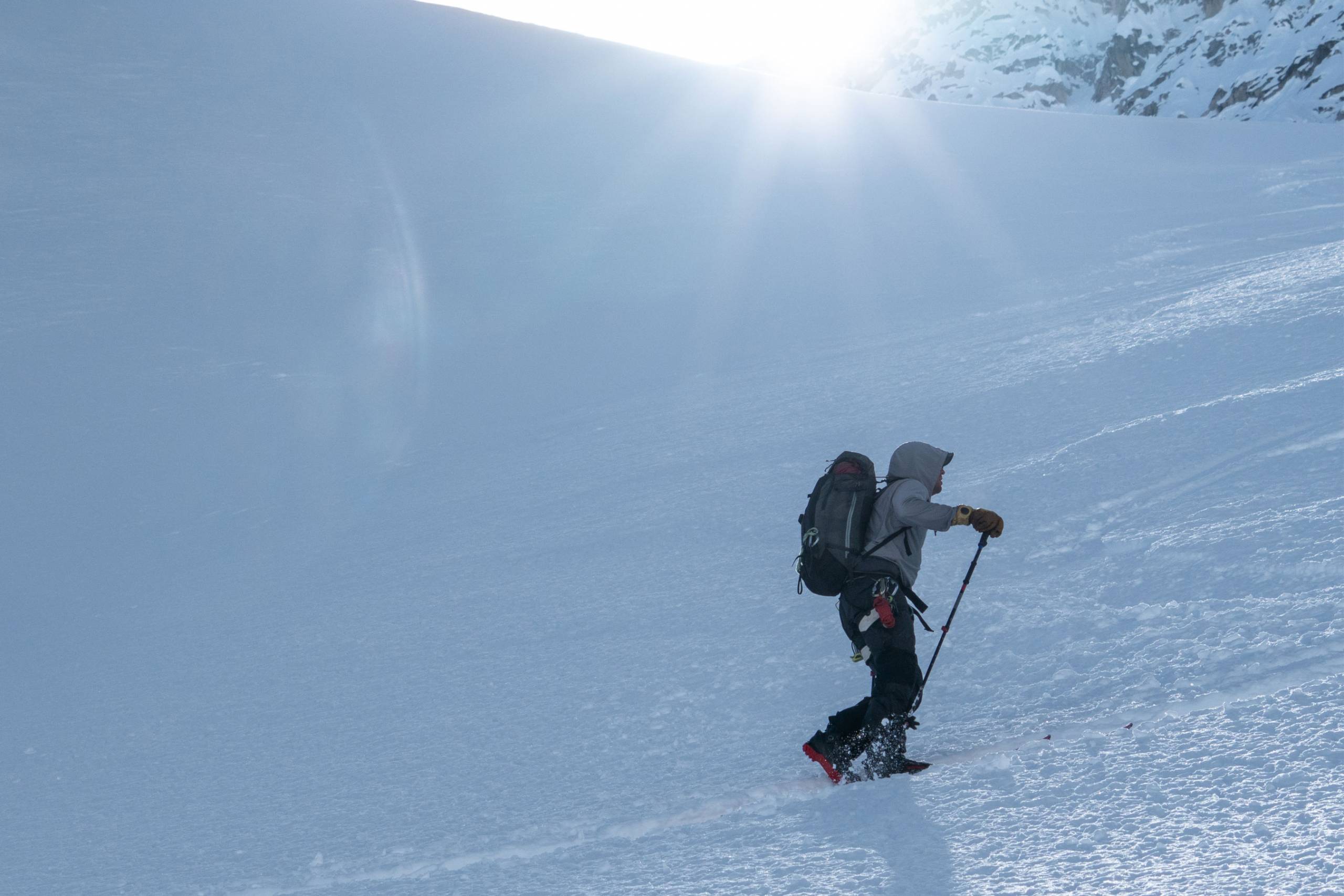 I’m not a big guy — 5’9”, 145 pounds — and I tested a medium. Despite my scrawny frame, I was most comfortable touring with the leg loops in their widest position.

However, when I returned from my trip, I hung off my deck in the harness for 10 minutes. (Luckily, I didn’t fall into a crevasse in Alaska, nor did we rap into any lines, so I put comfortability to the test at home.)

When I was hanging, I was most comfortable with the leg loops a little tighter for more support. If you were to embark on an adventure that meant more air time — say, longer rappels — I’d certainly keep the padding in and tighten the leg loops.

If you’re looking at even longer air time, like hanging belays, you may want to consider something with a touch more support.

While I infrequently enjoy the climb, my primary driver is the descent. And I was pleased to note that the Petzl Fly didn’t impede my range of motion while riding.

I hop-turned down a couple of steep lines and even found the confidence to throw a few spur-of-the-moment threes with the glacier rescue kit jangling against my hip.

Of course, riding with the Fly isn’t quite as liberating as straight-lining down a groomer without a pack on, but it felt comparable to an average day of splitboarding — a big win in my book. 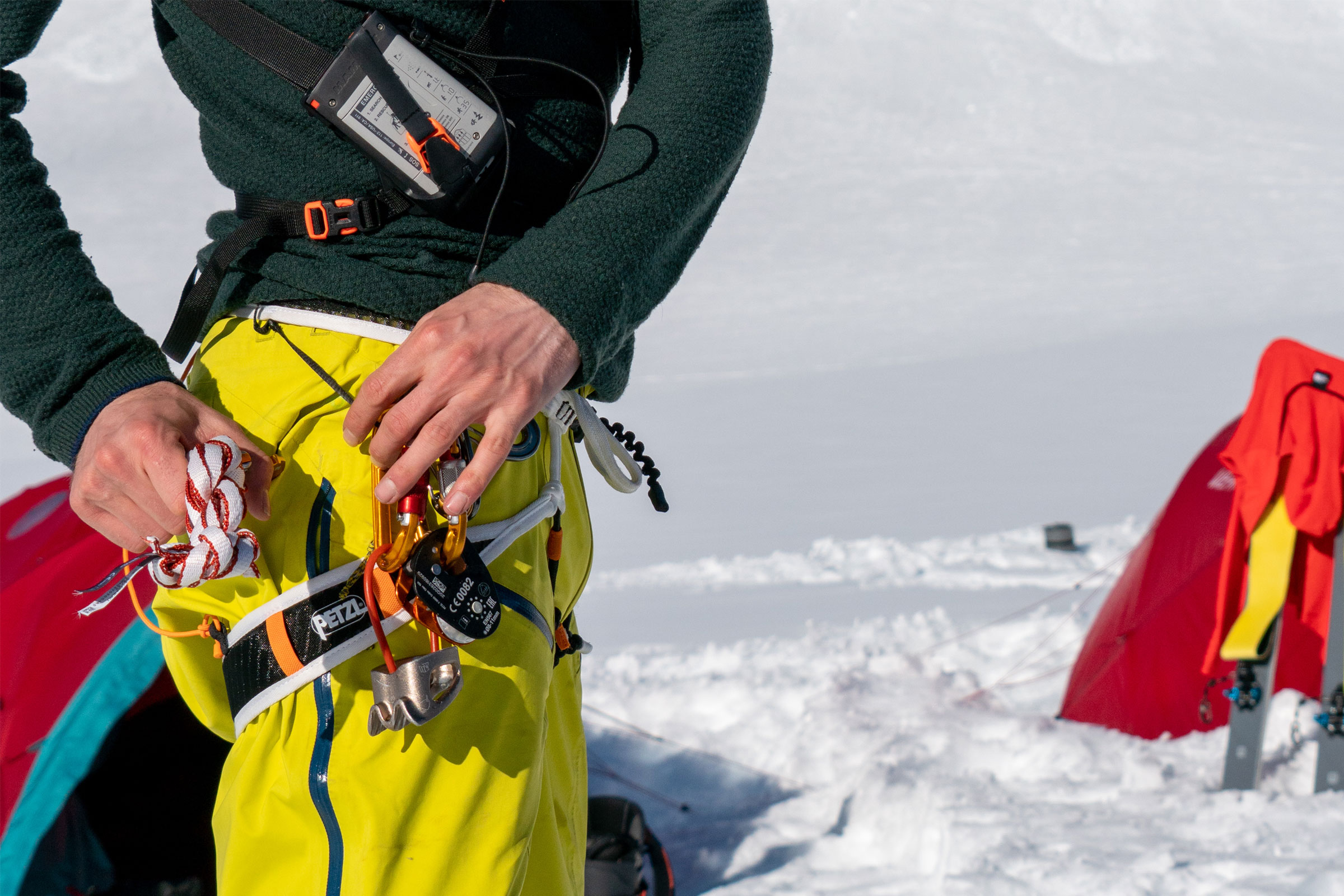 Tying In to the Fly

As I was talking over the finer points of the harness with my team on the glacier, a more experienced alpinist pointed at the dual tie-in loops, saying, “I don’t know how I feel about tying into both loops when shit hits the fan.” Instead of a single tie-in point, this harness has a loop on either side of the attachment system.

His point being, for instance, if you fell into a crevasse, and, due to injury or oversight, tied into only one loop, the harness is completely ineffective. Unlike if you were to tie into a harness with a single tie-in loop or dual, redundant tie-in points.

While his point had merit, I found it easy to safely tie in to both loops — although, granted, I was never in a true pickle. I could see this becoming more of a concern if you are maxing out the size range, as a wider waist would make it trickier to pull the loops closer together.

Long story short: It’s a smart decision to size this harness at home before taking it into the field. 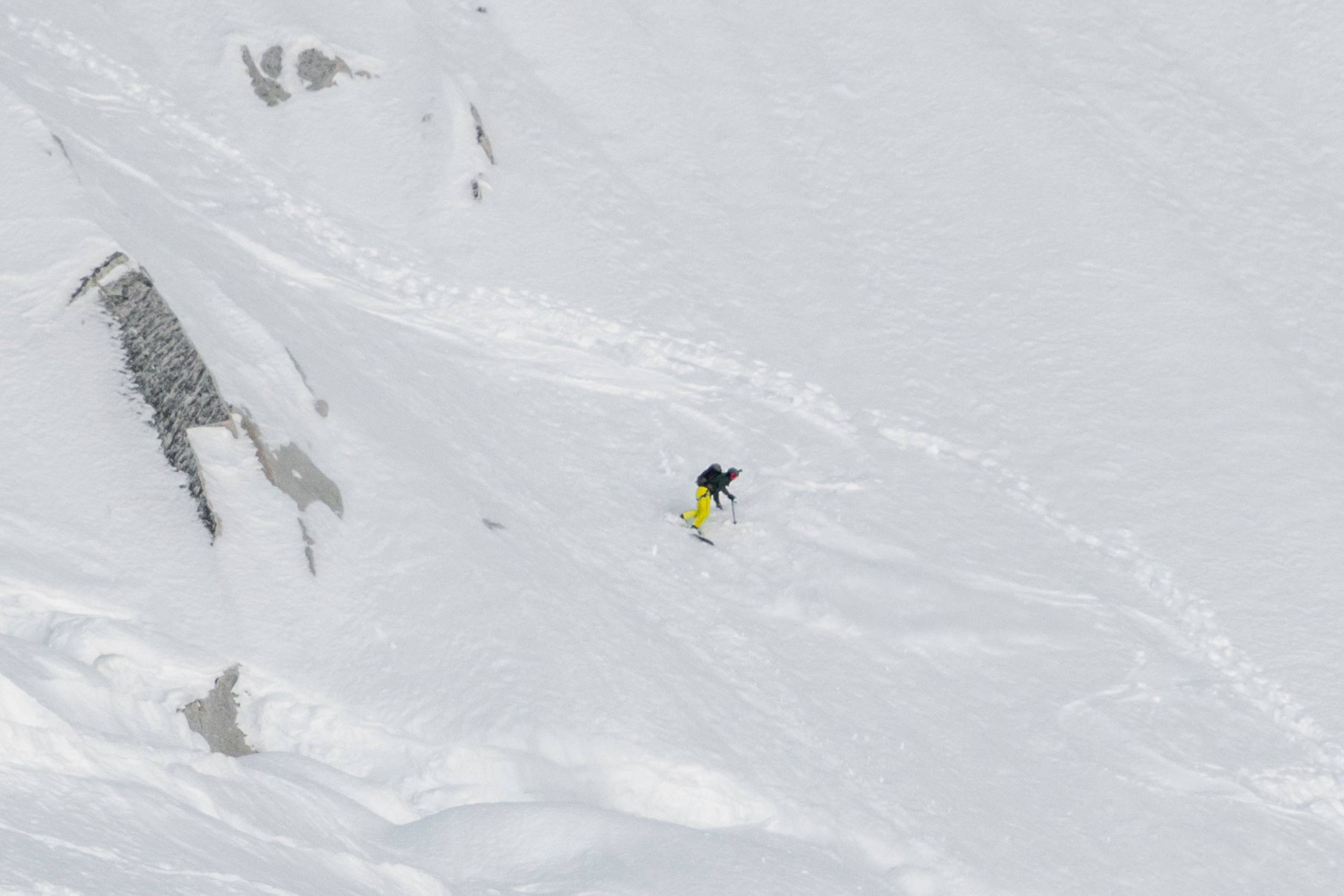 I found the Petzl Fly harness ideal for glacier travel and splitboarding. I can’t speak to more advanced or alpine intentions yet, but for my intended use, the Fly will continue to be my go-to harness.

It’s comfortable, light, and you pretty much forget that you’re wearing it while skinning, booting, and riding. Then, add in the sweet packability and the fact that you can put on the harness with skis or board on. Score.

One thing’s for sure: I’ll be stoked to throw it on here the Lower 48 whenever techier entrances or exits may be on the menu.

The Best Climbing Harnesses for Women in 2020

We tested and reviewed the best climbing harnesses for women, including top picks from Black Diamond, Petzl, Metolius, and more. Read more…