‘I was pretty sure I was about to die.’ — Hans Florine

The dire opening salvo to Hans Florine and Jayme Moye’s new book On the Nose: A Lifelong Obsession with Yosemite’s Most Iconic Climb, sets the tone for a relentless, near-fatal pursuit to conquer the world’s most iconic ascent.

An immaculate 3,000+ foot vertical face, the Nose route on Yosemite’s El Capitan is widely considered the greatest rock climb on Earth. It has made both legends and failures of innumerable climbers, including the man who has climbed it 101 times (and nearly died on his first attempt): Hans Florine.

The undisputed master of the Nose, Florine has whittled his time from 46 hours down to the current 2-hour, 23-minute record during his 101 ascents. On The Nose goes deep into the big wall’s history to uncover what makes El Capitan and the Nose route one of a kind.

The following excerpt of On The Nose: A Lifelong Obsession With Yosemite’s Most Iconic Climb by Hans Florine and Jayme Moye is printed with the permission of the publisher, Falcon Guides.

I was pretty sure I was about to die. One second before, I’d been standing on a piton, a metal spike wedged into a granite rock face some 300 feet above the Yosemite Valley floor. Suddenly the piton had shifted, causing me to lose my balance. I pawed frantically at the rock wall to steady myself.

Before I could catch either my breath or my balance, the piton dislodged completely, taking me with it. As I began to fall, I squeezed my eyes shut. This was it.

Less than 24 hours earlier, I’d been speeding northward along California State Route 41, my college roommate Mike Lopez at the wheel and me riding shotgun in a pair of Big Dog volleyball shorts and no shirt.

July of 1988 was a scorcher, with temperatures regularly hitting 100 F. On that particular weekend we were headed to Yosemite. It was to be both my and Mike’s first ascent of the Nose route on El Capitan— arguably the most famous rock climb on the planet.

It doesn’t matter if you learn to climb at the Cleveland Rock Gym in Euclid, Ohio, or in Eldorado Canyon in Boulder, Colorado, or in my case, on a big boulder in the middle of the cow field in San Luis Obispo, California. Sooner or later you’ll hear about the 3,000-foot granite cliff that presides over Yosemite Valley. There’s been more books, films, and general campfire lore generated about El Cap than anything else in climbing.

The same way that Mount Everest draws the world’s most adventurous mountaineers, El Capitan lures the world’s greatest rock climbers, along with wannabes like me and Mike. In my five years of climbing, I’d gotten the sense that there were really only two kinds of climbers in California—the ones who were good enough to climb the Nose and the ones who weren’t. I was ready to find out to which side I belonged.

Besides being a proving ground, climbing the Nose is also a pilgrimage. During prior trips to Yosemite, I’d come to understand that climbing demands a certain reverence for its history. Climbers, real climbers anyway, speak of the sport’s early pioneers, like Royal Robbins and Warren Harding, the way non-climbers speak of George Washington and Thomas Jefferson.

Real climbers know and respect Yosemite as the birthplace of big-wall climbing and consider its first ascents sacred. If climbing were a religion, sending the Nose would be like getting baptized.

The way the story goes, rock climbers began exploring Yosemite in the 1940s and even more so after World War II. By the late 1950s they had scaled all the major formations and rock walls there—except El Capitan. It was considered the most technical rock climb ever conceived, for both its steepness and its length.

Many claimed it wasn’t possible. In fact, it wasn’t until 1958—five years after Tenzing Norgay and Edmund Hillary claimed the first summit of Mount Everest—that El Cap saw its first ascent. The man responsible for the expedition—I call it an expedition because it took forty-five days over the span of eighteen months—went by the nickname “Batso.”

Warren Harding stood just 5 feet tall, but his intense blue eyes, thick crop of dark hair, and devil-may-care-demeanor made him seem larger than life. Harding set up camp in Yosemite in the summer of 1957 and, along with a small team of friends, began fixing ropes on El Capitan.

The sight of climbers dangling on the wall astonished tourists and caused so many traffic jams on the single road through the park that the Park Service initially shut the project down. Allegedly, a ranger stood in the meadow with a bullhorn and bellowed, “Get your ass down!”

It was only after Harding agreed to work on the ascent exclusively during the park’s off- season (before Memorial Day and after Labor Day) that he was allowed to resume.

In the car Mike and I bantered around tales we’d heard of Harding during our earlier visits to Yosemite. He was bold, controversial, and more often drunk than not. Yet his talent was unmistakable. Of all the words used to describe Harding, who died at age 77 in 2002, the one that resonates most with me is “visionary.”

The guy pulled off the biggest wall of them all, in a world where so-called big-wall climbing didn’t really even exist yet. The right gear for what Harding aspired to hadn’t even been created. There weren’t even plastic water bottles. He and his team used motor-oil cans to hold their water.

They lugged up hammers to bang metal spikes called pitons into cracks in the wall. In comparison, the nuts, hexes, and spring-loaded camming devices that Mike and I would carry were featherweight and slid easily into cracks, no pounding required. And they were amazingly strong. You could hang a VW bus—the climber’s car of choice—off one tiny nut.

We also had far better climbing shoes and significantly stronger ropes. I don’t know if Harding deliberated over what section of El Cap to climb or not. The cliff is about a mile wide, so he had a lot of options. I like to think he was immediately drawn to the Nose—El Cap’s massive prow—because it would have been the most audacious choice. 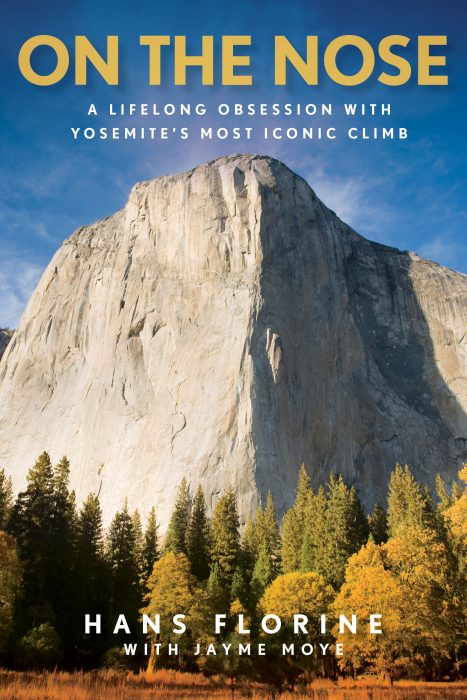 It’s pretty much smack in the center, jutting out like the beak of a parrot. And it’s visible from any vantage point in the park. The Nose wasn’t a choice for me. If you’re going to climb El Cap, you’ve got to climb Harding’s original line up the prow. Mike and I knew that much. What we didn’t know was that most teams set aside three to five days to send the Nose. Whether it was ignorance or arrogance, or some combination of the two, we were planning to climb it over the weekend. . . .

On The Nose: A Lifelong Obsession With Yosemite’s Most Iconic Climb, by Hans Florine and adventure journalist Jayme Moye, sells for $17 online).

Up Next: Climbing With Death: Honnold Gets Candid In Leto Documentary

Saving…
Climbing With Death: Honnold Gets Candid In Leto Documentary
Highpointing: Climb To The Top Of 50 States
×