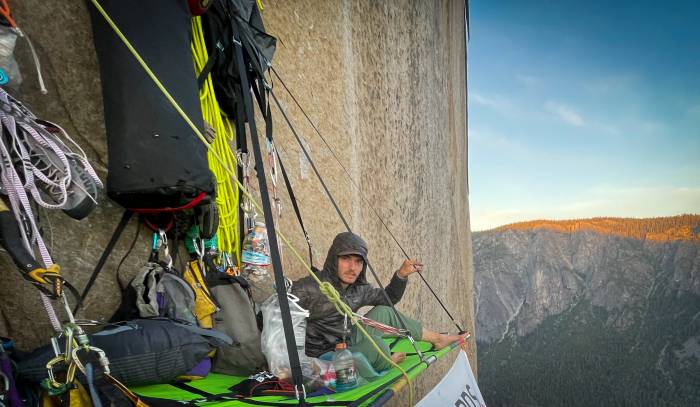 With the recent influx of climbing media such as ‘Free Solo,’ ‘Dawn Wall,’ and ‘The Alpinist,’ climbing jargon is spilling out into the general public. And the most common buzzword among climbing media is cause for some due confusion: soloing. We explain the rope solo here.

Climbers divide soloing into two main categories: free solo and rope solo. Like the movie suggests, free solo involves climbing alone without any rope for protection in case of a fall. On the other hand, rope solo refers to climbing alone but with a self-belay rope system to protect against a fall.

Between being a Climbing Ranger for Yosemite National Park and the skills learned from two seasons of work on Yosemite’s Search and Rescue team, I’ve continually honed my rope systems and efficiency, all of which have paid dividends to my climbing goals.

My time in Yosemite has given me experience on over 10 different big wall routes in Yosemite and nine ascents of El Cap. My climbing travels have taken me from sport climbing in Mexico and China to the summit of Fitz Roy in Patagonia.

So, let me explain how lead climbing a pitch and simultaneously belaying yourself works.

Editor’s Note: Rock climbing is an inherently dangerous activity. As with any outdoor sport that entails risk, you should start slow and at a level suitable to your experience. Above all, you should go with someone more experienced than you for your own safety. We do not encourage rope soloing for anyone who is not an experienced, highly skilled climber with full knowledge of safety techniques and equipment. Even so, equipment manufacturers often do not recommend their gear for rope soloing.

Similar to regular multipitch rock climbing, the first step involves building an anchor at the bottom of the pitch. However, because there is no other person to belay, the anchor is made to take an upward pull. So, one end of the lead rope is fixed to this anchor and the climber ties into the other end of the rope.

Instead of loading the rope’s end, the self-belay device catches the fall. The climber is tied into the lead end of the rope, but it isn’t a load-bearing attachment point while ascending. In this way, a rope solo climb is the opposite of a partner-belayed climb.

The self-belay device on the climber arrests the falls, not by one at the ground or anchor. And the rope slack is with the climber, not the belayer.

Should You Use Assisted-Braking Belay Devices?

There are specialized self-belay devices explicitly built for this purpose. Still, many rope-soloists also use assisted-braking belay devices, often in a modified configuration that the manufacturer does not recommend.

When using assisted-braking belay devices for a rope solo, there is always the added risk that the device could jam, fail to lock correctly, or cross-load the carabiner, as it’s not always in the proper orientation.

As the climber continues to feed out slack as they ascend, backup knots are untied from the harness to allow the next slack loop to feed out. It’s important to note that even though backup knots add security, there is still the risk of a long fall if the assisted-braking device fails to engage.

In that case, slack would feed through the whole system until a backup knot engages. This scenario could be very dangerous over ledges or close to the ground.

Once the climber reaches the top of the pitch, the next step is to fix the rope and rappel the pitch to untie the bottom anchor. While the climber will clean some gear on the way down, they will often leave some as directionals for reascending the pitch.

Once the climber cleans the bottom anchor, they reascend the pitch, usually using mechanical ascenders and webbing ladders the same way one would follow a pitch of big wall climbing.

As the climber ascends the rope, they clean the rest of the hardware placed until they are back at the upper anchor with all the gear. The climber repeats the entire process for the next pitch.

Alternatively, if the climber wants to climb the pitch again to practice moves or work out sequences, they can use a top-rope solo. Climbers can also do single-pitch top-rope solos if the top of the route is accessible and they can build an anchor.

There are many ways to set up a top-rope solo, with all sound systems having an element of redundancy built-in — if an attachment to the rope fails, a second point secures the climber.

The most common system consists of two progress capture devices that slide up the rope as the climber climbs. Again, using devices in this way is inherently more risky than partner-belayed climbing and is not recommended by the manufacturers.

If the climber spends more than a single day on the wall (which is typical for this type of climbing), they will have to haul up bivy gear.

The involved, complicated nature of rope solo climbing draws a particular type of climber, one who is in it for their own experience and enjoys taking on the added responsibility. While certainly not for everyone, rope solo climbing can be a unique way to experience rock climbing for those up to the challenge.