Wake up, climbing nerds! The moment you’ve been waiting for has arrived. Stefano Ghisolfi posts his first-ever YouTube Q&A. Guess what it’s about?

It’s hard to find an analogy in conventional sports for the upper limits of climbing grades.

Difficulty in climbing is inherently more subjective than the score in a stick-and-ball game or the time in a race. With so few climbers capable of even attempting these herculean routes in the 5.15 range, they retain an enigmatic quality.

But in his latest YouTube vid, Stefano Ghisolfi does his level best to erase the mystery surrounding “Silence,” a 5.15d/9c route established by Adam Ondra in 2017.

In the 5 years since, “Silence” has remained unclimbed, its superlative difficulty still known only to the Czech phenom who established it.

But with characteristic chill, Ghisolfi explains that he’s already done each individual move. While he described some sections as “not that hard,” he also answered the biggest question of all: Is “Silence” a real 9c?

“I have to give 100 percent … It’s a weird route,” he said. “You have to learn to jam with your hands and your feet, and this makes probably ‘Silence’ a real 9c.” 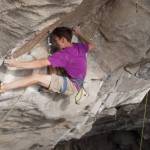 If Stefano Ghisolfi sends 'Silence,' he’ll be the first climber to repeat the first route graded 5.15d anywhere on the planet. Read more…