Trango released the Stratus in March, its first bouldering crash pad. The foam is the only energy-absorbing component of a bouldering pad, and Trango nailed it.

The development team at Trango made magic with their particular concoction of foam. The result? According to our Climbing Editor, the combination of closed-cell and open-cell layers of foam in the Stratus produced the best landing surface of any pad he’s ever tested. And he’s tried tons of them, from the original Cordless designs to the much-adored Organic 5″ Thick Big Pad.

Our climbing editor and his crew of dirtbag bouldering specialists tested two pre-production samples of the Trango Stratus for 9 months. They schlepped and landed on them at the pebble wrestling crucible of Hueco Tanks, Texas, across alpine boulder fields in Crested Butte, Colo., and the stiffly graded local boulders in and around Austin, Texas.

The pads did duty under sit-start problems that traversed, where the crux was keeping feet from dabbing and harrowing highballs. The Stratus also served daily use under training boards. In short, the Trango Stratus’ ability to absorb impacts proved second to none.

In short: The Trango Stratus earned its spot as the crash pad of choice due to its superb energy-absorbing ability. It didn’t matter if the boulders were tall or short or if the climbers were big or small. The Stratus became the most trusted and desirable pad out of my extensive collection for my crew and me.

It’s All About the Foam

Most pads in my extensive collection utilize the closed-cell/open-cell/closed-cell foam sandwich in some fashion. But the alchemy of Trango’s foam densities and thicknesses combine to produce the mix of compliance and stiffness that handily absorbed even large impacts while providing a stable landing platform to prevent rolled ankles.

The denser top layer provided a consistent and stable feel for landing and standing. It didn’t change or degrade in any way during the entire testing period. I’ve had pads get divots, grow softer in the middle (where they get the most traffic with proper placement), or compress quicker in the most landed-on areas, but not so with the Stratus.

The thickest, middle energy-absorbing middle layer thwarted bottoming out, even under our heftiest crew member. He’s at least 185 pounds and lands in the exact position he had when he touched the last hold, even off tall problems with plenty of air time.

And he happens to be our boldest member, the one that will try the most towering boulder in the area. And when we had a collection of pads to choose from, this monster of a boulderer put the Stratus dead center in the LZ.

The thinnest closed-cell layer on the bottom dispersed any “hot spots” from rocks or roots on the ground. And it helped prevent bottoming out the entire energy absorption system on the most significant hits. It also helped mitigate any gaps on the ground in the landing area.

Trango uses ripstop nylon for the Stratus cover, with reinforced corners and metal hardware to improve durability. The nature and venues of bouldering are abusive to crash pad covers.

However, the Stratus didn’t pop a seam or show any signs of damage from abrasion throughout the testing period, which put the pad in use at least twice a week. The buckles, although scratched, maintained their functionality and shape, even when stomped on by our colossal team member.

A kangaroo pouch allowed carrying essentials and accessing things like guidebooks and snacks without having to dig into or unfold the pad. This pouch has long straps with abundant buckles that were confusing initially, but they allowed piggybacking two Stratus pads together into a seamless unit for projects requiring lots of pads.

The shoulder strap height was adjustable via a ladder system, while the hip belt offers adjustment on both sides. Fitment wasn’t an issue for anyone outside our shortest crew member, who stands a diminutive 5’1″ tall.

The straps, although functional, weren’t the most comfortable. They were lightly padded and contoured, but they could use more of both for a plusher feel. At a verified weight of 13 pounds, 6 ounces, the Stratus isn’t a light pad, and piggybacking them made this shortfall even more apparent.

Three drag handles made moving or adjusting the pad’s position easy. Finally, a handle between the shoulder straps aided in hoisting the pad into position for placing on the back. 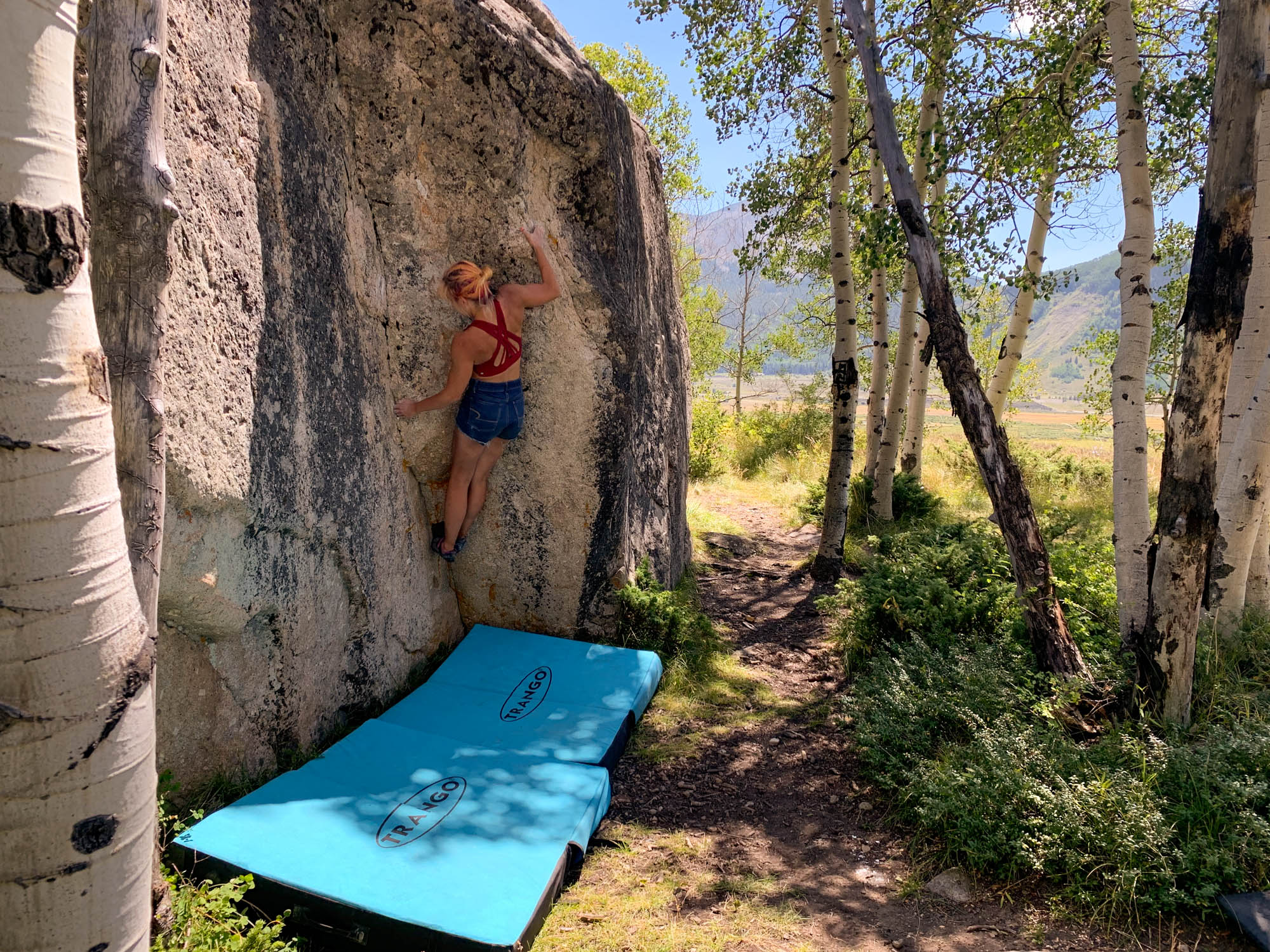 The primary function of bouldering pads is to absorb ground impacts, and in this regard, the 4.5-inch foam layup in the Trango Stratus proved unbeatable for this tester. Not only did the pad protect our heaviest member from the tallest landings of the testing period, but it also proved a stable platform, with zero ankle turns thus far.

The kangaroo pouch, with its double-carry ability, was also functional and appreciated.

The main ding was the shoulder straps. An improvement here would be welcome. But, when the problems are tall, or the landing is sketchy, I’m still bringing the Stratus every time.

Overall, the Stratus’s foam made it the pad of choice regardless of boulder height, climber weight, or landing zone characteristics. And this was when a full array of pads was available, even ones designed explicitly for highball problems.

I realize this is a bold statement, but I stand by it. I have complete confidence this will remain true until I test something better, and I’m always looking for something better due to a strong drive for self-perseverance.

Editor’s note: Trango plans to release a more economical crash pad (the Cumulus) and a high-end version, which will have improved suspension components (better-padded shoulder pads and hip belt).

Bouldering on a Budget? This Is the Pad for You

Metolius stripped down its Session II Crash Pad to create the Basic Pad, released last week. The big news is the price; with an MSRP of $130, the Basic Crash Pad becomes the least expensive crash pad that is legitimately effective — and free shipping makes it even more enticing. Read more…

Up Next: IFSC World Cup: Gold for Garnbret & Ondra, Plus Another Speed Record in France