After two recalls, Trango re-released what it calls ‘the world’s most ergonomic belay device.’ So we put the Vergo assisted-braking belay to a first look test.

The Trango Vergo initially launched in July 2016 to much fanfare. Trango touted the Vergo as an assisted-braking device that placed ergonomics first. It was constructed in the most natural and safe way a climber would hold it.

This statement seemed to be a jab at the unprecedented leader of assisted-braking devices, the Petzl GRIGRI.

Belay devices are experiencing a renaissance of sorts, with more innovative options on the market than ever. Here, we review and recommend the best assisted-braking belay devices for rock climbing. Read more…

But just as the Vergo started to gain momentum, it was recalled in April 2017. The recalls involved malfunctions with the lowering handle. Trango addressed manufacturing comprehensively, and replacement units weren’t shipped out until January 2019.

In short: The Trango Vergo, $100, is an assisted-braking device that feeds slack without manipulating the lowering lever. And during falls, the Vergo reliably locks down. You don’t have to defeat spring tension, and it holds a climber in a static position without slipping or requiring brake hand tension.

Like the Petzl GRIGRI, the Trango Vergo does require learning different techniques. And until the belayer masters these methods, it can be frustrating to release slack after the device has locked. 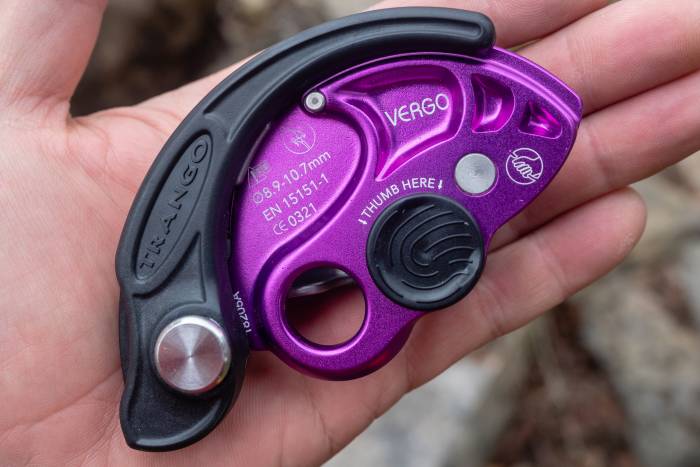 Loading the Vergo is simple. Cast markings indicate the climber and brake sides of the rope.

To load, pivot the faceplate and expose the rope track within the backplate. Then, place the rope in the track while holding the lowering lever open. This extra step, holding the lever, was a nuisance at first, but I quickly forgot about it.

Petzl Introduces the newest member of the GRIGRI family, the GRIGRI+. We got a chance to try it at one of the world's foremost climbing gyms. Read more…

A “left” arrow indicates the proper clipping direction, which is “upside down” compared to the GRIGRI. And the instructions also state to flip the locking belay carabiner so the Vergo is positioned on the smaller side, also the opposite of other belay devices. A correctly loaded Vergo creates a half twist in the belay loop of the harness.

The Vergo has an embossed thumbprint on a cap covering the main pivot and an index finger groove on the backplate to give a tactile indicator for correct grip. Holding the Vergo properly felt natural after only a few belay sessions.

How to Belay: Trango Vergo

The belayer pinches the device between thumb and forefinger, with the remaining three fingers holding onto the brake strand.

Unlike the GRIGRI, no looping or redirecting of the rope is required; the rope exits the Vergo and falls into the brake hand.

Pinching the device also ensures it breaks free of the thumb and index finger during a fall. It allows the two plates to pivot unrestricted, camming the rope.

The Vergo feeds and takes up slack freely; the feeling is second only to the Wild Country Revo. 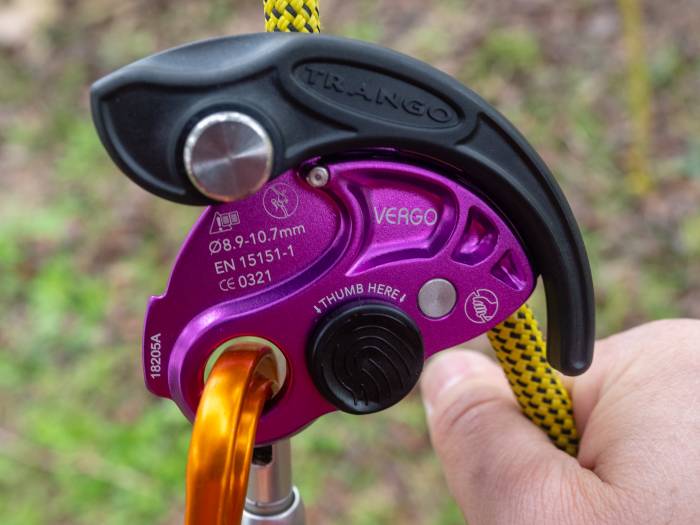 One main difference is the belayer doesn’t direct the slack toward the climber. With the Vergo, slack is fed horizontally to the left. This took a few rope lengths of practice to become second nature.

What didn’t come so easily was releasing the rope once it had become locked between the plates. To free the rope, a belayer must use their left hand on the device to slightly rotate the plates.

It was difficult to remember when panicked after short-roping the leader. The usual response is to quickly yard slack with the left hand. But the issue is further compounded due to the lowering handle, which the brand designed to keep the camming mechanism unrestricted and guard against interference.

This safety design means users need to access a very specific area of the Vergo in order to free the rope. As imagined, it’s stressful to both the climber and belayer until the correct unlocking action is mastered. 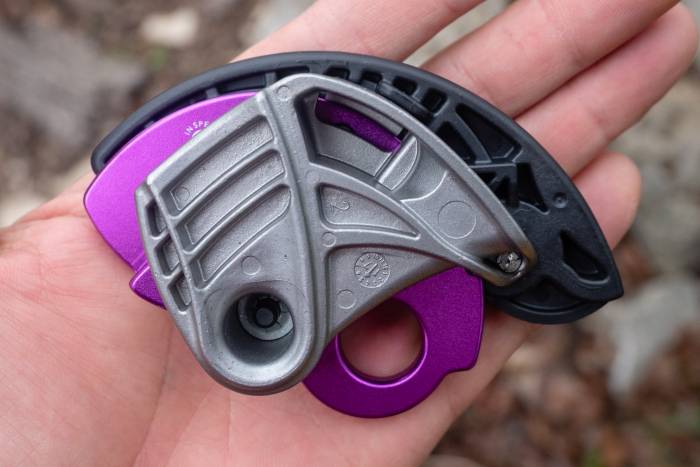 Lead fall catches initially felt harsh because there is no spring pressure to overcome. The plates cam instantaneously; a soft catch requires practice.

Lowering felt similar to other assisted-braking devices: Particular care was prudent during the initial pull of the lowering handle to prevent rapid falls. The long lowering handle did get crossed onto the opposite side of the lead strand once, but the correction was easy, and it never happened again.

The MSRP $100 Trango Vergo is a tad smaller than the Petzl GRIGRI and weighs just a touch more, at a verified 7.1 ounces. It accepts ropes from 8.9 to 10.7 mm, is assembled in the USA, and is CE- and EN-certified. The Vergo is available in four anodized colors.

Trango Vergo Review: Is It for You?

Time will tell if the Vergo replaces the GRIGRI as the victor of the assisted-braking wars. It offers excellent slack feeding and take-up as well as and comparable size and weight. But the Vergo does have a bit of a learning curve.

With more practice and use, the Vergo has the potential to sway GRIGRI users. And with the attractive price, it may appeal to new assisted-brake users.