Adventure racing puts gear through the wringer like no other outdoors sport. Constant use over days in the wilds, in extremely harsh conditions, leads to the ultimate testing environment. 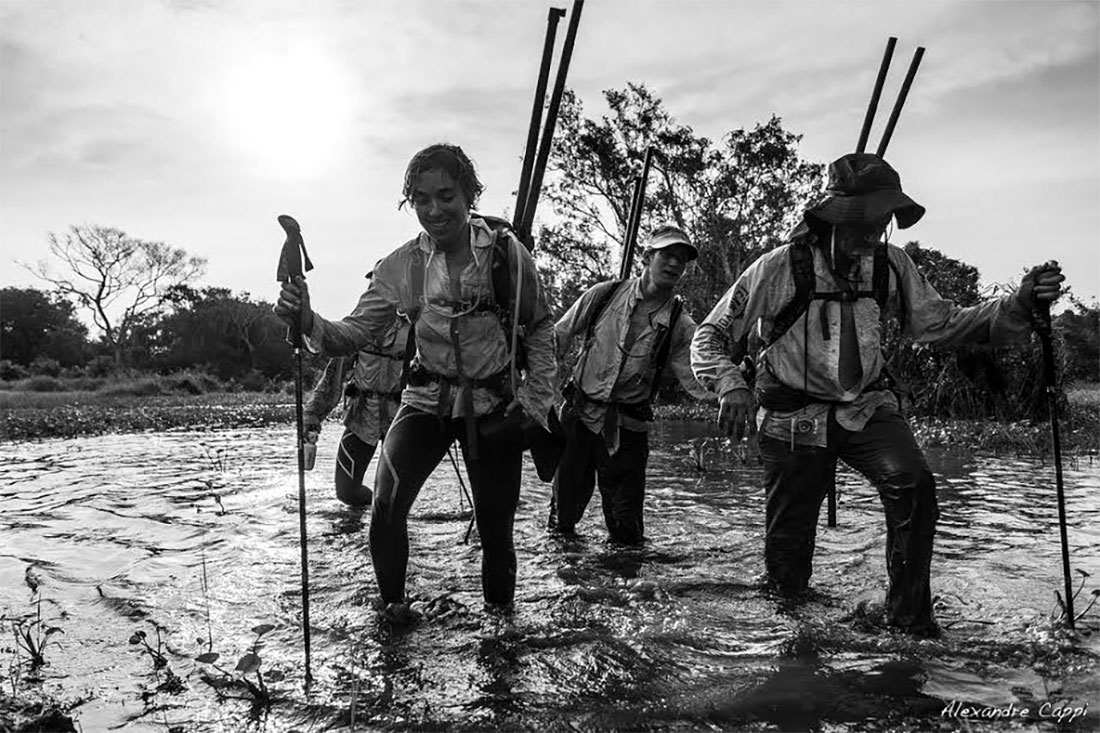 Last month, Team YogaSlackers raced in the Adventure Racing World Championships in Brazil, a week-long event through jungles and swamps. Here’s a breakdown and roundup review of the gear that got them through.

These pants and shirt saved us from being (as one local guy explained to us) “raped” by the mosquitos and exposed to the intense sun. An insect-repelling treatment combined with the UPF protection and light weight fabric made these pants and shirt stand out against any other trekking garments we have used. We were relieved and excited to be able to just pass out in the middle of the jungle and not have to douse ourselves with deet to keep the bugs away. Instead we were able to just cover everything up with our insect shield gear and get some solid sleep. The active ingredient in the garment is permethrin, an invisible and odorless repellent that is guaranteed to last the life of the garment. (Men: Sandfly Pant — $80; Breezr Shirt — $85; Women: Damselfly pant — $80; Breezr Shirt — $85)

This jerky kept us alive in some dire times in the jungle. The salty, grass-fed chunks of moist beef helped us replenish electrolytes, and the flavor kept us happy rather than thirsty like some dry jerkies we’ve tried. We would actually suck on each piece to get the most out of what we had. It was a coveted item in the food bags for sure, only broken out for special times like the top of the next peak, halfway through the leg, and in transition areas for a hit of protein and needed salt. Our favorite flavor was “hot,” as it kept us awake during the night! ($40 for a sampler pack)

First of all, who doesn’t like an excuse to bring a machete with them in a race? This machete allowed us to break our own trail, rather than constantly getting caught up in the thorny vines. This helped us stay sane. A few times it was truly the only way to make forward progress. 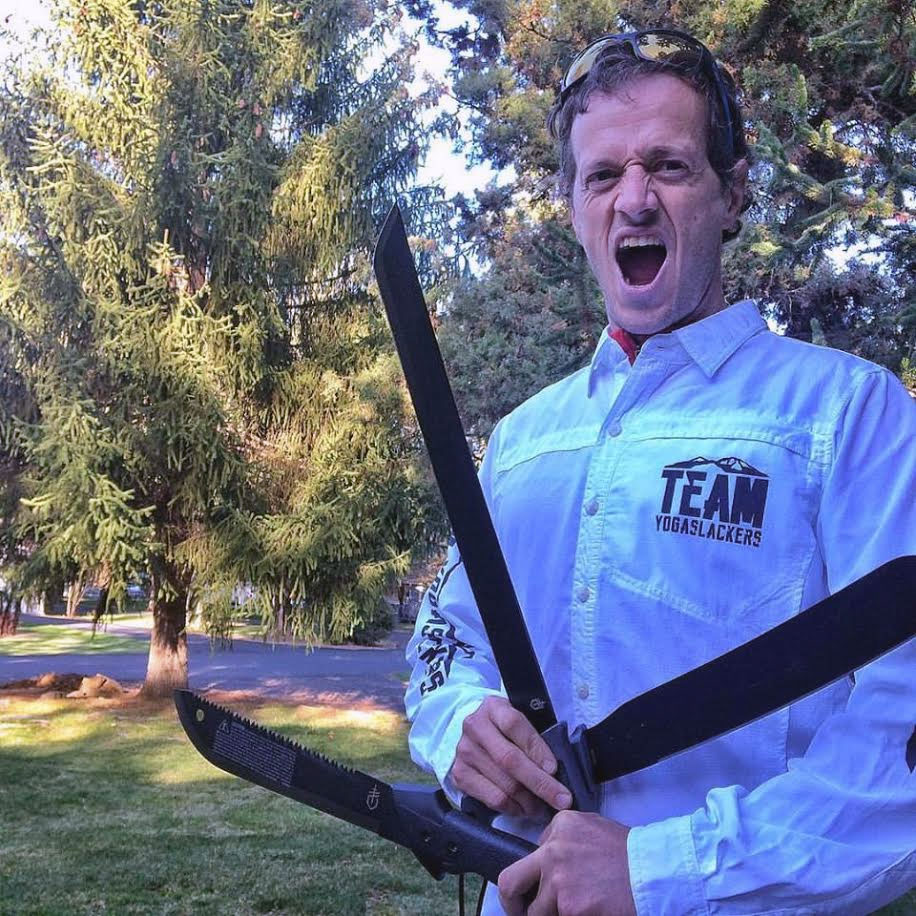 Unlike other machetes that are heavy and start to dull after a couple uses, this one swung, sliced and lasted throughout all of our long jungle treks. We actually started to look forward to the wild dense jungle, as the front person could take out some aggression while breaking trail!

Gerber sells a range of machetes. This one has a stout, 18.9″ blade, overall light weight of 18.7 oz, and a comfortable handle with Greber Gator grip tape. All this makes the Gator our machete of choice and a top of the list item for jungle gear. (More info: Gator Bush Machete.)

Sandals seem like a crazy idea for a jungle trek, but after day 3 of being on our feet for the greater part of the race, we were all sporting some serious blisters! The Luna Sandals provided some amazing relief and a chance to dry our feet out while still being able to trek and move forward. Unlike other sandals, the Lunas are made specifically for epic adventuring, including running and ultras. They stayed on and were very comfortable, which is all we could have asked. We will never do another long race without these in our bin or on us at all times. Lunas are ultra light and have a great story to back them up. This style of sandal has been used for centuries by hunters, runners and adventurers all over the world. (Luna Oso Sandals — $105)

Ok, these wing-blade paddles are great for endurance paddling. We knew that going in. But what surprised us was their incredible durability. We were forced to carry paddles for over 50 miles of trekking. 10 of these miles were dense, rocky jungle bushwhacking with steep ascents and descents. 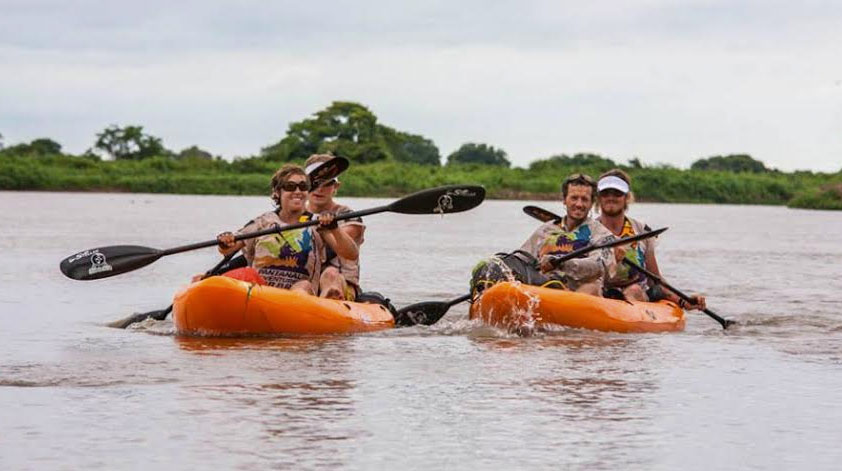 The two-piece paddles sticking out of our packs would catch on everything, making progress agonizingly slow. Fatigue and frustration led us to carrying the paddles in our hands, and eventually using them fully as poles. Yep, we used our very expensive carbon fiber wingpaddles as trekking poles. We abused them. We caught falls with them, tumbled down slopes with them. We were sure they would break. We were wrong. Thanks Stellar. (More Info / Buy Now — $435)

Good protein bars are hard to consume sometimes, especially when almost all of your calories are coming from bars, chews and gels for days and days. These not only tasted amazing, they also felt good in the mouth! In the ProBars, all of the ingredients are recognizable and taste real: The chocolate tastes like chocolate, the peanut butter tastes like peanuts. We used them as our protein packed meals in the transition areas, either before taking a rest or right after getting up. Our favorite flavors were the coffee and chocolate super greens, all loaded with chia, flax, 20 grams of protein, and 7 grams of fiber. ($34.50 for a variety pack)

This hat was crucial for keeping us cool, covered and protected from the intense sun rays, especially on the exposed mountain ridges and long paddling sections. The many features of this hat include: UPF 50 sun protection, wide front and side brim, lanyard to keep it on in the strong mountaintop winds, and a 7.5 inch flap to keep the neck protected — all in a super lightweight, packable, water-shedding fabric. This item did more for keeping us moving without succumbing to heatstroke than any other. (More Info / Buy Now — $39)

Our secret weapon against the inevitable dip in morale that comes during these intense expeditions is music. Rather than have each of us retreat into our own world with headphones, we prefer to all listen together. We tested three different devices in the jungle, and all were successful, with a few different strengths. All of them are rugged, waterproof, and bluetooth compatible.

Nuu Riptide: The lightest of the bunch at under 6oz, the Riptide is also the least expensive at $29.99. So it is a great choice for carrying all the time. It does have the shortest battery life at 6 hours, but a surprisingly good sound, and it comes with a carabiner to clip anywhere.

Outdoor Tech Buckshot: Heavier at 9oz and more rugged, the Buckshot ($39.99) lasts for 16 hours on a single charge, and it comes with a simple handlebar mount. The sound is adequate, but it has the least volume of the three tested.

EcoXGear EcoPebble: The most expensive ($59.99), this speaker is also the most robust. It is fully submersible, totally rugged, and the loudest of the three — in a small but mighty 8oz package. It boasts a 7 hour battery life, a short 2.5 hour recharge time, and a carabiner attachment.

Up Next: Insane! Watch The Gnarliest Race On Earth

Saving…
Insane! Watch The Gnarliest Race On Earth
Videos Give Inside Look At ‘Last Wild Race’ In Patagonia
×