At age 9, Hannah Carter is no stranger to endurance sports, with her father a dedicated adventure racer who often trains with his kids. Last month, Hannah joined her dad for a 6-hour wilderness event. 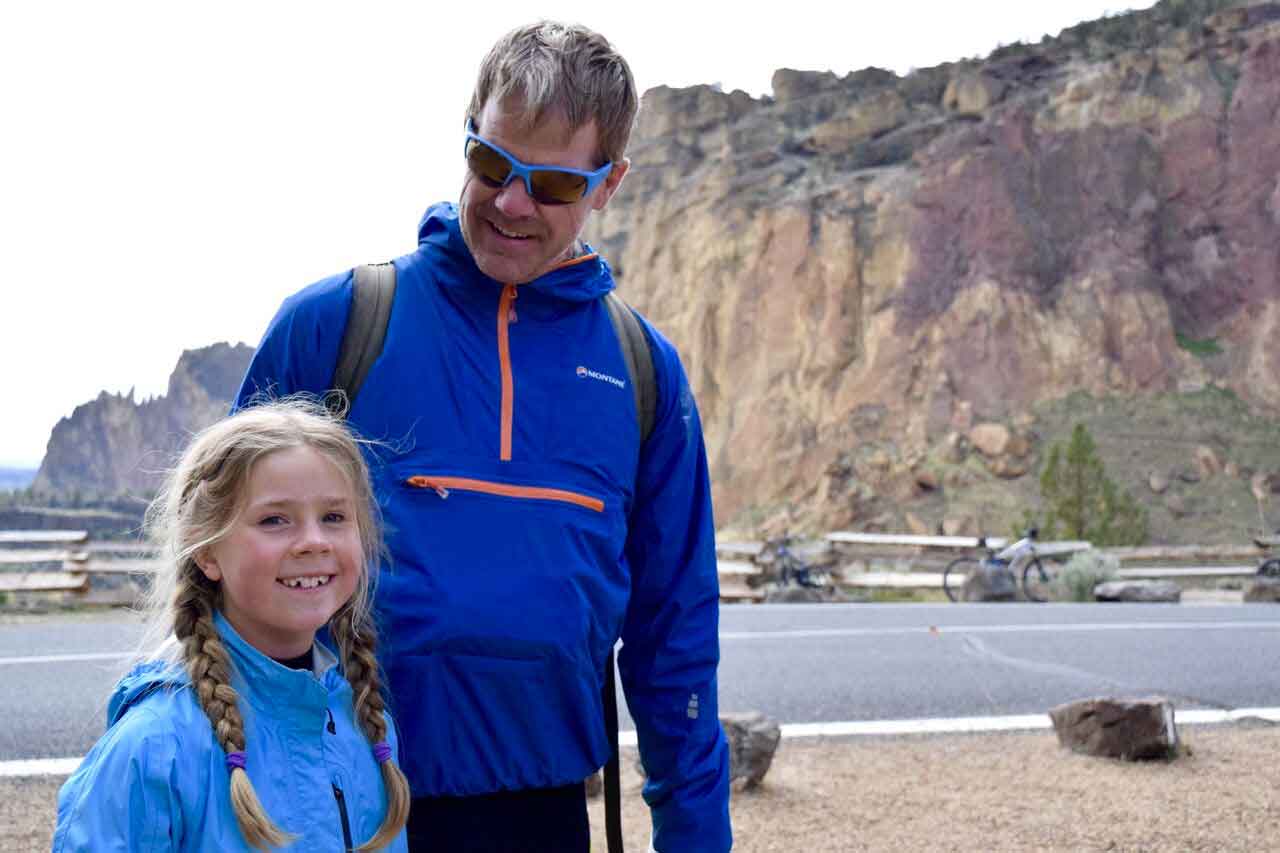 The start line at the Spring Sting Adventure Race last month in Oregon was stocked with the usual suspects. As the season’s first regional race for the USARA series, teams were vying to secure an early spot in the National Championship to be held in October. Others were hoping for a good finish or simply trying to clean off the rust from winter hibernation.

Scanning the array of Lycra-clad multisport teams there was a sudden dip in the lineup — 9-yr old Hannah Carter. Dwarfed by both the surrounding adults and the towering peaks of Smith Rock State Park, it was easy to miss her.

Hannah’s dad, Adam, usually races on Team YogaSlackers – and he won this race last year as part of that squad. This year, he petitioned to be able to race with his daughter. “She actually asked me,” he corrected. “After years of pushing and pulling and towing Hannah and her younger sister around as part of my training, she wanted to race with me.” 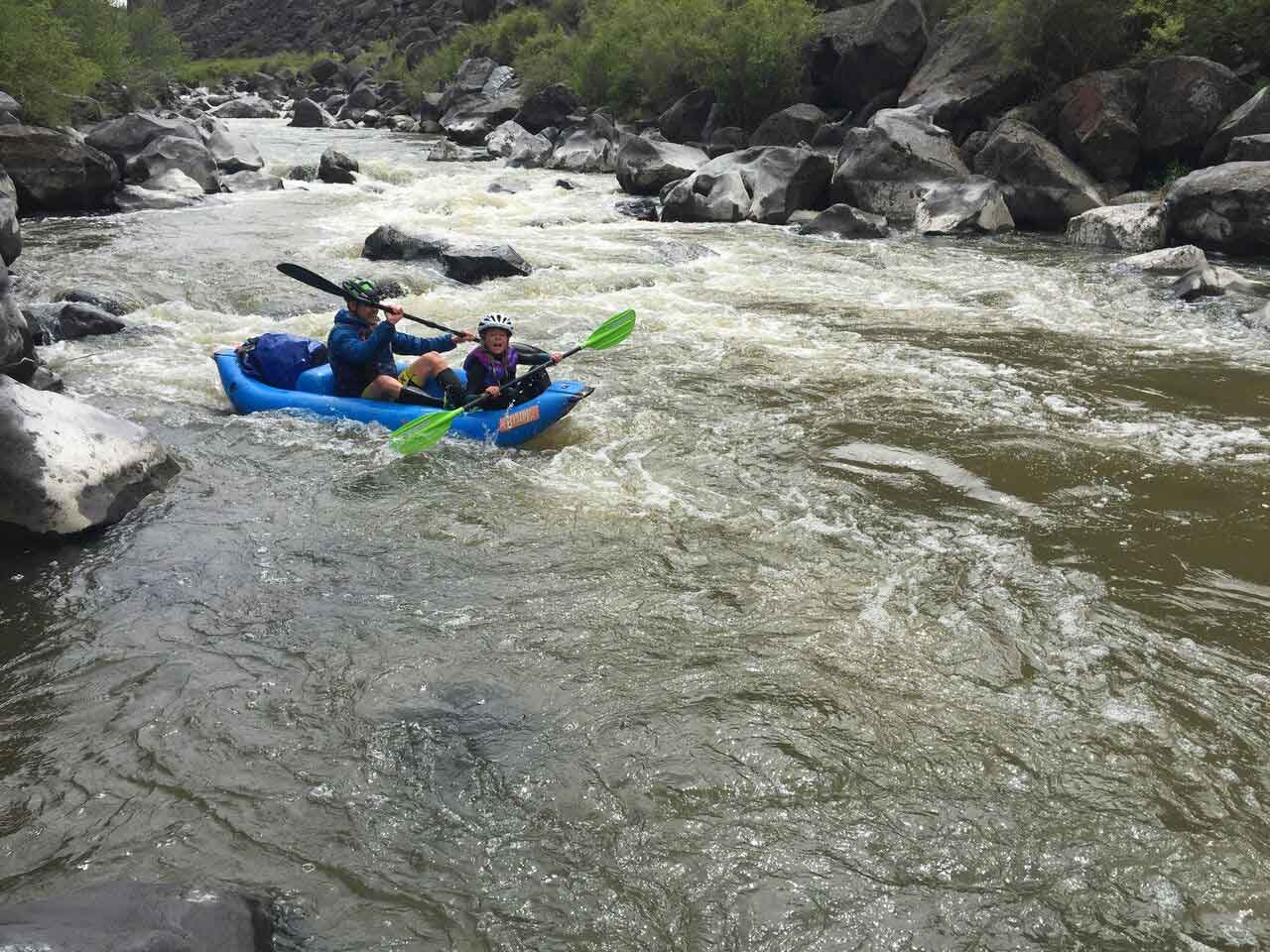 The Spring Sting race directors were reluctant at first. The course is serious, with three river crossings, miles of technical singletrack biking, exposed rock-scrambling, class III whitewater, and over 3000′ of elevation gain. But based on Adam’s experience, and Hannah’s enthusiasm, they eventually acquiesced.

Team “Hannah and Dad” finished in 6 hours 59 minutes, taking 10th place out of 15 teams. Hannah was cold and exhausted — she fell in the river at the beginning of the final whitewater leg — but they were all smiles at the end. “When is the next one?” she asked, even before they crossed the line.

GearJunkie caught up with Hannah after she’d had a few days to rest.

The race was on a Sunday. Did you have to wake up and go to school Monday morning, or did you get to sleep in?

Hannah: I got to sleep in, but I did still have to go to school.

What made you want to do this?

I don’t know. I guess it sounded fun. I like scrambling, biking, and especially boating.

What was the most fun/exciting part of the race?

Falling into the river.

Falling in the river.

Isn’t that the same answer?

Food! Because my dad said I get to eat the whole time. And a wetsuit. It kept me warm when I fell into the river. 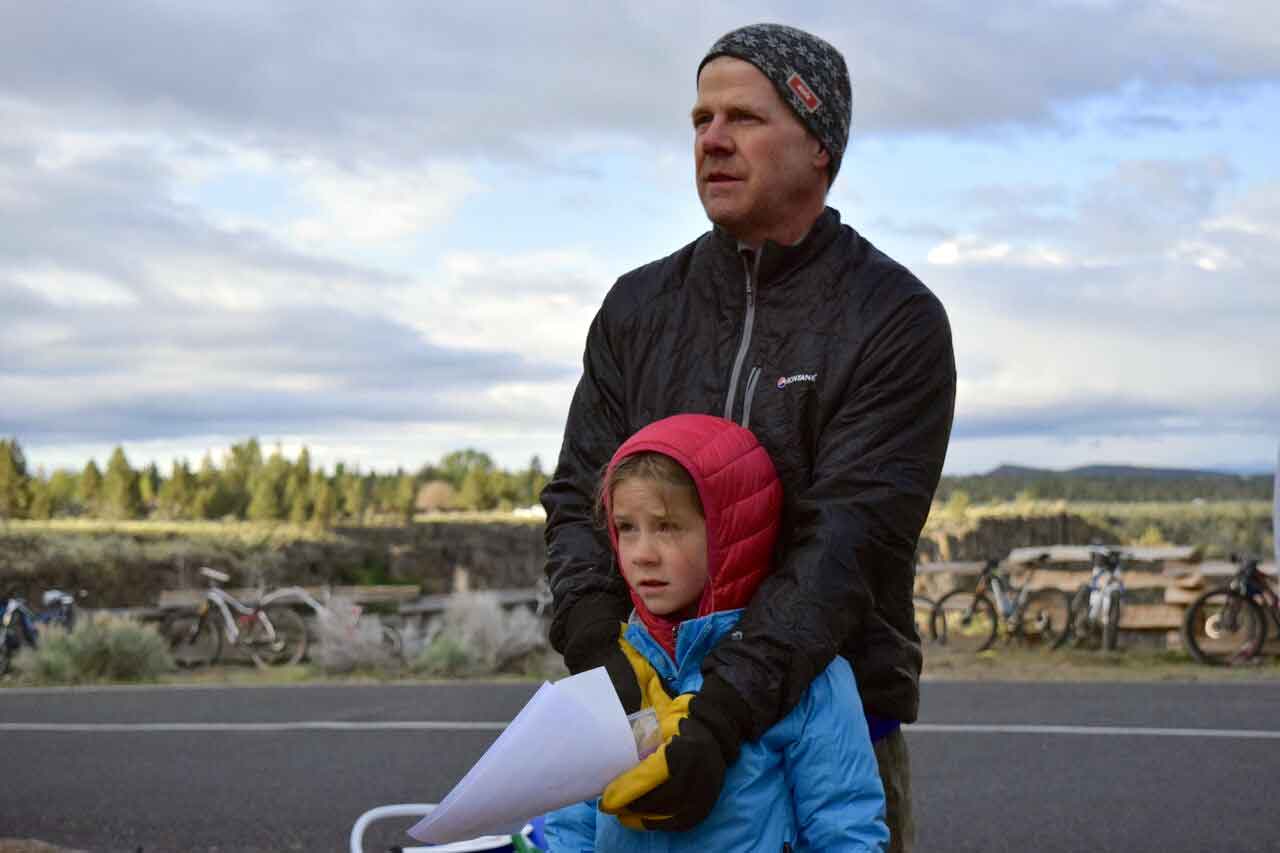 What do you think your dad could do next time to go faster?

Maybe use a smaller raft. It took forever to take it down the cliff. He also could have kept the trailer bike attached to his bike in the deep river crossing. That would mean he only had to make two trips, instead of three.

What advice would you give to other kids wanting to do an event like this with one of their parents?

“Try and find someone who actually wants to do one. If the grownup doesn’t, they might go very slow and you might not make it up all the hills. It’s hard making it up the hills when you are going slow. It might not be as fun with someone who doesn’t necessarily want to do it. But it’s super fun!

What did it feel like to finish the race?

What were your goals going into the race?

To have fun. To get wet. To make it to the finish.

You had a little mishap after the race?

Yes, look out because afterwards you might be really tired and bonk your head on things. [Hannah misjudged climbing into the bottom bunk bed at home and hit her head pretty good; she ended up with a “nice little goose egg,” said dad, “which is funny because she got through the race without a scratch.”

As an experienced racer, what changed as far as perspective and goals during this event with your daughter.

Adam Carter: When I do a race like the Cowboy Tough with Team Yogaslackers, we are racing for the podium. Success comes from winning, or doing everything we can to win. Hannah and I had different goals. Number one was to have fun. That was my job, make it fun. And not surprisingly that made it more fun for me. We kept moving, but didn’t sprint. We decided to skip a couple of checkpoints, but didn’t worry about it. We took an inflatable kayak instead of a packraft so we would be more comfortable in the whitewater, but didn’t care about the extra time it took to carry it up and down the cliffs and trails to get to and from the river. OK, I did because it weighed a ton, but it was worth it.

How outgoing is your daughter? Had she noted interest in racing before?

Folks who just know me aren’t surprised that my daughter is racing, but that’s funny if you actually know her. She is not “that kid” on most days. She would choose playing Legos and listening to an audio book over a bike ride. Ballet is as important as paddling, and she would always choose comfy sweats over Lycra. But, she loves adventure, and maybe that’s partially because I do and it has rubbed off. So when she said that she wanted to race, I couldn’t have been more excited.

How did you train with her?

Our training was mainly based around making sure that she was comfortable with all the possibilities. We took a bike ride and did some hiking and scrambling in the middle. We hiked up the local mountain with our backpacks on to get the feel of that. We went to the local whitewater park and did laps on the Class II section to test our wetsuits. We looked at maps and talked about how our day might look. I tried to help her understand that even though things would be unpredictable, they wouldn’t be unknown. We did things we always do, but we called them training. 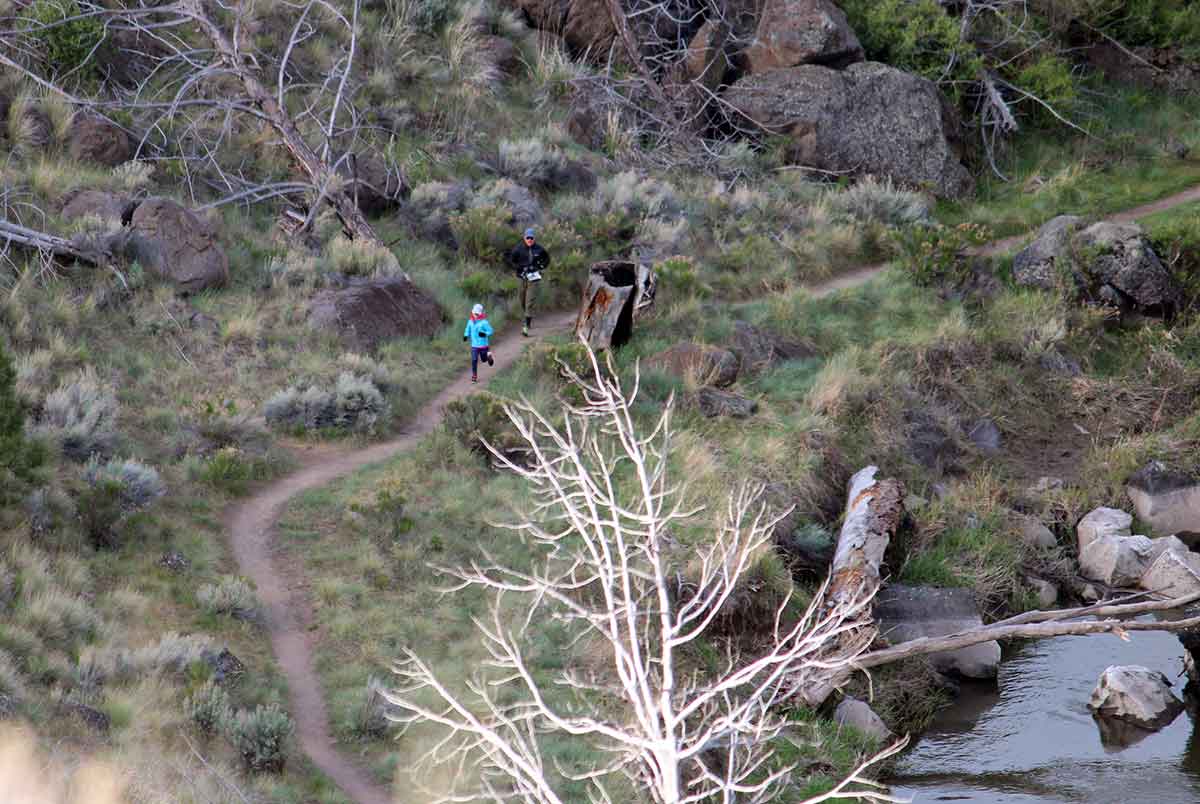 How did you feel on race day?

Race day was a new kind of nervous for me. I always worry about how I am going to do in an adventure race, and I also worry about the team too. When your team is your own child, it changes everything. As we were looking at the course map and I was making a plan, everything in my mind was broken down into short steps. Get through the first river crossing with dry feet (hers, not mine). Do the long bike section first so we can scream back downhill if the weather goes south. Choose the easiest checkpoints on the trekking section. Be careful scrambling down the cliffs. Stay in the boat in the whitewater (most of the time). Every time we would pass an obstacle, I would feel better.

How did the race go once you started?

Hannah raced for seven hours without complaining. Ok, she didn’t like the navigation error I made that cost us five minutes, but that was a valid complaint. She spent the race smiling, snacking, laughing, and hanging out with me, and I can’t think of a better way to spend a day.

What advice would you give other parents?

Go for it. Know it’s a risk, but assume success. There will probably be tears. Keep smiling. Holding hands is totally allowed. Bring more food than you think you need. Let them eat whenever they want. Stop at cool viewpoints. Talk a lot. Take a moment to soak it all in. Be proud of whatever happens because they chose to try. You can pull a trail-a-bike on some pretty serious singletrack. Remember, you want this to be the first race they do with you, not the first and last. Bring a warm, fuzzy hat. Nothing is as important as having fun with someone you love. Be proud of what you are doing together. Take a before and after picture. Race at the speed of fun! 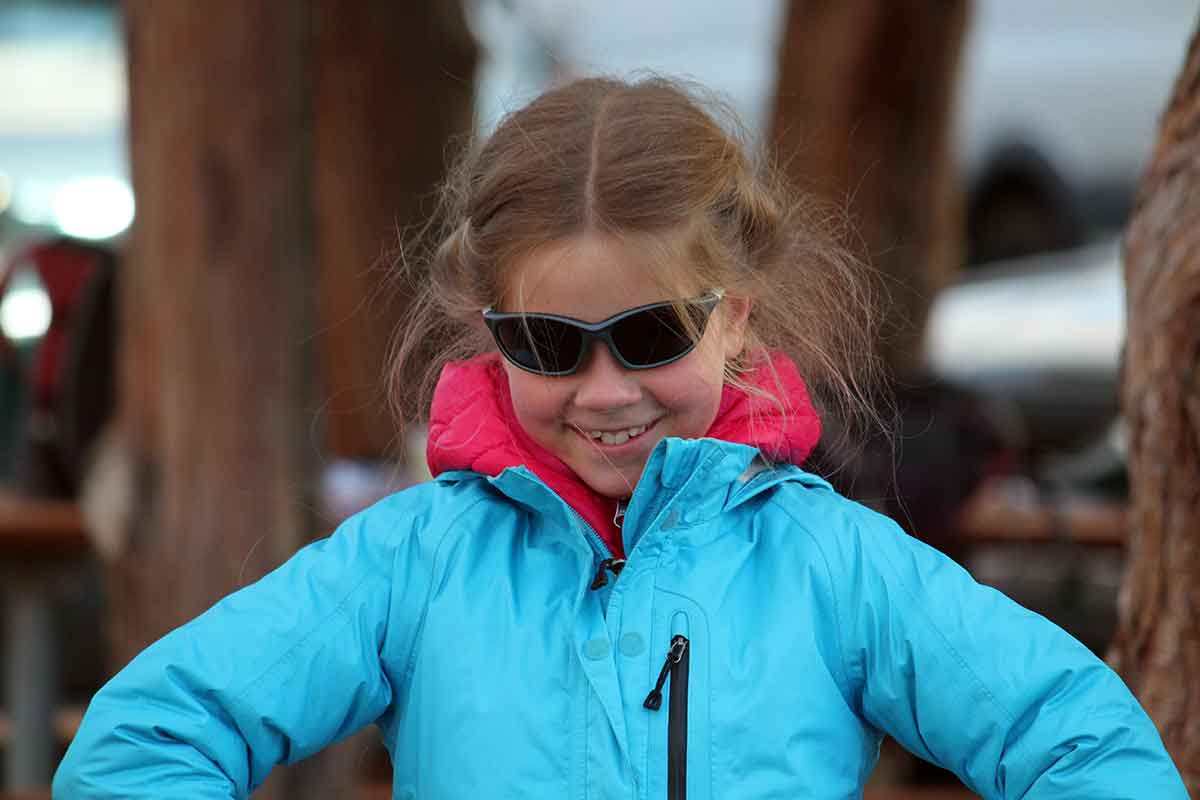 Up Next: ‘The Runner’ Seeks Contestants For $1Million Race