Running 240 miles is no easy feat. Doing it faster than anyone ever had before is otherworldly. We interviewed Courtney Dauwalter and got the scoop on the gear she used during her record-setting run. 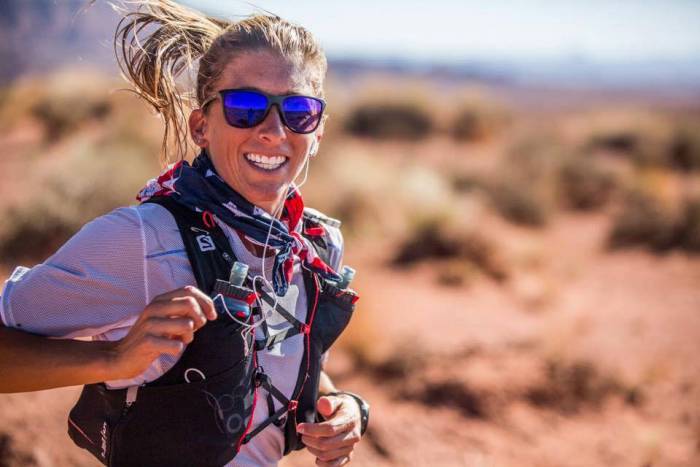 Fifty-eight hours on foot takes a toll. Recently, I hosted Dauwalter on my podcast, TR Talk. Being a gear junkie, I had to know the nitty-gritty details of the equipment Dauwalter used to cross the Moab Desert.

Dauwalter won the Moab 240 in October with a dominant 10-plus-hour delta over the second place finisher. The course wound itself along the Colorado River in southeastern Utah.

It crossed into Canyonlands National Park and through the Abajo and La Sal mountain ranges. She completed the run in 2 days, 9 hours, and 59 minutes, ascending 29,467 feet along the way.

In total, Dauwalter used 14 pieces of equipment during the race. Note: Salomon sponsored the Moab 240 and also sponsors Dauwalter. Thus, she largely uses gear from the brand. But her choices give some direction to ultrarunners shopping for new kit.

Meet the Unknown Woman Taking the Ultra World By Storm

Could this 31-year old school teacher be the next great ultrarunner of our time? Read more…

It’s worth noting that Dauwalter would meet her crew in the afternoon so that she could load up with the mittens, hat, and layers, as evening temperatures dropped to 9 degrees F – as if the race wasn’t hard enough already!

Dauwalter’s mental toughness is incredible. After talking with Dauwalter a week ago, we are fired up and ready to train. The full podcast is available here and also on SoundCloud, iTunes, Stitcher, and Google Play.

Ryan Warner (@Ryan_N_Warner) is the co-host of TR Talk Podcast, which interviews leaders in their field to learn how millennials can make an impact in today’s operating environment. Former guests have included CEOs, sports psychologists, New York Times bestsellers, self-help gurus, and former / current professional athletes. If you want to support the podcast, have a listen and feel free to recommend guests in the comments below. Contact Warner online here.

Looking for a new pair of running shoes? Check out our favorite picks for women:

Up Next: First Look: Under Armour’s 2018 HOVR Running Shoes