The 40+ miles across the Grand Canyon and back, known as the ‘Rim-to-Rim-to-Rim,’ is an iconic route, and one not to be underestimated. 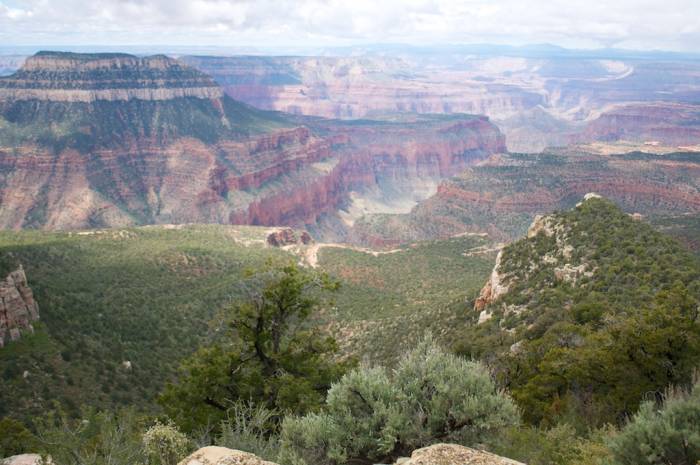 In April, I met my friend Kurt Decker and a group of other Minnesota and Colorado runners in northern Arizona. Our goal was to run the Rim-to-Rim-to-Rim (R2R2R) double-crossing of the Grand Canyon.

The 40-plus mile route is an out-and-back, starting and ending at the south rim near the visitors’ center and village and turning around at the north rim. It has more than 10,000 vertical feet of gain and loss each.

Though no official race is held on the route, the R2R2R’s popularity has skyrocketed alongside that of iconic ultramarathons like the Western States 100. During the prime R2R2R seasons of early spring and late fall — ideally after ice has melted from the trail but the bottom of the canyon isn’t too hellishly hot — there will be runners attempting the route nearly every day.

Here are a few things I learned along the way.

There is more than one route

There are two main trails down from the south rim, which converge at Phantom Ranch Ranger Station in the bottom of the canyon (where the North Kaibab trail runs the rest of the way to the north rim): The shorter and steeper South Kaibab trail, and the longer, more gradual Bright Angel trail.

The longest but least-challenging route is to descend and later return up Bright Angel (roughly 46 miles); the shortest but most challenging – as well as the route preferred by speed record-chasers – is to descend and later climb South Kaibab (42 miles). Our group mixed it up, descending down South Kaibab but opting for the more forgiving Bright Angel on the return (44 miles).

Altitude is a factor

I knew the Grand Canyon is about a mile deep, but for some reason that didn’t translate into an altitude difference in my head – maybe it was the lack of mountains, which I usually associate with elevation. Anyway, the south rim sits around 7,200 feet – higher than Colorado’s Front Range – and the north rim is over 8,200 feet.

Down on the bottom, the Colorado River is at about 2,400 feet. That means running gets a lot easier as you’re descending – but it gets a lot harder as you climb. Ascending nearly 5,000 feet after a long day is already a stout challenge; don’t forget to account for the thinning air as well.

But what constitutes an “organized group” is pretty unclear. If in doubt, contact the park office.

The Canyon is a unique and terrifying challenge

Climbing a mountain is hard, but at least you can quit and go back down. (I know most climbing accidents happen on the descent – I’m saying the effort is less to descend.) Not so with the Canyon; every step in must be matched with a more difficult step out, and the rising temperatures and beating sun don’t make it any easier. If things go wrong, you likely won’t be able to drag yourself out. I’m pretty able-bodied, but this place intimidated me.

On a related note, the temperature at the bottom of the canyon, especially on the exposed sections between Phantom Ranch at the north rim ascent on the North Kaibab trail, can really make or break your run.

I’ve heard stories of 105-degree heat putting whole parties in the hurt bag with cramps, puking, and heat illness. Combine that possibility with the fact that you’re literally in a mile-deep hole, and weather is rightfully a logistical anxiety. Luckily, we had near-perfect conditions, with the bottom topping out around 85 degrees. Plan ahead for heat management in case you aren’t as fortunate.

Oh, and in the spring and fall it can snow like crazy and temps can be frigid like GearJunkie found out during the recent Grand Canyon 100.

So, basically, be prepared and know the forecast.

Scratch that, the water faucets are everything

The scariest moment of the day for me was topping out on the north rim (after a climb that took way longer than I expected), flipping on the water faucet at the trailhead to refill my bottles and pack, and…getting a slow gurgle. If I couldn’t refill here, it was a long, hot trip back to the next water source.

It wasn’t that we didn’t plan ahead – a sign at the backcountry office had indicated every faucet but one on the North Kaibab Trail was on. And sure enough, after a minute of slow trickle, the faucet sprang to life and filled my bottle with the coldest water I had ever tasted. The point is, there are faucets, but make sure they’re on and plan accordingly before you go.

If heat illness, dehydration, or exhaustion doesn’t do you in, there are several points on the climb to the north rim where the side of the trail drops off in a sheer cliff, a thousand or so feet to the rocks below. The trail isn’t any more challenging there than the rest of the canyon, but take extra care not to trip on this climb and the return descent.

Choosing to enjoy the scenery rather than bust ass, our group ran the 44-mile route in about 13 and a half hours. Still, we were pretty beat. One member of the party broke off and dipped just under ten hours; had I properly trained, tapered, and run at an effort that left me in a slovenly puddle at the top of Bright Angel, I estimate I could have run a similar time.

In 2013, Rob Krar, now 38, of nearby Flagstaff, Arizona, announced himself as an ultrarunning force by crushing the previous R2R2R fastest-known time (FKT) by about half an hour, covering the 42 miles in 6 hours, 21 minutes and 47 seconds – almost four hours faster than I figure I could do at my best, assuming the extra two miles we ran are canceled out by the more forgiving incline we took.

The only other time I ran the same route as Krar, we were both competing at The North Face Endurance Challenge 50 Mile in San Francisco in 2013; Krar won in 6:21:07 – really close to his time in the canyon. I was just over two hours behind, in 8:24:21.

Somehow, on a route that would take me at least 90 minutes longer to complete, Krar nearly matched his (pretty stout) time at TNF 50 while running his FKT over much ruddier terrain (South Kaibab is riddled with logs, rocks, and potholes from mule traffic, over which Krar can be seen gliding effortlessly in the below video. It’s a testament to the kind of rare day he had – and the kind of rare talent he is.

The Canyon is incomprehensibly huge

I didn’t respect the Canyon at first. I don’t mean I didn’t carry enough water or sunscreen – I meant it was never an item on my bucket list. Everyone goes there when they’re a kid, I reasoned, so it must not be that cool.

I was at and in the Grand Canyon for almost a week total, and I didn’t come close to seeing the whole thing. Every glimpse at a far-away wall or the river a mile below was exhilarating and exhausting. Yet the smallest details – the fossils and sedimentary layers in every tiny rock – were equally mind-blowing. If you want a new appreciation for how big the world is, and how small we are, go there, even if it’s not to run 44 miles.