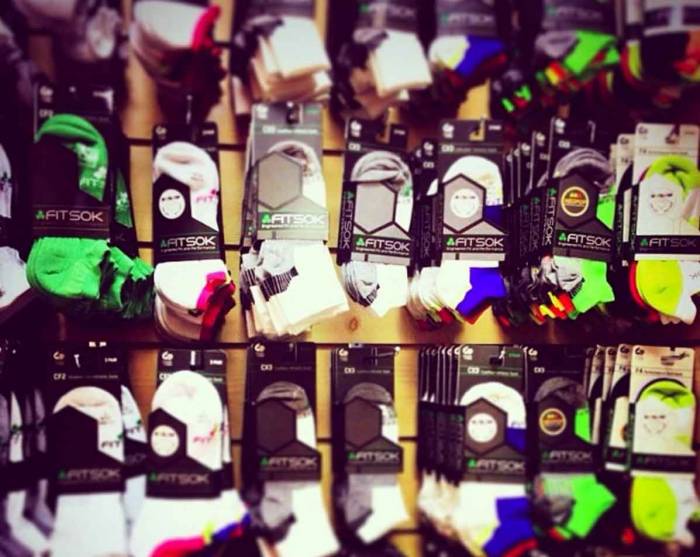 [leadin]Finding a niche is difficult, competition is fierce, and you live and die by the decisions you make. For the right personality, like Fitsok’s Jeff Bull, it might be the best job in the world.[/leadin]

In 2007, Jeff Bull was 27 years old and had a budding career in the action-sports world, working for Surfer Magazine. But as exciting as that might seem, it wasn’t fulfilling to Bull, who wanted to make his mark in the industry.

So, when an opportunity arose to start a running sock brand called Fitsok with former Nike sales guru Bill Flaherty, he jumped at the chance. “The opportunity to build something new was exciting,” Bull said.

The last nine years have been lean, stressful, and busier than he thought possible. But he wouldn’t have it any other way.

We spoke with Bull about the ins and outs of starting a gear brand — the pros and cons of being your own boss, how much a massive global recession ages you, and the difficulty in coming up with an idea that will sell.

The beginning is lean and it requires creativity (and patience)

In order to maintain its core vision without interference from outside voices, Fitsok’s founders didn’t get a bank loan or investors when they started, Bull said. So they had to be extra resourceful. “We met at our houses and in coffee shops for the first seven months,” he said.

A big hurdle was that the brand could not afford a shipping location or warehouse for a while, either. “Our first ‘warehouse’ was an empty room in the back of the Chanhassen Dinner Theater in the Minneapolis suburbs. We’d be preparing boxes for shipping and could hear the actors and musicians rehearsing through the wall,” he said.

Finding a niche only seems easy in retrospect

This is business 101, but if you want to start a gear brand, your gear has to offer something no one else’s does — new or improved technology, unforeseen convenience, or a better deal. It takes work and luck to go the first route; you’re effectively an inventor at that point. But the latter two just take some creativity.

In the mid-2000s, and still today, running stores mostly sold high-quality, expensive socks in single pairs. Bull and Flaherty recognized that while most runners might invest in a pair or two of high-quality, high-tech socks for winter running or a special race, runners weren’t going to fill their drawers with socks that cost $15 for a single pair.

At the same time, “multi-packs of socks were frowned upon,” said Bull. “They were seen as lower quality, and most of the time they were.” But Bull and Flaherty decided they would try to walk the tightrope: make socks that are high-quality enough to be well-regarded by run specialty staff (and, in turn, their customers), but cost-effective enough to be sold in a pack of three for the same price as a single pair of Smartwool or Drymax.

They didn’t have to reinvent the wheel, but they did have to come up with something that wasn’t being done. In retrospect, filling this niche seems incredibly obvious. But in the mid-2000s, it was going against the grain.

You get to create your own core values

A lot of brands’ appeal today, especially in the outdoors and gear worlds, is the deliberate shirking of the “grow-as-fast-as-possible” approach for more sustainable, community-oriented practices. This includes things like using sustainable materials, local sourcing, fair trade, and so on.

“It was awesome to develop our own core promises when we started: Be in stock, ship on time, and provide awesome customer service,” Bull said. “As time goes on, we continue to focus on those promises, and it’s paid off with growth.”

Fitsok also decided to keep its emphasis on independently-owned run specialty stores and to manufacture with a family-owned mill in North Carolina. “They ran, biked, and shared the same passions, and they had a ton of expertise in creating technical products,” Bull said. “For us, it was an easy decision to work with them exclusively.”

In other words, Fitsok started small, and they decided to remain small.

But sticking to those values can be hard

It was easier for Fitsok to commit to staying small when no one knew who they were.

“What’s tough is when an opportunity comes along that could offer a huge payday but it doesn’t fit our brand personality or our core promises,” he said. “We’ve had chances to do large stuff, but we’ve had to turn it down to stay focused on our customers.”

Put another way: “’Staying in your lane’ is important, but I’d be lying if I said a big order was easy to turn down,” he continued.

The economy is what you make it

In 2007, a global economic meltdown was imminent. Bad time to strike out in the free market, right?

It depends. For whatever reason, the running industry took off in the early 2010s, just as it had in the late 1980s.

“For us, starting a brand during the recession was a double-edged sword,” Bull said. “Things were tight for a lot of consumers and retailers, but our brand was compelling as a startup. Looking back, it definitely forced us to be focused and wise with our energy and limited budgets.”

Working for yourself has its ups and downs

When your ship is small, you feel every wave. There’s a pretty steep adjustment when starting a brand and working for yourself compared to working for a larger company further down the chain. “Consequences, good or bad, are felt immediately,” said Bull.

He also pointed out you have to earn the accouterments that might normally come with a larger company. Health insurance? 401k? That’s yours to figure out.

“There aren’t a lot of cushy benefits,” he said. “But there are a ton of intrinsic rewards.” Namely, being the master of your own ship, however rocky the seas.

You live for customers to have a good experience – and it’s crushing when they don’t.

When you’ve founded a brand, you’re more invested in its outcome – not only financially, but in the quality of the products and the experience of runners, climbers, campers, etc. like you.

So when your customers have a good experience, Bull said it’s tremendously affirming. But when they have a bad experience, it can feel like a more personal failure.

“Nobody likes to let people down, but it’s bound to happen from time to time,” Bull said.

But that’s where being in charge pays off – you, personally, can right the ship.

“Some of our best alliances have been forged by making things right with customers,” Bull said. “The best brands shine brightest when they’ve made mistakes and go the extra mile to make things right.”

You have to sell yourself

“As we look forward, we realize smaller specialized brands must get creative to compete with the Under Armours and North Faces of the world,” Bull said. “Our product is unique, specialized, and extremely high-quality…[but] our challenge will be ensuring retailers and customers can find us, and we deliver on our core promises.”

It’s (a little) easier in the digital age

Starting a brand, Bull said, is easier today than founding a brick-and-mortar retail store. The reason? The Internet.

“I do think [starting a brand today] is a much different undertaking, especially if you’re selling direct online,” he said.