The Western States 100 is an iconic endurance run. In 2018, Dauwalter won the race. Now, she’s back for more.

Dauwalter won the 2018 Western States with a time of 17 hours, 27 minutes, the second-fastest time for a woman on record. Running 100 miles in under 18 hours is no easy feat. And in 2019, she went back with the determination to be faster: to set a course record. But as any runner knows, anything can happen.

In this short film, we follow Dauwalter’s journey through the “unpredictable” 2019 Western States. “I’m mostly just excited to finally stop thinking and talking about the race and just be out running and doing the thing I love,” Dauwalter narrates as runners approach the starting line.

The film is a great glimpse into what actually goes into running an ultra. It’s not just about training, it’s about your support crew, mental stamina during the race, and, of course, those unpredictable moments that can throw a wrench in the whole endeavor.

And around mile 68 was when things began to change. 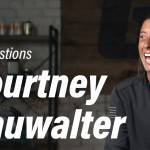 You Hallucinated What?! 21 Questions With Courtney Dauwalter

Maybe the only thing more impressive than Courtney Dauwalter's domination in ultraraces is what she sees after hours of nonstop running. Read more…