ENO started by selling gathered-end hammocks made from parachute material at concerts and festivals. And this light and comfortable style quickly took off, sweeping up core outdoor enthusiasts as well. Since then, a plethora of competitors has pushed the category with upgrades like bug nets, rainflies, even purpose-made sleeping pads and underquilts. 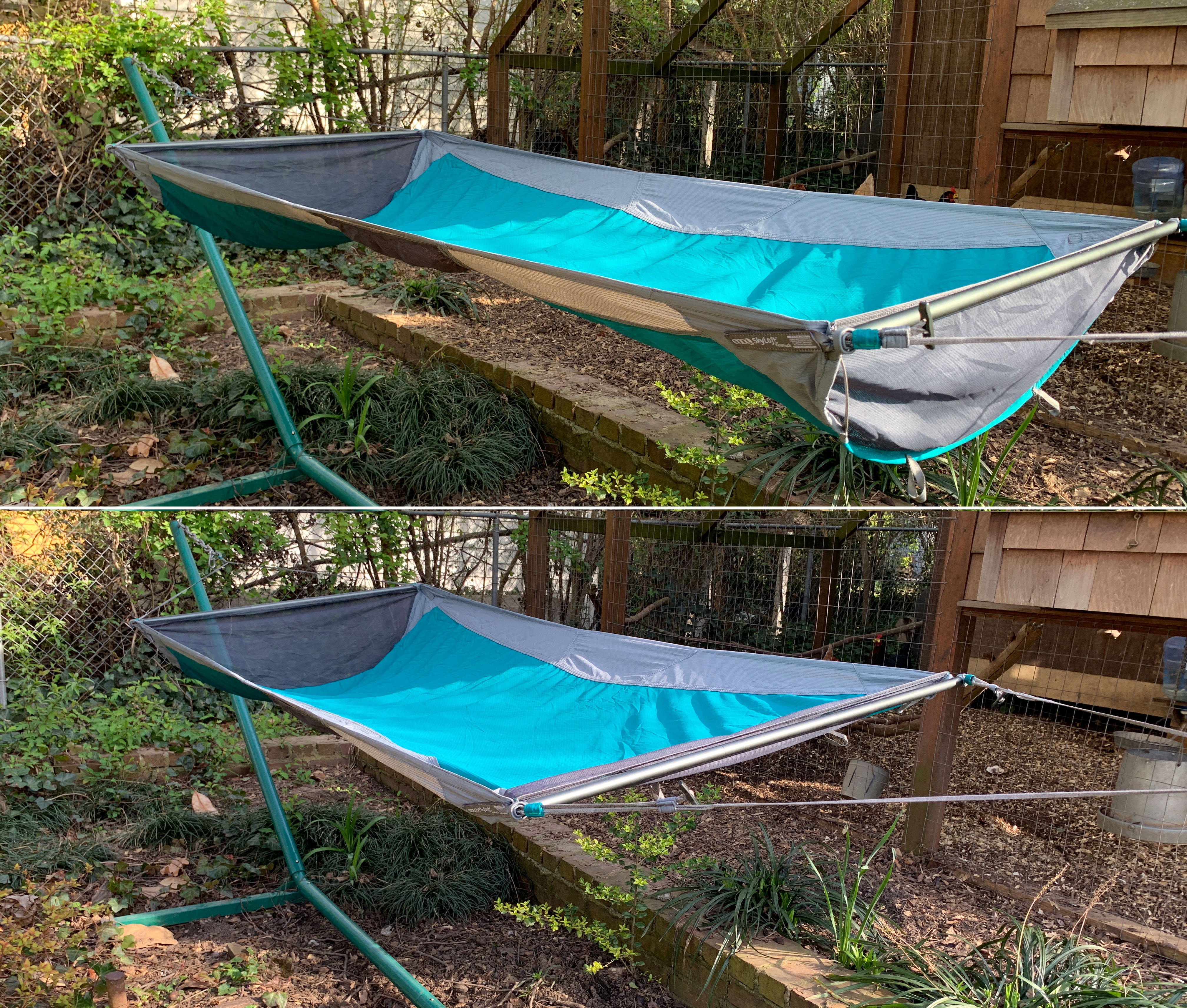 Now, ENO tackles one of the few lingering hammock complaints: taco-ing. Those who don’t want to be folded widthwise have had to lie down diagonally to achieve a flatter position. This year, ENO addressed this with the SkyLoft hammock. It employs spreader bars at either end to provide a lay-flat design.

We took it for a swing to see if it really is a more comfortable way to hang.

In short: If you’re tired of trying to relax in the cramped position that most camping-style hammocks provide, and you don’t need an ultralight option for extended backpacking trips, ENO’s $130 SkyLoft merits a look. It’s quick to deploy, super comfortable to lounge or snooze in, and easy to pack up when rain threatens. For car camping fans and people who want an update to the traditional patio hammock, the SkyLoft is a modern, slick take on the lay-flat design. 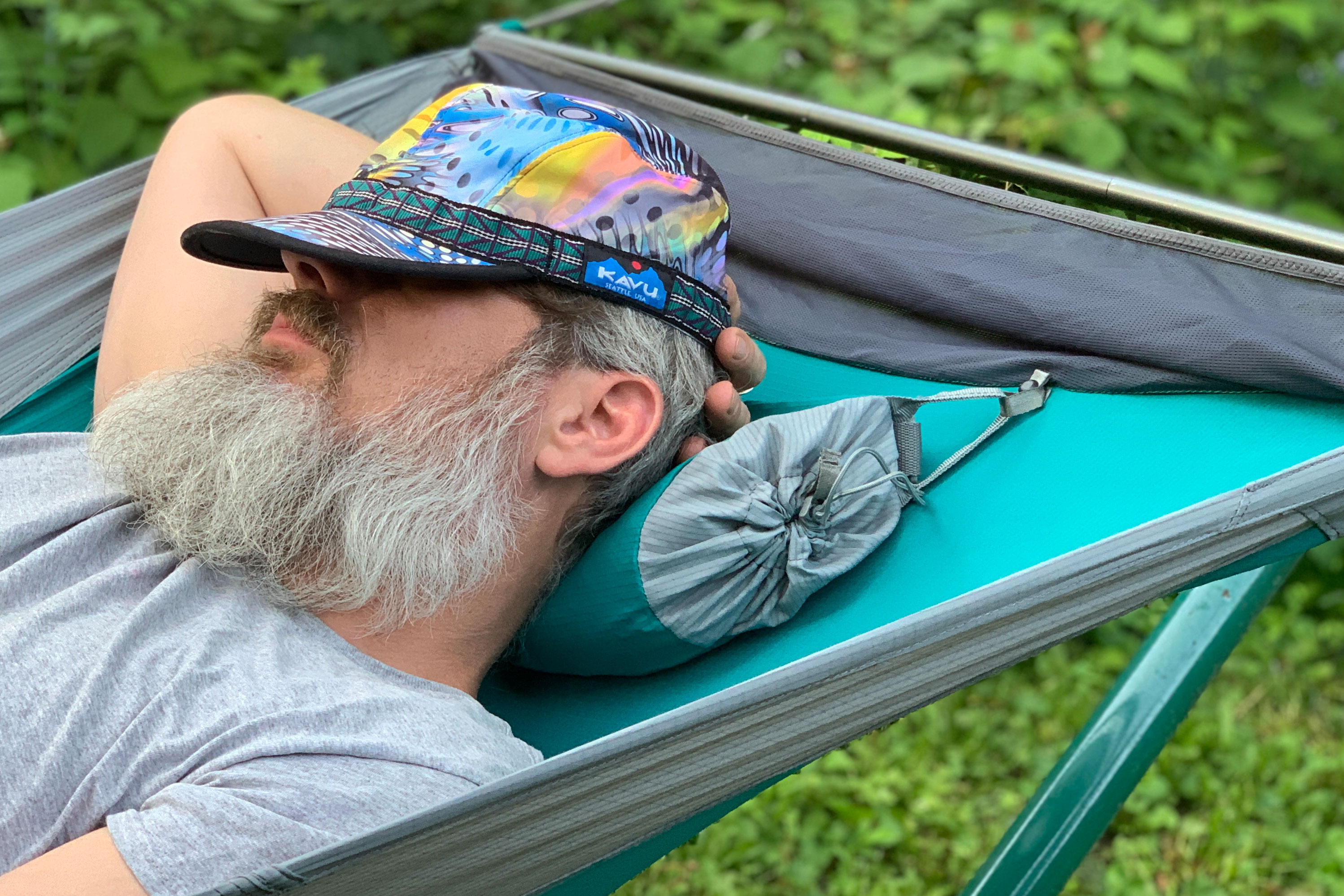 NewWave nylon, a light and breathable fabric, makes up the SkyLoft. This fabric mates with superlight and strong Dyneema lines. In total, the SkyLoft measures 7 x 3 feet and weighs 2.9 pounds. ENO advertises a 250-pound weight limit for loungers.

Beefy, collapsible DAC aluminum-alloy spreader bars integrate into each end of the hammock. Happily, this makes them all but impossible to lose. And as a neat bonus, the included stuff sack doubles as a pillowcase, its two webbing loops locking into place via two handy snap loops. 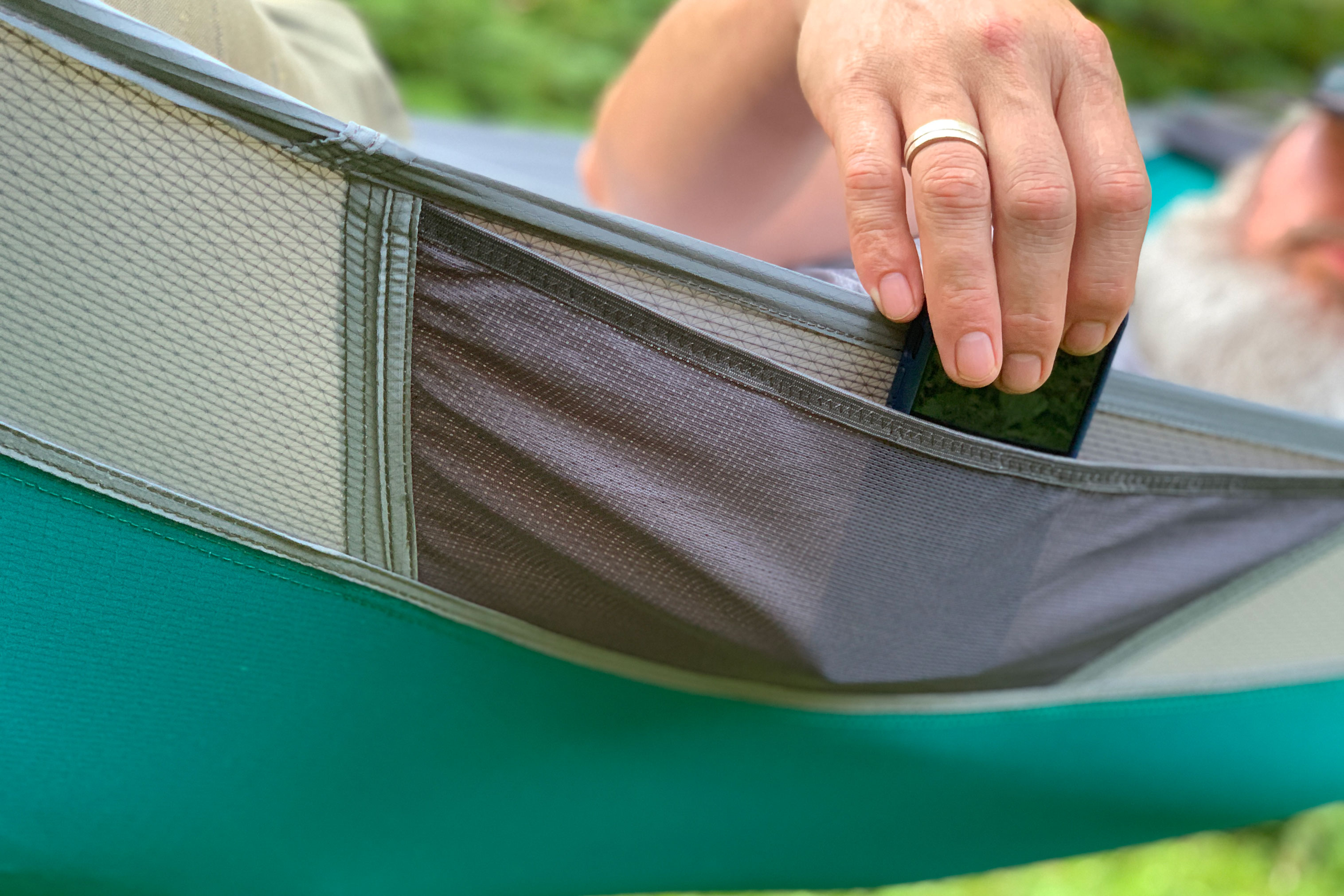 Two mesh pockets sit on the outside edge of the hammock, allowing for some storage. Because they rest on the outside, however, I experienced some fumbling, twisting, and turning to locate smaller items. So you mostly need to pick items out by feel. I would prefer to have one pocket on the inside for things I use more often and one on the outside for seldom-used gear.

I found the setup fast and simple, especially because the built-in collapsible bars remain attached to the hammock and quickly snap into place.

The carabiners are light and strong aluminum, but the hammock doesn’t come with any suspension straps. For this, ENO has multiple options, ranging from $20 SlapStraps, which won’t work on trees, to the ultralight, super-strong $35 Helios system.

Because the SkyLoft weighs almost 3 pounds — plus the weight of straps, a rainfly, and a bug net — it’s not really meant as a backcountry hammock. It’s more for car camping or backyard luxury than something to add to your backpacking kit.

But in its right habitat, the SkyLoft offers some cool features. It has the ability to turn from a relaxing position to a sleeping mode — although it’s up for debate exactly which is which. 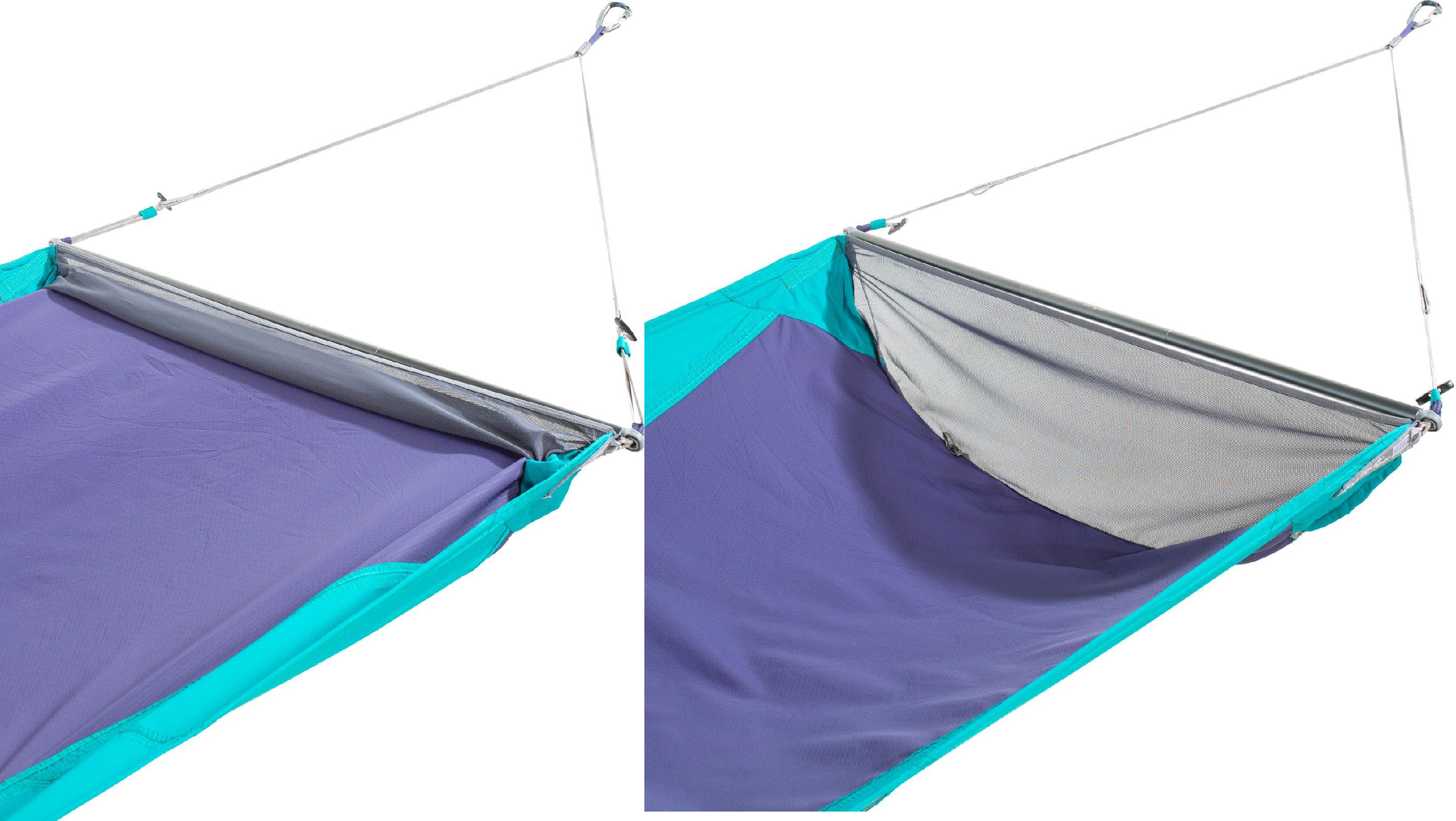 In the “lounging” configuration, two toggles gather up the head of the hammock. This puts your body in a bit of an incline, with your feet lower than your head. For sleep, just release the two toggles and the head sags down a bit, though it’s still higher than your feet.

I loved both modes. In each configuration, the Skyloft proved more comfortable compared to the usual bendy feel that most sling-style camping hammocks provide. And despite the names, I found that either mode was comfortable enough for sleeping or relaxing. Individual users will likely decide which configuration works best for them.

Hammock fanatics, whether focused on backyard or campsite hangs, will be sure to bliss out from the comfy, quick-to-set-up ENO SkyLoft.