Sweet natured, straight-banged, straight-A. One of the fiercest climbers on the planet is a teenage girl raised in the Big Apple: Ashima Shiraishi is climbing’s newest pop star. But what do her remarkable records mean for the sport?

Born in 2001, now 88 pounds at age 15, and a tad over five foot tall, Ashima Shiraishi is a lean, lighthearted powerhouse. She climbs five days a week, on about 5.5 hours of sleep, balancing school with a burgeoning career as a pro climber.

Myself a mountain town girl, I was 7-years-old when I first pulled on a harness outside of Telluride and crawled up rock, nearly the same age Ashima, who was raised in New York City, started spider-crawling on boulders in Central Park.

By age 13, Ashima was garnering headlines as big as “World’s Best Female Rock Climber” in media focused on the sport. In the past year, she broke into national consciousness, including a New Yorker profile by Nick Paumgarten, Today Show appearances, Huffington Post hyperbole, and, now, for better or worse, association with click-bait headlines the likes of “Let’s Stop Being Surprised When Little Girls Kick Ass.”

I had to find out more about this princess crushing the vertical scene. I reached out to some of the biggest names in climbing seeking some context on this teenager’s accomplishments for the sport and its tight-knit community around the globe.

My research corresponded with Ashima again grabbing headlines, and this time for a single notable ascent. “Without a doubt, Ashima is setting a new standard within climbing,” said Sasha Digiulian, another New York-based pro climber. “I absolutely love that she embodies the fact that women can climb just as hard as men.” 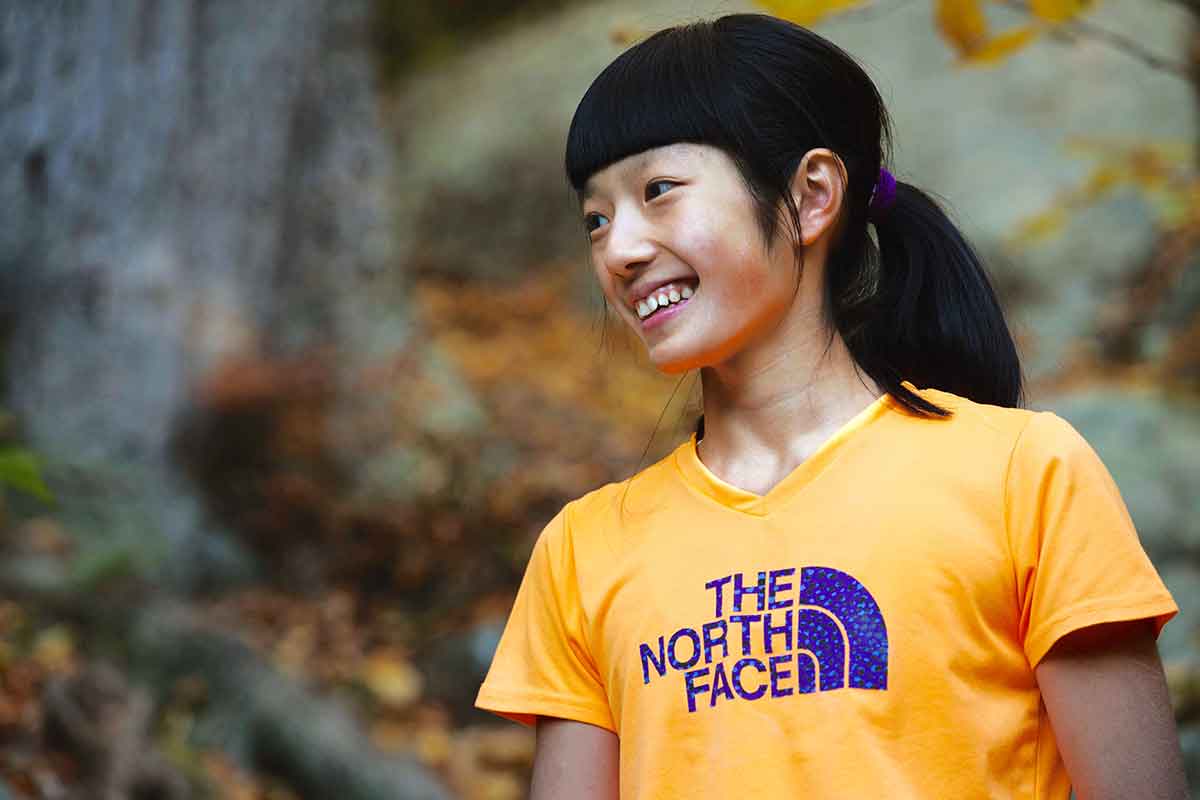 This spring, on March 22nd, the then-14-year-old sent Horizon, a line at Mount Hiei in Japan, to become the youngest person (and the first female) ever to climb a V15 bouldering route. Ashima was also the second person to send that 30-move boulder problem, period.

She was encouraged by the route’s creator, Dai Koyamada — a 39-year-old Japanese climber — to go for the problem. (Koyamada has completed at least two-dozen V15s, according to self-reported 8a.nu ascent records).

A 21st century Lynn Hill, Ashima’s accomplishments level perceptions of gender disparity between athletes, a paradigm some believe has the potential to flip-flop in climbing. “I feel that climbing is going to be a sport that females might be able to take the lead in, and it’s one of the only sports that might be able to do that,” Ashima told Vice Sports. “A lot of females have been pushing it really far.”

Her achievements redefine stereotypes regarding age. “I don’t really think of Ashima as a 14-[or 15 now]-year-old,” said pro climber Alex Honnold. “I think of her as one of the best climbers in the world.”

Honnold continued, “When I hear that she’s climbed V15, I just think of it as an amazing climber that is pushing her own limits. But it is pretty crazy!”

On weeklong school breaks, Ashima tops out on boulders and routes that have absorbed months from predecessors. At this age and pace, the climbing community is eager to see where her momentum will lead next.

“She’ll undoubtedly progress the sport to new levels given her current trajectory,” said Jimmy Chin, a veteran climber and photographer. “The whole climbing community is amazed and proud of her. We’re all excited to see where she takes climbing.”

Honnold noted Ashima’s “huge inspiration” to kids. But he also stepped back to give a bigger perspective. “Climbing is a huge sport that goes in tons of different directions,” Honnold said. “People are continually pushing the edges of the sport. Ashima is part of a long line of folks that redefine what is possible.”

Honnold shared several examples of niche achievements from 2016, which collectively and slowly progress climbing as a whole, including 18-year-old Charles Albert, who made a second ascent of l’Alchimiste (V14), barefoot (as in, no shoes on!) in January.

Beyond rock climbing, this year Marc Andre Leclerc soloed three major mixed routes on the Stanley Headwall, in B.C., in a single day. And, in 20 hours and 40 minutes, Honnold and Colin Haley completed Patagonia’s Torre Traverse, a north-to-south traverse of Cerro Standhardt, Punta Herron, Torre Egger, and Cerro Torre, blasting a mega-route that formerly took a team more than four days to complete.

As a sport grows, the progression of the athletic ability is inevitable, said Digiulian. Ashima embodies that premise, and she is a part of a new generation of climbers helping buoy growth.

Indeed, the rock climber demographic in the U.S. grew by about 12 percent from 2006 to 2013, according to a recent Recreation Participation Report from the Outdoor Industry Association. In 2015, about 40 new indoor climbing gyms opened across the country, Climbing Business Journal cites.

“More resources are available now than ever before — climbing gyms, training perspectives, access to the outdoors — and people can start climbing at any age,” Digiulian added.

Digiulian acknowledged Ashima’s gymnastic talent, learned in gyms and then revealed on rock. “A lot of technique goes into the sport, as well as strength physically and mentally, and body awareness. Since a young age, Ashima has exhibited profound ability in these factors.”

In my interview, Ashima told me she knew Horizon would be a difficult project but couldn’t refuse: “It was so beautiful that I wanted to try it,” she said, describing the boulder as an intimidating, enormous roof with an optical illusion of airplanes painted by its vibrant orange and red hues.

Imagine trying to stay calm: Climbing the roof section, Ashima’s body is laid back, completely parallel to the ground. She gracefully moves her hands, one over the other, into and up a single crack. Her toes appear to rest on barely visible holds, or they swing beneath her when the footholds don’t exist at all. Like a yogi on the wall, she looks totally relaxed. 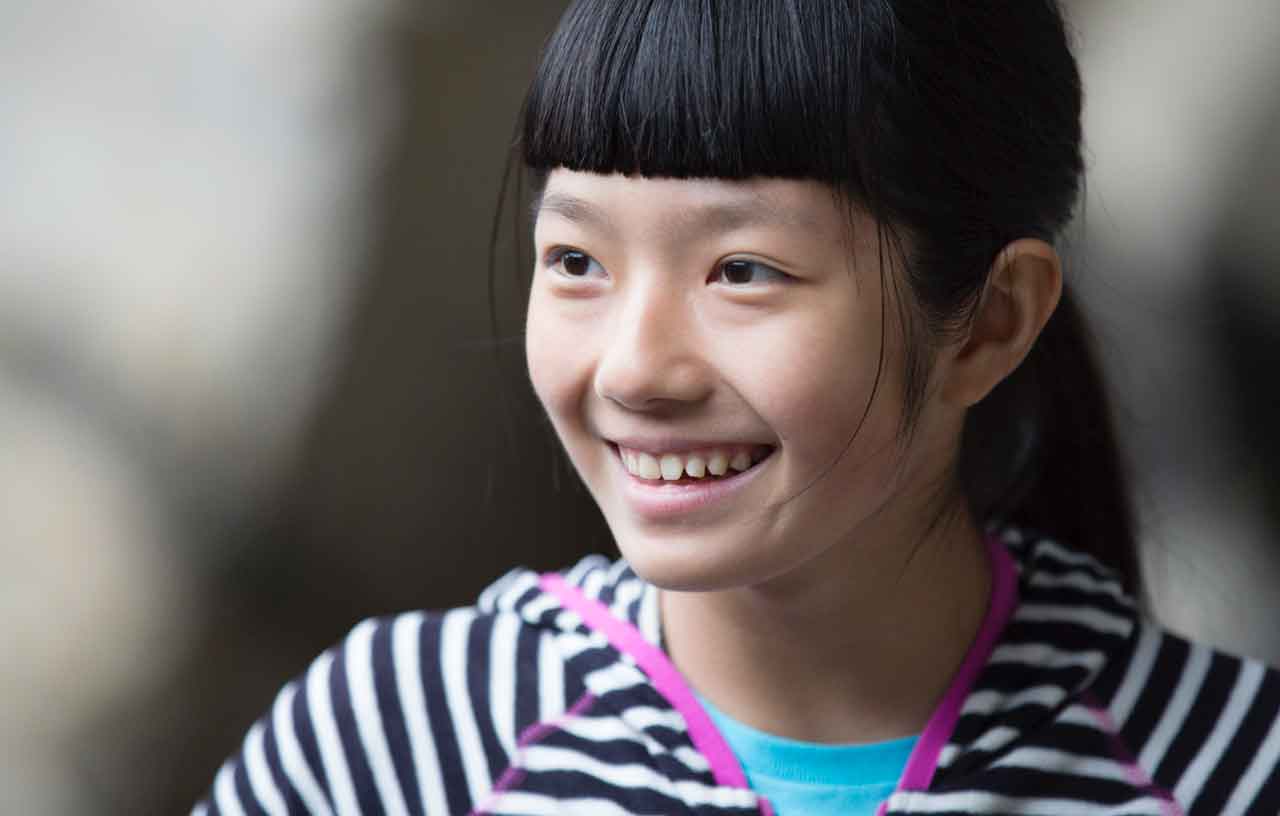 Ashima called me at 6:30 p.m. on a Thursday. Her four-hour training session of back-to-back bouldering and sport climbing still loomed ahead. Precocious and shrewd, the high schooler and professional climber’s disciplined routine barely allowed time for us to chat about her most recent milestone in climbing history.

She hits the gym, Cliffs Climbing and Fitness, in Long Island City, New York, five days per week with Hisatoshi Shiraishi, a.k.a. Poppo, her father, belay partner, and coach. Then she heads home to finish schoolwork before bed.

“Mental strength is the most important part when it comes to actually doing projects. I knew that I could get all of the moves,” Ashima said about her recent trip to Japan to tackle Horizon. She fell on the last move three times due to wet conditions, last December, her first time there. The conditions were not much better for round two.

“I was really shocked,” she said, when I asked how she felt when she solved the problem. “The rock was wet, it wasn’t in the best condition to send it. But I knew it was possible. I was really focused.”

Ashima’s mind-focus techniques are encouraged by her father, which he honed from his time as a butoh dancer, an experimental Japanese performance art born of the socio-political unrest that followed WWII. “He knows how to prepare mentally and how to relax himself, which he learned through his experience as a dancer. He has passed that on to me,” Ashima told me.

On a more relatable level, she also noted, “If you don’t remember to have fun, you will get stressed and doubt yourself.”

Two weeks later, the teen celebrated another incredible year of climbing with a 15th birthday celebration, on April 3. “I’m still a 15-year-old girl, and I go to school and am normal — I just also have a big passion,” she said, in response to how she maintains the stress of being in a global spotlight for her climbing career.

It’s a part of her identity that she doesn’t really talk about with classmates. But none of that — her age, popularity, or media pressure — seems to overwhelm or hold Ashima back.

According to Digiulian, “The single most important factor regarding the progression of an athlete’s career is passion and love for the sport. I hope that [Ashima] continues to enjoy the sport for what it is and to push her limits as far as she can.”

If career success is determined by passion, don’t be surprised if this girl becomes the first person to climb on Mars.

“I want to become the best climber in the world; that’s every climber’s dream. I want to help to inspire others to do what they love to do and to really work for it. And, mostly, I want to inspire women and young girls to not be afraid, even if they are uncomfortable at some point, and to not give up on their dreams,” the 15-year-old said.

–Contributor Morgan Tilton is an adventurer who grew up hiking and snowboarding in Colorado’s San Juan Mountains. Based in the Mile High City, she pens outdoor, business, culture, and travel stories.

Up Next: Hyalite Alpine: Climbing Ice With Conrad Anker